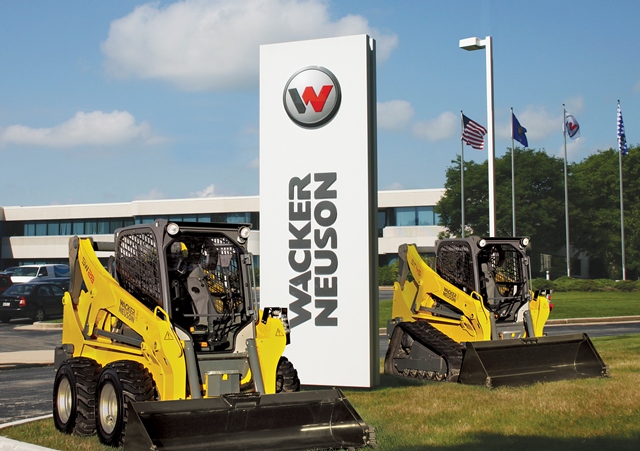 The United States is the largest market for skid steer loaders. That is good news for the folks in Menomonee Falls, Wisconsin where Wacker Neuson Group will start building its skid steers and compact track loaders starting in 2015.

Wacker Neuson’s facility will go on stream in the first quarter of 2015 and initially manufacture four models; the SW24 and SW28 skid steers and the ST35 and ST45 compact track loaders. The four models will initially only be distributed via the US and Canadian dealer network. Up until now, Wacker Neuson produced skid steer loaders at its Hörsching site in Austria.

“Our strategy is ‘in the region for the region.’ So it makes sense for us to build skid steer loaders in the region where demand is strongest – North America,” explains Cem Peksaglam, CEO of Wacker Neuson SE. “We unveiled four loader models tailored to the needs of the North American market at the start of the year and received positive feedback from dealers and customers alike. Producing these products in North America will speed up time-to-market and enable us to adapt these high-quality, powerful machines more rapidly to the specific customer requirements of this core market.”

“We took feedback from contractors and users in the region who regularly work with these machines, and channeled these insights into the development of our new skid steer loaders. Our dealers and customers were quickly won over by the high-quality components as well as the new, even more user-friendly cab and powerful performance capabilities of our skid steer loaders,” said Christopher Barnard, regional president of Wacker Neuson in North America. “The new skid steer loader series rounds off our portfolio of compact machines in North America, making us an even more attractive partner for dealers.”

With a presence in the United States since 1957, the Wacker Neuson facility in Menomonee Falls near Milwaukee was built in 1986 and recently again expanded in 2012. Covering approximately 2.8 million-sq-ft, the site is home to the Wacker Neuson Corporation headquarters and its research and development departments.

“Demand for our dumpers and excavators is growing worldwide. We will be using the free capacity at Hörsching from 2015 on to expand our dumper and excavator production capabilities here. Thus, there will be no layoffs at the site,” Peksaglam says. “Our current skid steer loader models for North America were jointly developed by teams in Austria and the U.S. So we will also have access to in-depth expertise and a wealth of experience in the development and production of skid steer loaders at the new site.”