An analysis of the American skid steer market

From Ergonomics to Engines, the Changing Skid Steer Industry of 2015

As in years past, five big brands of skid steers continued to rule the marketplace in 2014 — Bobcat, Caterpillar, John Deere, Case and New Holland — producing approximately 90 percent of all skid steer sales in North America. The inventor of the skid steer loader, Bobcat, once again was the market leader, yet in 2015 Bobcat and the Top 5 are facing more competition than ever before, with an increasingly crowded marketplace and some famous new brands (like Kubota for instance) entering the industry. This is all good news for the contractor. With more and more choices in brands, options, sizes, attachments and specialty units, the skid steer sector is growing.

“We anticipate industry sales will be up slightly in 2015 and over 2012 and 2013 numbers. We predict 35,000 to 40,000 will be sold in 2015,” explains Gregg Zupancic, product marketing manager of skid steers and compact track loaders for John Deere Construction & Forestry. “The construction industry continues to recover. Construction will continue to be a key driver in industry growth — mainly residential and commercial. We do anticipate a slight decline in the agricultural sector due to declining commodity prices.”

Since their inception in a small town in Minnesota, skid steers have grown in stature — as compact, efficient and valuable machines for worksites of all shapes and sizes. From construction sites and landscaping projects to farms and rental lots, contractors have seen an increased need for smaller, more affordable and more versatile machines to conquer their ever-evolving jobs. Simply put, skid steers and their tracked counterparts called compact track loaders are the bedrock of the North American tool carrier category.

In 2015, there will be (at least) 14 major brands of skid steers in North America: Bobcat, Case, Cat, Gehl, JCB, John Deere, Mustang, New Holland, Takeuchi, Terex, Volvo, Wacker Neuson, Yanmar and (this spring) Kubota. There are some manufacturing supply agreements here. For instance, JCB custom manufactures Volvo’s skid steers and Terex does the same for Takeuchi, but overall most of these brands have fairly unique and large product lines. Case for example sells nine different skid steer units. 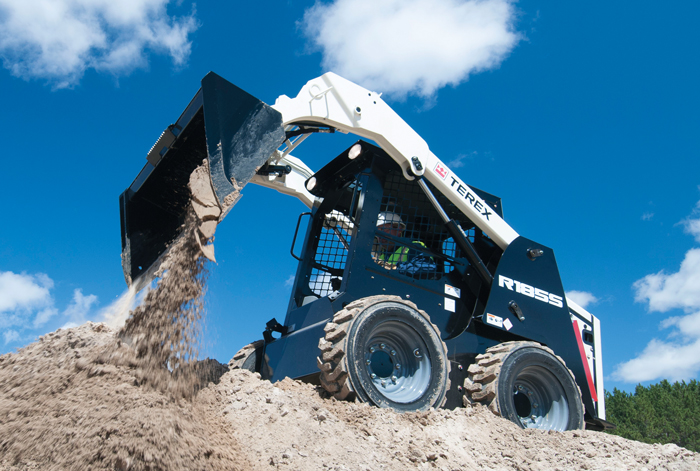 For all manufacturers, engines, operator usability and comfort have been priority upgrades over the past several years. Terex’s Generation 2 skid steers for instance come with 100 upgrades.

“Skid steers with an operating capacity ranging from 2,201 to 2,701 lbs continue to move the highest volumes,” says Warren Anderson, brand marketing manager at Case Construction Equipment. “This size class is particularly popular because it provides a range of capacity that performs a high percentage of tasks commonly associated with skid steers, but in a footprint smaller than larger-framed models. There is, however, a general movement to larger models. For instance, there is a noticeable increase in sales for models in the 2,701- to 3,150-lb size class as owners generally look towards larger machines.

“Case moves more volume in radial lift arm designs because we have a higher percentage of models in that design. However, as a general rule of thumb, radial lift machines continue to be popular for those who use the machines more for digging, prying, grading, dragging and back-filling. Vertical lift machines continue to be the choice for customers more concerned with lifting, hauling and unloading.”

Trends continue to evolve. We predict that skid steers (being the versatile, high-tech, hydraulic machines they are) will see market share begin to dilute. There are so many great brands. Germany’s compact equipment king, Wacker Neuson, just released an excellent set of skids steers and track loaders in 2014. We’ve heard rumblings of JCB (with its unique one-arm skid steer design) putting a supreme marketing focus on the American market in 2015; we’ve also watched JCB expand its dealer network to 260 plus outlets. Terex continues to sell its Generation 2 skid steers (with 100 upgrades) to its expansive dealer network and through manufacturing agreements; Terex also private labels a forestry compact track loader for Vermeer Corp. But most of all, Kubota getting into the skid steer market has manufacturers lifting their collective eyebrows. Kubota will only be releasing two units this spring (the SSV65 and SSV75), but the company already makes half the engines for everyone else.

“Our innovation, our engineering, and our quality that you see in all of our products over all these years has carried over into our skid steer machines,” said John Ryan, construction equipment business development manager, at the Kubota dealer meeting last October. “Just look at our excavators and our [compact track loaders]. They’re excellent and well-engineered machines, and we don’t have issues with them. And like you said, we already build the engines for everybody else — a lot of other manufacturers. No one provides us our engines. We build our own engines, and once again we’re moving onto building the entire machine.”

Of course, engines are an increasingly big deal in 2015. Tier 4-compliant diesel engines will affect every category of construction equipment this year. Here’s a refresher: The most stringent yet of the EPA’s regulations for off-highway diesel engines, known as Tier 4 Final, will be hitting the majority of small power ranges in 2015. Tier 4 Final will have diesel designers from Kubota to Perkins creating smarter, more complex and cleaner-burning engines for skid steers, but these engines will come at a significant price increase.

“At Terex, we believe that 2015 will continue to be a steady growth year for the skid steer loader market thanks to stabilized economies in both the U.S. and Canadian markets, as well as the introduction of Tier 4 Final units this coming year,” says Jonathon Ferguson, Terex regional sales manager. “We predict that non-diesel particulate filter [DPF] units will continue to be in demand, and rental companies along with general construction contractors will buy up the market supply of Tier 4 Interim machines to get ahead of the added cost of Tier 4 Final solutions — particularly electronic engines — before all new units under 100 horsepower will have to be Tier 4 Final in 2015.”

Skid steers will also see the introduction of diesel exhaust fluid (DEF). DEF is used in what’s called a selective catalytic reduction (SCR) system, an after-treatment technology integrated into new diesel engines to reduce NOx emissions by using a urea-based additive. The ammonia in the urea mixes with engine exhaust gases in the SCR’s catalyst, converting NOx to nitrogen and water vapor. 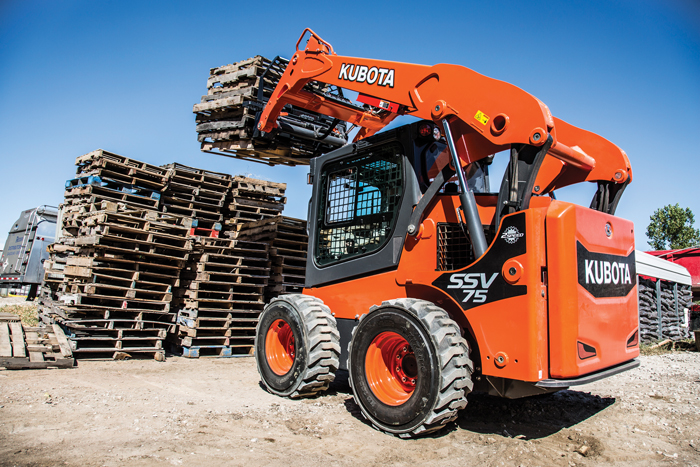 “We will introduce the first Tier 4 Final model skid steers to ever use selective catalytic reduction technology,” says Anderson. “Whether it’s the particulate matter catalyst found in high-volume models like the SR210, or the brand new SCR solutions found in Tier 4 Final models such as the SR270 and SV300 — the goal has been to introduce models that require minimal input from the operator. The particulate matter catalyst solution requires no additional fluids and filters or maintenance for the operator to worry about, and the SCR solutions only require operators to remember to top off the DEF tank when they refill their diesel.”

For all manufacturers, engines, operator usability and comfort have been priority upgrades over the past several years. Two years ago, Caterpillar released the first skid steers and track loaders with a rear camera, another indication of the technology progression of these historically low-tech machines. Increased horsepower, next gen engines, sophisticated digital control panels, attachment automation and creature comforts have all been priorities. Cabs are now considered all-day offices with pressurized cabins, air-ride and heated seats, air and heat options, satellite radio and ergonomic controls that make operators feel like they are in the driver’s seat of their own car.

“Opulent cabs are an increasing commodity on today’s jobsite,” explains Zupancic. “The most important aspect of a cab, affecting both physical and mental comfort is visibility. The key to opulence is visibility that allows the operator to have full access to their worksite and the task at hand.”

Routine tasks such as boom settings, attachment speeds, hydraulic flows, wheel speeds, ride control and return-to-dig functions can be automated into your electro-hydraulic joysticks, engineered into the armrests, which can be adjusted for your perfect comfort level. “An electrohydraulic control package allows the operator to switch to ISO, H-pattern or foot pedal controls for operation with the simple push of a button,” says Zupancic.

Digital interfaces allow operators to individualize and save these machines settings, change languages, add security measures and (now) even display a backup camera. Telematics systems can be installed to track and log all machine functions, spearhead maintenance schedules, perform security measures like geofencing and (eventually) help operators operate better. Contractors are spec’ing their machines to improve productivity and versatility, which means some of the most progressive attachments systems in the tool carrier market.

Quick-attach mechanisms now allow the operator to change attachments without leaving the comfort of the cab. Speeds can be set to match the performance of an attachment, like a trencher or cold planer, with the push of your fingertips and a digital control panel. Manufacturers are also responding to the demand for high flow attachments (like mulchers or asphalt planers) that run on up to 44 gpm of hydraulic flow, handling jobs that once were reserved for more expensive, specialized machines.

Of course, we must not forget about compact track loaders (skid steers engineered with a dedicated track undercarriage). CTLs continue to affect skid steer sales.

Keith Gribbins is associate publisher of Compact Equipment, based in Brecksville, Ohio.