Hydraulic Toolbox: Learn How to Use Hand Tools Off Your Skid Steer or Track Loader 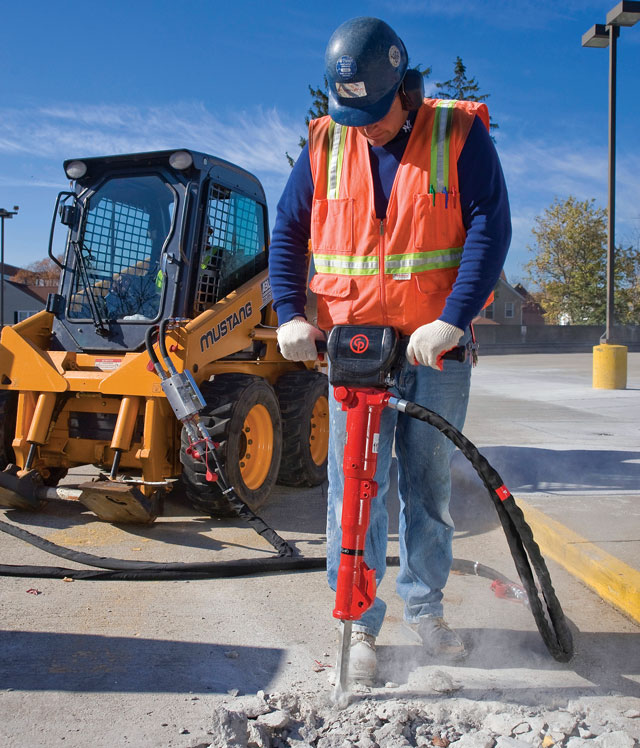 Envision the scene: A worker is sent to an area of a jobsite to reface jaggedly broken edges of old pavement and to chip away and smooth the ragged surface of a legacy wall and, afterward, to haul away the resulting debris. In addition, steel posts need driven to fence off the side of the worksite from an adjacent sidewalk area. What tools should be utilized? The worker has three choices. First, the tasks could be accomplished with old-fashioned hand tools, such as a maul, sledge and chisel. A laborer simply would place the tools in the bucket of a skid steer, rumble over to the work area, unload and start banging away. In most cases, the tools would get the job done but not quickly. Productivity will suffer.

A faster and more efficient approach would be to utilize hydraulic tools — specifically a chipping hammer, breaker and post driver. The added force of the hydraulic fluid under pressure dramatically enhances the process. The worker would dump the hydraulic tools in the bucket of a skid steer, add a portable diesel-powered auxiliary hydraulic power unit, a container of diesel to keep the auxiliary unit running and a length of hose to connect hand tools and power unit. The skid steer would move to the work area, and the worker would start working. Much more productive.

A third choice, however, would be even more productive, yet is uncommonly employed. This option would have a worker carry the hydraulic tools to the work area in a skid steer or track loader bucket, then plug a tool’s hose directly into the hydraulic system and go to work. No auxiliary power unit. No extra fuel in a can. No muss. Just plug in the hose and chip away. Though the option is simple, it is not widely practiced.

“The auxiliary hydraulic hand-held tool kit is not a huge seller for New Holland since the economic slowdown,” says Tharen Peterson, skid steer and track loader product specialist for New Holland Construction. “However, as the market grows, we will continue to offer this economical and versatile option to owners to increase their efficiency on jobsites.” 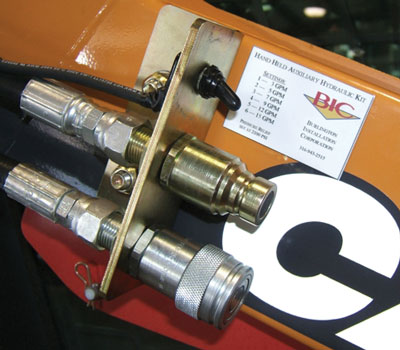 New Holland and Case — two equipment brands now congregated under the CNH Industrial banner — apparently are the only major manufacturers that will factory-install the auxiliary hydraulic hand-held tool kits in skid steers. Half a dozen other manufacturers do not give their customers the option of a factory-installed kit, though some of the manufacturers once did. For example, the Gehl and Mustang skid steer product lines — two compact equipment brands now part of Manitou Americas — offered the kits a decade ago along with a line of Stanley hydraulic hand-held tools, but the companies no longer do, according to Ron Peters, product manager at Manitou.

For more than 25 years Burlington Installation has built and factory installed auxiliary kits for New Holland and Case, while Coneqtec offers the same services for Cat, JCB and John Deere. The kits are offered for both skid steers/track loaders and backhoes. The hydraulic hand-held tool kits for New Holland and Case equipment represent some 10 to 15 percent of Coneqtec’s business, according to Adam Runner, Coneqtec’s special projects manager.

Coneqtec’s auxiliary hydraulic kits are either delivered to the field for installation by end-users or are installed by factory techs at the company’s Wichita factory or its facility in Burlington, Iowa. To order a kit, a customer supplies a serial number for a skid steer, track loader or backhoe model to BIC’s team, and the kit is produced to fit the machine.

Most of the valve parts of a kit are located in the body of a skid steer/track loader near the hydraulic pump, which is tapped. From there a set of hydraulic fluid lines are run to the front, usually on the loaders’s right-side lifting arm. A hose reel can be affixed to the side of the loader as well.

Though New Holland’s Wichita factory builds skid steers for its international market, the kits target only U.S. and Canadian markets because regulatory standards are different abroad. “We don’t get too many international calls for it,” says Peterson. He adds that the most demand for the auxiliary kit is by contractors doing road and bridge work or by municipal crews. “They have a tool for a task and need hydraulic power for it. A skid steer typically is already on the jobsite, so they plug into it. They simply are trying to get more done with less.”

Some tasks can be better accomplished with one worker in the seat of a skid steer or track loader and another one at the end of the hose using the hand tool. For example, driving a series of fence posts might be more efficiently done using two or more workers. However, a single operator can operate a post driver, breaker or some other tool connected to a skid steer. The skid steer operator just throws an over-ride switch in the cab before climbing out. With the switch thrown, the machine will keep the hydraulic pumps running even though no one is seated at the controls. 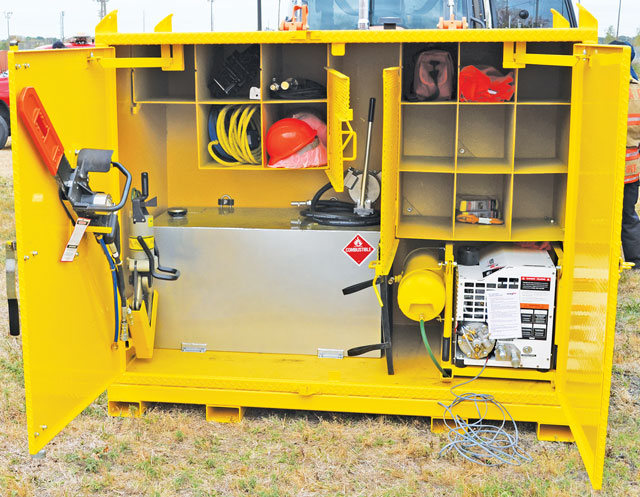 “It is like any other heavy piece of equipment, of course,” Runner says about operating techniques. “You need to maintain control of the skid steer. If a second person is in the skid steer, he can respond if there is an issue.” But he concurs that one person can park the skid steer, climb out and utilize the hand tool, while “always paying attention to the warnings on the hand tools themselves.”

Peterson acknowledges the auxiliary kits were more in demand in earlier years than they are today. The kit today is more popular on backhoes than on skid steers or track loaders. “It hasn’t taken off as much with skid steers, maybe because they have a plethora of attachments.” He added that being contacted for this article has spurred him to review his marketing of the kit. “The hand-held hydraulic took kit is a great option. It will give the operator a lot of versatility at a low price. With the market rising, it’s a great time to promote it.”

A ballpark price for a skid steer auxiliary hydraulic kit is $1,500 to $2,500, according to Runner. That is roughly equivalent to the cost of a 5- to 10-gpm portable hydraulic power unit. The difference is, when an equipment operator taps into the skid steer’s own hydraulics, he doesn’t have to pack around the power unit.