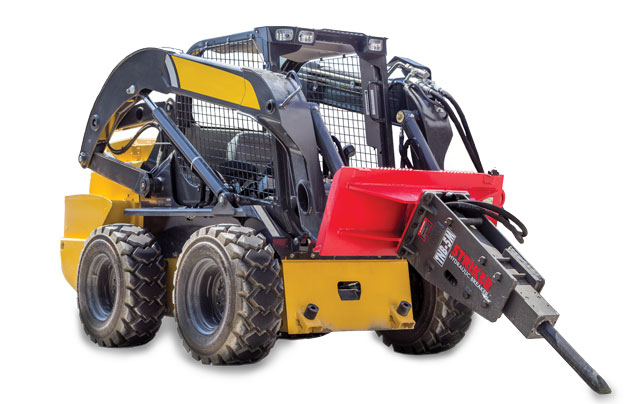 Breakers are not as popular on skid steers as they are on excavators, but the demand is still high. One reason for this is the environments skid steers and loaders can access. Skid steers work in tighter spaces and are more versatile.

“It seems that the smaller track loaders are increasing in the marketplace as well as the remote control robots. All are used for demolition inside buildings as well as taking buildings down one floor at a time,” says Rich Elliott, manager of hydraulic attachments for Epiroc, which is part of the Atlas Copco Group. David Nakamura, president of Toku America agrees that more demolition jobs today are going with hammers mounted on a skid vs. manual jack hammers.

Industries such as paving and concrete are more likely to have a skid steer on the job instead of a mini excavator. “Although the skid steer may not have quite the working range of a mini excavator with a breaker, the skid steer may be more suited to the other demands of these industries because the breaker can be on and off in seconds to allow for the use of other attachments,” says Chuck Kennedy with Blue Diamond.

Breakers on the market today also have features that allow them to adapt and complement the applications in which skid steers and loaders operate, such as water ports for dust suppression.

2. Think Application Above All Else

As usual, sizing a breaker to fit your specific machine is important to get right given the stress a breaker inflicts on itself and the machine, but the intended application is a part of this sizing equation as well. Elliott says there can be three to four different breaker sizes that can be adequately mounted to any size carrier, which can get confusing if you aren’t clear on the breaker’s role.

Kennedy recommends starting with auxiliary hydraulic flow requirements, which will usually narrow the range to one or two models. From there, take the size of the machine and type of work into consideration — the heavier the use, the heavier model you will likely need. Just be right.

“The biggest decision is to make sure that you are not putting too heavy or too light of a breaker on any sized carrier,” Elliott says. “In some applications it can be found that a smaller breaker is more productive than a larger one.”

Keep versatility in mind, too. Toku-Striker offers seven models that can be mounted to skid steers or track loaders, but one in particular can be mounted to both a skid steer and mini excavator unit by removing only two pins and assembling a pin and bushing kit to the mini ex unit.

Every hydraulic attachment has a specified hydraulic flow and required pressure that it should operate within, so be sure that the auxiliary circuit has the proper settings for breaker operation — and remember that a breaker is not going to need high flow. “If these are not set properly the breaker will not perform properly and the maintenance intervals will also be drastically increased,” Elliott says.

4. Get a Regular Maintenance and Operations Plan Ready

All your meticulous planning to purchase the perfectly sized breaker for the right machine will be a total waste if you don’t sketch out and stick to the maintenance plan, which, with breakers, goes hand in hand with their operation. Elliott says breakers need to be greased with a high moly-based lubricant (think Chisel Paste) at least once every one to two hours of operation, and Nakamura says to make sure the tool is pressed in before grease is applied. This will prolong the life of the wear bushing and the working tool.

As always, pre-use inspection is a must. Check all the bolts and make sure the tool, bushing and retainer pins are within the proper wear specifications. Kennedy says the lower bushing always sees the most abrasion and wear and will be the most critical area to keep greased.
“Although different brands and sizes of breakers may have different maintenance and grease points, the lower bushing area is the most critical on all breakers,” he says.

The good news is there are breaker features out there that will make all of this maintenance easier. Toku’s hammers have only two moving parts, for example, and are accumulator free, which makes maintenance simple and convenient. Epiroc makes it easy for automatic lubricators to be mounted to the breaker for hassle-free lubrication; it also has dust seals on the lower bushing to decrease wear on the tool and bushing. Blue Diamond has addressed the need to recharge the gas after service by making its gas chamber an integral unit that can be removed as an assembly without the need to discharge and recharge the system.

In terms of straight operation, first ensure that the machine is in the proper mode (if equipped) prior to operating the breaker. Kennedy says the single biggest misuse of a breaker is prying, either intentionally or unintentionally. “The breaker must have constant down pressure to keep functioning but the down pressure must be directly in line with the tool/bit,” he says. “Any pressure that causes a prying action or side pressure on the tool is going to cause premature lower bushing wear and/or tool breakage.

5. Understand the Role of Nitrogen

For hydraulic units, the majority of the impact force comes from the hydraulic flow and pressure with accumulator assistance. In the case of a nitrogen design, the majority of the power comes from the nitrogen charge. All breakers have some type of a nitrogen charge that assists in the breakers performance — some retain the nitrogen charge with the seals that contact the piston and some are trapped in an accumulator and separated by a diaphragm. Here’s how Elliott explains the differences.

A lot of breaker innovation these days sits at the intersection of removing points of failure while adding new levels of protection to enhance the life time value and performance of the breaker and the carrier.

Blue Diamond has removed the need for tie rods on its cylinder housing by using a mono block design. This has drastically reduced expensive failures by eliminating the eventual stretching and breaking of tie rods. The SB breakers from Epiroc no longer have tension bolts, which enables easier troubleshooting and decreases the routine maintenance and repair time. Instead, these breakers feature an overload protection system to prevent the breaker from being overpowered if the oil flow from the carrier’s auxiliary circuit is higher than the maximum amount.

Given the ample market and improved designs, the right breaker for your skid steer or loader job is out there. It’s just up to you and your dealer to find it.

Chris Crowell is a contributing editor for Compact Equipment.