The Dual History of the Backhoe Loader

The history of the backhoe loader goes back 50-plus years. On separate sides of the pond, both Case and JCB began tinkering with ideas of a dig-and-load combo machine for the construction industry. With buckets on both ends, the backhoe loader became famous for specializing in the two essentials of construction — digging and loading. We celebrate this machine’s famous history with two brand tales below.

The Story Behind JCB Backhoe Loaders

In 1945, Joseph Cyril Bamford started his own business in a rented garage in Uttoxeter, Staffordshire, England. First creating two-wheel trailers, Bamford went on to build four-wheel trailers. Then, he added hydraulics to create the first, revolutionary four-wheel steel tipping trailer. In 1948, Bamford introduced what proves to be the most important of all early JCB models — the Major Loader, a front loader designed to bolt onto a Fordson “Major” tractor.

In the early 1950s, JCB introduced a smaller version of the Major Loader — the Master Loader. That innovation is followed by a new half-track conversion for Fordson tractors. It’s on a half-track sales trip to Norway that Joe Bamford found the inspiration to develop the machine for which JCB has become world-famous: the backhoe loader.

In 1953, Joe Bamford developed the world’s first backhoe loader by adding a backhoe onto the back of a Major Loader — essentially a Fordson tractor with a hydraulic excavator at the rear, a Major Loader at the front and an optional cab. Machine development continued with the launch of the Hydra-Digga in 1957, the first JCB machine to provide a comfortable cab.

JCB continued to refine the backhoe loader, creating the JCB 3 backhoe loader, a smaller side-shift unit that could dig right up against a wall. It’s also during that time that the seeds were sewn for JCB’s famous backhoe performance group — the Dancing Diggers — when the JCB 4 performs an “up-and-under” routine over the company Cadillac. In 1964, JCB shipped the first backhoe loader to the United States — the 4C.

Chris Giorgianni is the vice president of products at JCB North America, based in Savannah, Ga.

The Case for Factory-Integrated Loader Backhoes 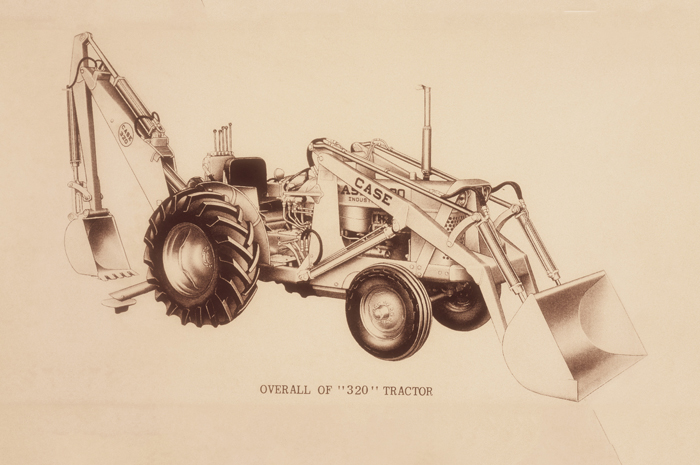 Before the introduction of the gasoline-powered Case Model 320 industrial rubber-tired backhoe loader, contractors used to retrofit a farm tractor with a loader attachment or backhoe. However, the challenges associated with assembly, combined with the lack of factory warranties that covered the unit as a whole, dictated a better solution.

Recognizing the industry need, a team of Case engineers — led by visionary Elton B. Long — developed the first tractor loader backhoe integrated from the factory and warranted by a single OEM. The machine was specifically designed to tackle diverse loading, digging and carrying requirements. Additionally, it was engineered and manufactured to withstand the rigors of construction projects, as well as agricultural applications. The Case Model 320 was unlike any other in its ease of maneuverability and ability to speed the completion of small jobs, some of which were previously done by hand. Its rubber tires allowed it to quickly move materials. Pallet forks, crane booms and other attachments further extended the machine’s versatility. 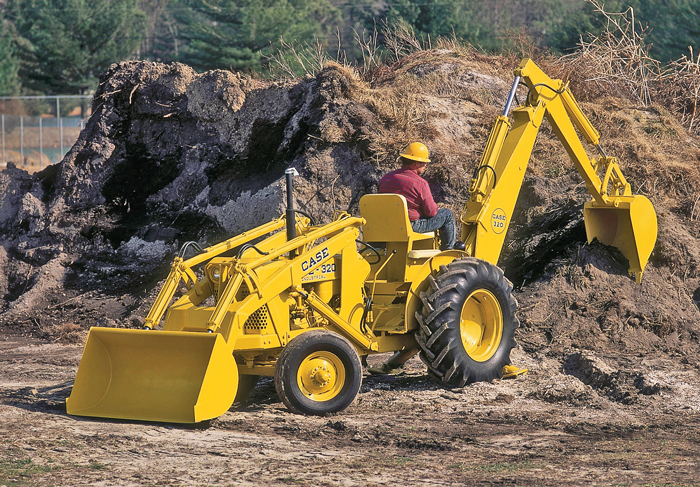 As the Case Model 320 rapidly grew in popularity, Case soon offered a full line of backhoe buckets up to 38 in. and self-leveling loader buckets. By 1959, Case engineers improved on the original with the introduction of the Case Model 402, the industry’s first diesel-powered loader backhoe. Case loader backhoes also incorporated many other industry firsts over the years — from Hydraulic Extendahoe extendable dipper sticks (that added 2.5 ft to the backhoe’s digging depth) to return-to-dig and return-to-travel functionalities.

Katie Pullen is the brand marketing manager for Case Construction Equipment, based in Racine, Wis.