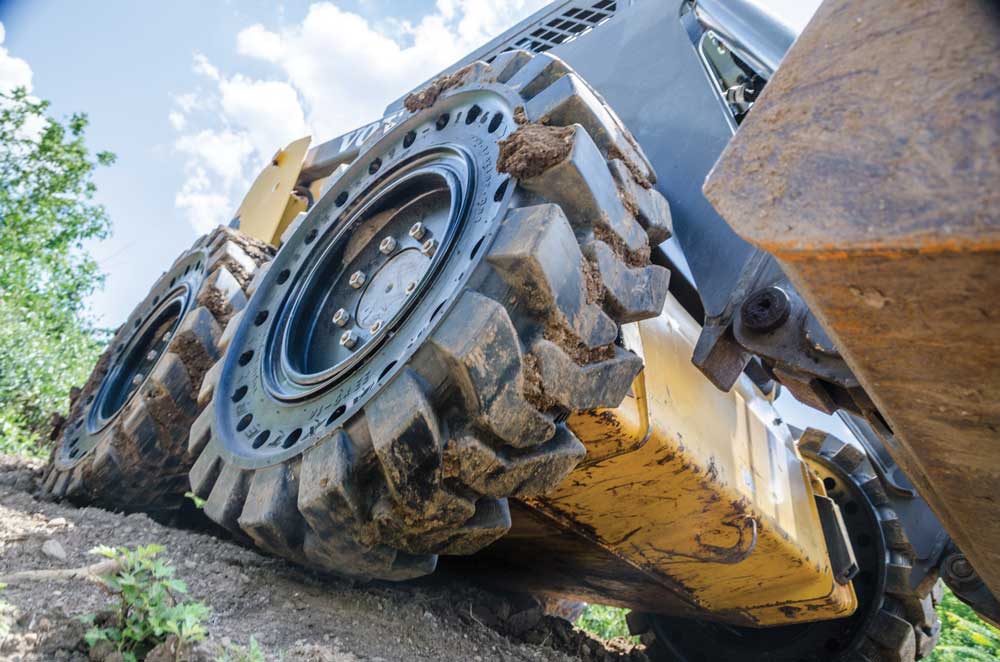 Kicking tires may have worked for shoppers in the past, but not in today’s skid steer tire market. SSL tires are liable to kick back. They are compound-tough, engineered to either float or bite and as apt to be solid as air-filled. More to the point, anyone shopping for a skid steer tire should kick themselves if he or she doesn’t know exactly how to outfit their loader with tires.

After all, the real starting place for a skid steer tire buyer is not in the showroom. It’s back at the worksite. Scott Sloan, ag product manager for Titan Tire, says valuing a tire “depends on what a buyer plans to do with it. We have turf options, asphalt options, snow options and standard options. An owner has to qualify what he is planning to do with the tire the majority of the time so we can make a decision that optimizes his purchase.”

The other basic shopping consideration is price, which can range from $60 per skid steer tire to more than $600. “There are guys who have farms and get on a skid steer once every couple of weeks,” Sloan says. “Then there are the guys who use it every day. Two different markets. We’re in the higher end with premium skid steer tires offering performance and durability. There are a lot of skid steer tires that look very similar, but when it comes down to wear, they don’t meet the standard we have.” An example of the durable Titan line is the Ultimate, a mid-range priced pneumatic tire you can see to the right with unusually deep treads and sturdy sidewalls.

Not that the price tag of a skid steer tire tells the whole story. Justin Brock, Michelin marketing manager for construction products in North America, advocates a longer view. “When I think of cost, I think of the total cost of ownership. This is very different than the initial price of a tire. One needs to understand the application and what solution works best for that application.”

Ryan Lopes of Alliance Tire Americas agrees. His buying formula is to “divide the acquisition cost by the number of hours or months of service you will get from the tire. That is the true return on your investment.”

A hierarchy of tire cost for skid steers does exist and sometimes relates to manufacturing techniques — think bias vs. radial, for example. Lopes, who is ATG’s national product manager for material handling and solid tires, says some buyers look at weight as a key criterion for evaluating tires, though it’s rarely an apples-to-apples comparison. “Solids are heavier and tend to cost more than pneumatics,” he notes. “But the materials, the engineering and the methods of construction can result in significant differences in quality and durability as well as weight.” 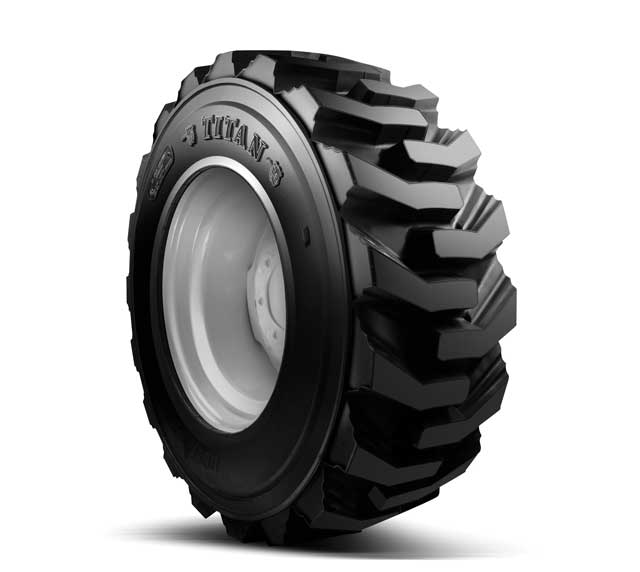 Most tires for skid steer loaders are pneumatic, and Sloan says 98 percent of them are sizes 10-16.5 and 12-16.5. A third popular size is 14-17.5. Though radials are the preferred choice on larger pieces of construction equipment, skid steer loaders mostly roll on bias tires.

“We only have one radial tire in the skid steer line,” says Eric Hartzler, wholesale manager for Midwest Equipment (MWE). “The issue being that radials on skid steers are harder to repair. Radials are more expensive. You begin to approach what you will pay for solid tires.” A best-selling bias product at Midwest Equipment is the Lifemaster, a versatile, air-filled tire with bidirectional tread that loves snow.

On the other hand, the rental market increasingly likes solid tires. The reason: fewer flats. “In a rental application,” Hartzler notes, “the rental agent can’t be constantly sending out techs to fix flats. Solid tires can be two to three times more money but will have four to five times longer life expectancy. And tread depths usually are far deeper than on pneumatic tires, so the wear characteristic is better. Really, with solid tires, you only really sacrifice ride quality.”

Foam-filled pneumatic tires are a compromise solution, but Lopes isn’t convinced there’s much advantage to them. “That’s a relatively expensive way to simulate a solid tire without getting all the benefits of truly solid construction. Punctures and slashes in the tread or sidewall can still lead to failure of the casing. That forces an owner to replace the tire and re-do the foam-filling. That can be very expensive.”

The rubber component of tires remains the critical one — whether it be synthetic or natural. Titan Tire’s Sloan says buyers should know the difference. “Synthetic rubber is better for skidding and running across a hard surface. Natural rubber is better for working on rock because it takes the impact better. Finding a balance in a tire between the two types of rubber is important because a skid steer isn’t usually operated only on pavement or on rock.”

However, rubber isn’t the only important component. “It is just one of dozens of ingredients in modern tires,” says Lopes, “which is why we refer to the elastic materials tires are made of as compounds. They contain both natural and synthetic rubber as well as silica, carbon black, elastomers and hardeners, all in very specific proportions. It is not likely we will see the end of rubber in tires, but I believe we will continue to see significant advances in compound science.” 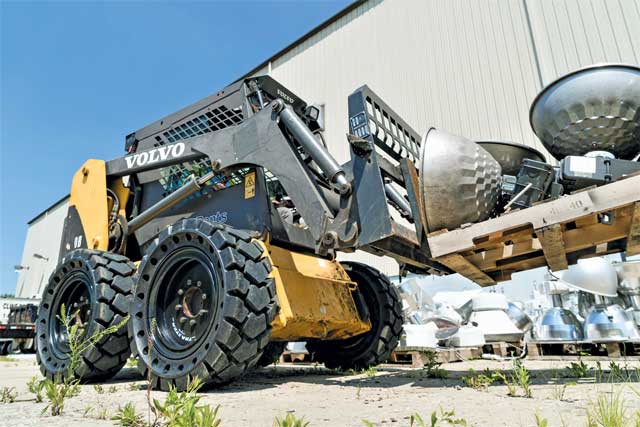 Flotation tires may be losing market share. Hartzler, for example, doesn’t “stock a lot of flotation at Midwest Equipment. That sort of changed with the introduction of tracks on compact equipment. Going to tracks is a much better option than flotation tires.” Tire dealers and manufacturer reps can remember when inventory for compact loaders was 80 percent tires. Now it’s closer to 70 percent tracks.

“There is a growing awareness of the value of choosing a skid steer tire on the basis of how the machine will be operated and jobsite conditions,” he says. “That’s leading the industry away from the old one-size-fits-all model and toward matching the tread and construction of a tire to the needs of a customer. As a result, the market is recognizing the differences between pneumatic, flotation, high-traction, solid and other types of skid steer tires.”

He considers the shift “a very positive development. Think of it: You can have a particular model of skid steer scooping up sand and gravel on a construction site, another one pushing manure in a feed lot and still another filling bins at a waste transfer facility. Those uses and demands on the tires are completely different from each other.”

On the other hand, skid steer tire models that function well under various conditions remain popular choices. Lopes cites the example of ATG’s Galaxy Beefy Baby III, which has universal appeal for buyers with its angled “beefy” tread that gives a smooth ride on hard surfaces yet self cleans in loose soil. “It’s a year-round favorite.”

Whatever the choice of tire, it will wear out eventually. To monitor wear, tire industry experts advise operators to check their tires at the start of each day, looking for gouges or cuts. Uneven wear on the tires — the front tires usually go first — warrants tire rotation. And they advise buyers to know if a certain tire has wear indicators built in. If it does, they say, keep an eye on it.

Twixt a Tire and a Wheel 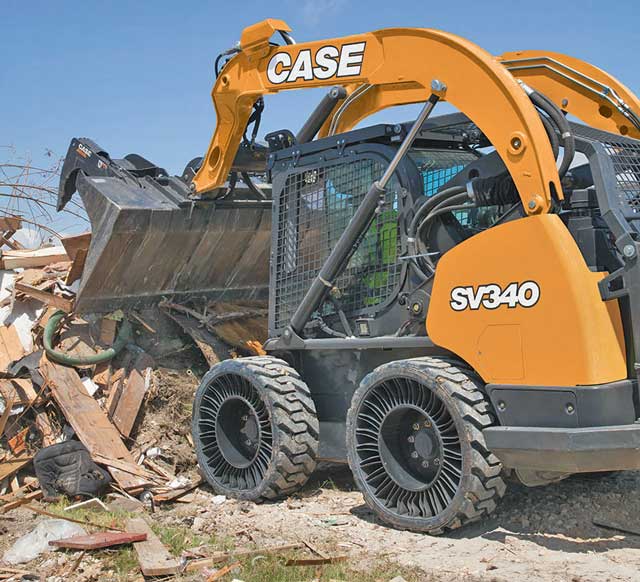 Michelin’s Tweel SSL is a hybrid that doesn’t fit neatly into any category but rides smoothly across all of them.

It is an “airless radial tire.” More precisely, it is neither a tire nor a wheel, but a combination of both with a rigid steel center that bolts to a hub and is connected to the ground-bearing tire surface by “flexible, deformable, high-strength poly resin spokes.” It was developed at a South Carolina Michelin facility and is manufactured there. Patented in 2003, it entered the skid steer market in 2012.

Michelin engineers say the spokes flex and transfer energy like an air-filled tire but, unlike a pneumatic tire, the Tweel doesn’t deflate. In sum, the Tweel is radial for strength, solid for severe applications and durably buoyant. The company claims better fuel economy for skid steers that roll on Tweels, more uniform ground pressure, greater tolerance for turf and an overall gentler ride for operators.

All of this innovation comes at a price, of course. A Tweel smooth, hard-surface skid model is around $700, while a hard-surface traction model or an all-terrain model can cost north of $1,000. The upfront cost looks better in context: If the functional life of a Tweel significantly exceeds that of traditional skid steer tires, spreading the extra cost across the additional work hours can produce comparable true value.

Though skid steer owners in North America have had the Tweel option for several years, it wasn’t offered in the United Kingdom till last year. That expansion of its market suggests the Tweel’s influence in the skid steer tire industry is growing.