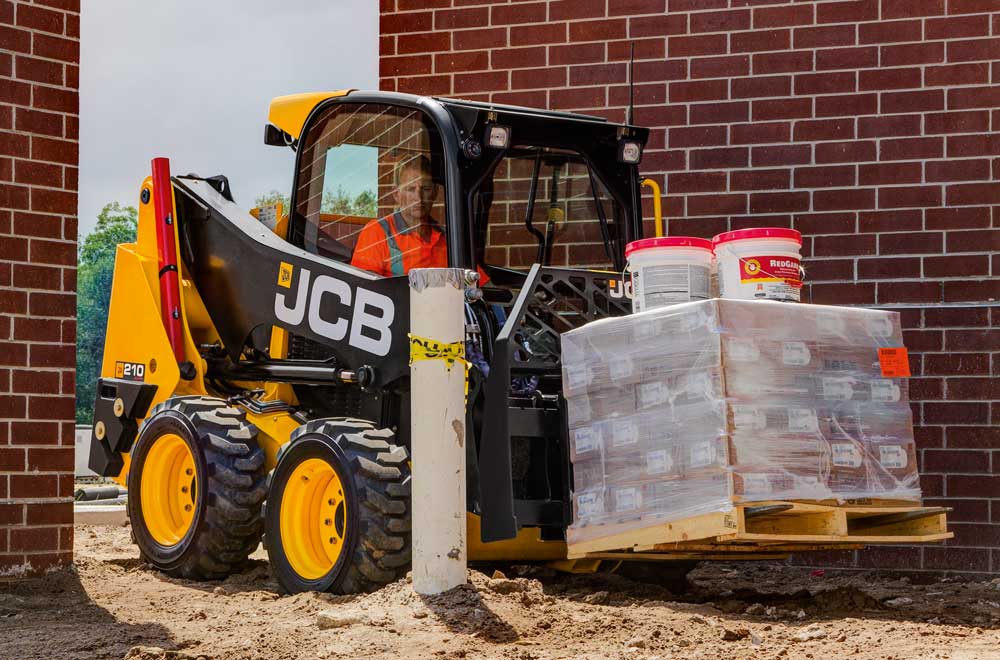 In 1993, JCB entered the skid steer market with the first mono-boom, side-entry skid steer, leveraging the company’s decades of experience as a manufacturer of telescopic handlers. Over the years, JCB’s skid steer line has evolved, going from the Series I and Series II machines to its New Generation models. In 2017, the company launched the 3TS-8W Teleskid, the world’s first skid steer with a telescopic boom offering greater lift, reach and dig depth than any skid steer on the market. The company’s skid

Today, JCB’s skid steers are designed for the active North American market and global applications. The company offers three large platform machines in North America — the 270, 300 and 3TS-8W — and one small platform model — the 215. JCB’s skid steers feature the company’s iconic single-arm JCB Powerboom for enhanced operator safety. JCB’s side-door entry means that operators are not required to climb over a cumbersome attachment or under an unsupported boom to enter or exit the cab, as they do with conventional skid steer loaders. The unique boom configuration also allows 60 percent better visibility than competing skid steer loaders, says JCB. The National Institute of Occupational Safety and Health (NIOSH) has recognized the many benefits of the JCB boom and side-entry design by rewriting safety alerts to exclude side-entry skid steers, says the company.

All JCB skid steers meet Tier 4 Final regulations and are powered either by JCB’s Tier 4 Final JCB Ecomax engine or JCB Diesel by Kohler engines. JCB skid steers do not require exhaust aftertreatment, allowing greater fuel efficiency and reduced downtime and operating costs. JCB’s myCHOICE software provides operators with the ability to adjust the travel and loader controls of their skid steer loader for optimal operation to suit a range of activities, from precision applications to faster cycle operations.

The JCB Teleskid is a revolutionary product that can reach 60 percent further forward than any other skid steer on the market — an industry first. It is also the only skid steer in the world that can dig below its chassis to an unparalleled depth of around 1 meter. In addition, this innovative new machine can reach 8 percent higher than any other skid steer, says the company. Also, the JCB Teleskid is the only skid steer on the market which is able to combine vertical- and radial-lift capability. A unique bucket-positioning leveling system allows the bucket level to be set and maintained throughout the boom’s range of movement.

“Consider serviceability when buying a skid steer. The ability to quickly conduct daily checks will minimize the likelihood of unscheduled downtime,” says Chris Trampush, product manager for skid steer loaders at JCB North America. “For example, all the filters in a skid steer should be easily accessed from the rear of the machine. You should just be able to tilt the cab forward while the boom is in the down position for quick access to major components.”
[prettyPhoto title=”JCB Specs *Dependent on addition of suitcase weights.” link=”https://compactequip.com/wp-content/uploads/2019/07/jcb-skid-steer-specs.jpg” type=”link” ]