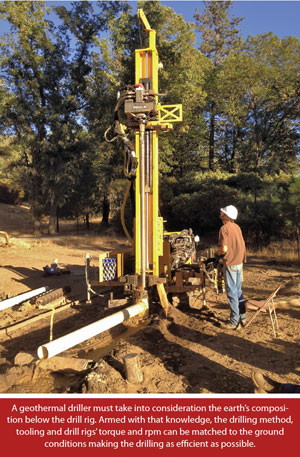 Editor’s Note: No two geothermal loop systems are the same, which is why constant education is a requirement for geothermal drillers. In this new department, we will explore the variety of loop systems, installation methods, drilling approaches and unique product offerings in the residential geothermal heat pump market. Take it away, Brandon.

A carpenter drills into wood. A machinist drills into metal. A geothermal driller dills into the earth. Buried just below the surface is often a variety of geology. How can these different materials be drilled through efficiently?

“If you try and drill into a brick wall using a hand drill and a wood drilling bit,” explains Elliott Duck, sales manager at RigKits LLC (a leading manufacturer of geothermal drilling equipment), “you would be there all day, would burn out the bit and not get anywhere. A masonry bit, however, cuts through the brick no problem. Coupled with a hammer drill — even better. The same basic principles apply when drilling into the ground for geothermal applications.”

A geothermal driller must take into consideration the earth’s composition below the drill rig. Armed with that knowledge, the drilling method, tooling and drill rigs’ torque
and rpm can be matched to the ground conditions making the drilling as efficient as possible. As discussed in parts two and three of this series (read them online at www.ceunbound.com), mud drilling and DTH hammers (down-the-hole hammers), also known as air drilling, both have their advantages and limitations. Mud drilling is efficient in soft formations such as sand and clay. With the right bit selection, tougher gravel and slightly more consolidated materials can also be drilled with this method. However, the fastest way to drill into rock formations is with a DTH hammer, resulting in straighter, cleaner holes compared with mud rotary.

Therefore, making the decision between mud and air is
quite obvious if you will be drilling in a part of the country
where the same ground conditions can be expected on every
drill site. However, in other parts of the country soil conditions
can change from drill site to drill site. Even a single
borehole may involve a diversity of material, both unconsolidated
and consolidated. Other variables include whether
or not water will be encountered down the hole. Will the
overburden require casing to be temporarily installed to
prevent the collapse of the borehole? In these varied conditions,
which drilling system is right for you: mud, air or
both? What about augers?

Selecting a drilling method is sometimes a process of compromising.
For example, if 80 percent of a 200-ft geothermal
borehole consists of unconsolidated formations such
as clay and sand and only 20 percent is consolidated rock,
mud drilling, while slow through the rock, would be efficient
through 80 percent of the bore hole and therefore the
most likely method of choice. Conversely, if 20 percent is
unconsolidated overburden and 80 percent rock, augers can
be used to drill efficiently through the overburden with temporary
PVC casing being inserted if necessary (explained in
detail in part one of this series).

A geothermal driller must take into consideration the earth’s composition
below the drill rig. Armed with that knowledge, the drilling method,
tooling and drill rigs’ torque and rpm can be matched to the ground
conditions making the drilling as efficient as possible. 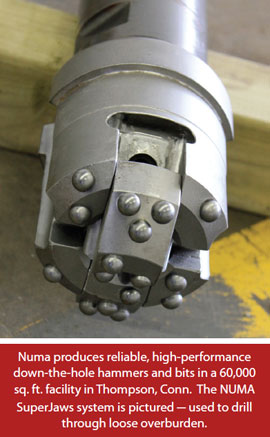 The augers can be quickly removed and a DTH hammer will efficiently complete
the remainder of the bore hole. It should be noted that the above scenario has been
simplified for example purposes. There are many other variables to consider when
choosing the most efficient drilling methods for your particular borehole.

Compromising, however, is not an efficient option if near equal percentages
of consolidated and unconsolidated materials will be encountered. The good
news is that you don’t have to compromise. Various drill rigs utilize both mud
and air drilling systems. For example, many rotation heads offer a balance of
torque and rpm to match your drilling method — mud drilling requiring higher
rotation speed compared with DTH hammer drilling, and auger drilling requiring
as much torque as possible. Also, universal drill rods are available allowing
both mud and air to be used as the circulating fluid to flush out the drill cuttings.
Portable air compressors and mud pumps can be purchased or rented and easily
coupled to the drill rig, providing the necessary air or water flow and pressure.
And changing between a DTH hammer and mud drilling bit is as simple and
quick as it gets. You may be thinking that sounds like a lot of support equipment
and tooling to have on hand, but when you consider the efficiency and versatility
it affords, the choice is clear.

Numerous geothermal projects are at your fingertips. Matching the drilling
method, tooling and drill rigs’ power specs to your ground conditions brings
them well within reach.

Brandon Wronski is an equipment specialist with RigKits LLC, based in Charlotte, N.C.