Nothing ruins a utility contractor’s day quite like hitting an undetected buried line. Delays follow. Costs multiply. Sometimes the unthinkable occurs and a worker is seriously injured. Knowing what is “down there” is a tremendous advantage for anyone beginning a utility excavation job.

Avoiding costly and interrupting mishaps is precisely why utility locator devices exist. They are a preventive medicine. The tool of choice varies from project to project, but in each case, a tool’s readouts give contractors healthy assurances of safe digging in congested subterranean areas.

The standard tool is a handheld wand or receiver that reads electromagnetic (EM) radiation. It works well in locating power, phone and cable lines, as well as metal piping. The search either is passive — with the receiver reading transmitted radio waves reflected back from a buried line — or active, with a transmitter sending a signal through a line or pipe for a wand to detect.

Another tracking tool — a radio sonde — paired with a locator can trace nonmetallic open-flow laterals, such as PVC water lines or concrete or clay sewage lines. The sonde is moved through a line and a handheld receiver at ground level follows its progress.

Ground-penetrating radar (GPR) is a whole different technology for finding buried utilities. Because it doesn’t rely on EM technology, a GPR unit can locate PVC and concrete lines, too. On the other hand, a radar locator is a more expensive tool than an EM unit and doesn’t easily penetrate soils with heavy clay content.

So utility contractors have choices, beginning with whether to invest in a locator tool or in a professional utility locator’s services. An increasing number of contractors are opting to do it themselves.

“They see a locator being operated by a professional and say, ‘Hey, what is that? I might need one of those,’” says Matt Lumbers, locator product manager for Subsite Electronics. “A contractor needs such a tool on hand to clarify and identify what is in the ground.”

In 2005, the FCC approved 811 as a national call-before-you-dig telephone number, creating additional motivation to scan before excavating. Contractors shop for a locator by comparing features. Multiple frequencies are a common feature, with the range of frequencies varying and customizable. For example, the Ridgid SR20 receiver, which is the base unit for the brand, offers all active line tracer frequencies under 35kHz, while the more powerful Ridgid SR60 offers the full range of frequencies from 10Hz to 490kHz. Each model offers 30 settable frequency choices to help isolate a specific pipe or line.

The Subsite UtiliGuard receiver offers its Ambient Interference Measurement (AIM) system to help the user identify a frequency amid electromagnetic “background noise.” AIM scans, then recommends a best frequency. “Interference in the area of a search is the biggest challenge for a contractor who is not using a locator every day. The AIM system gives them a guide,” says Lumbers. Subsite Electronics is an affiliate of Ditch Witch and, thus, is familiar with the needs of small contractors.

The popular McLaughlin Verifier G2 locator — and the companion GX model — offer standard receiver features but in notably rugged packages. “The durability of the McLaughlin locators comes from mounting the antennas and boards to protect the hardware,” says Matt Manning, products manager at McLaughlin. “These contain PC boards, like a laptop or a cellphone, but are used in the sometimes harsh environment of the construction industry.”

Eric Huber, locator product mkanager for Ridgid, echoes the viewpoint. “Locators are sensitive instruments. It is not equipment that can be tossed into a tool box and forgotten about.” Unfortunately, weighing just 4 to 5 lbs apiece, the units are toss-able, which may contribute to their mishandling.

McLaughlin backs up its durability claim with a three-year warranty against failure, including water damage. “When we began to offer that in 2005,” Manning says, “it was really stepping out of bounds. A one-year warranty was standard in the industry at the time and remains that way for most manufacturers.”

Over at Subsite, the UtiliGuard boasts an IP65 dust-water international protection rating, among the tops in the industry. The reachable depth of the locators varies according to soil conditions and signal strength. Typically, they reach down 15 to 30 ft, which generally is sufficient, since that is several times deeper than most buried pipes and lines.

Ridgid’s SR20 offers a multi-directional antenna, which Huber says frees up operators in their searching. “Instead of having to approach from a certain direction, an operator can approach from any direction. With some locators, if you don’t approach head-on, you may miss the line you seek.” 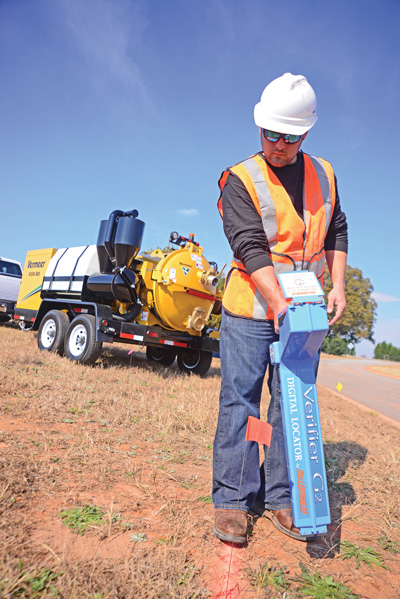 The reachable depth of utility locators varies according to soil conditions and signal strength. Typically, they reach down 15 to 30 ft, which generally is sufficient, since that is several times deeper than most buried pipes and lines.

The usual use pattern for a professional locator is, first, to directly connect a transmitter to an exposed segment of line or pipe and send a low-power, low-frequency signal. If that is not possible, the operator will clamp onto the line and send a higher-power, higher-frequency signal. The lower frequency is preferred because it produces less EM clutter for the handheld receiver.

A contractor, on the other hand, might first perform a more cursory passive examination, with the transmitter resting on the ground and sending downward a high-power, high-frequency signal. Then, while an excavator is being set up to dig, the contractor might transmit a clamp-on signal through the line to double-check a location.

Either way, the separate transmitter is a necessary part of the locator system. Battery life varies among transmitters and receivers. Some receivers, for instance, will perform for 16 hours on a set of batteries, some nearly twice that long. A user tip from manufacturers: Remove batteries when not using. Leaking battery acid really fouls up the works.

Ground-penetrating radar locators are visibly different tools. They can weigh up to 75 lbs and are pushed along on four wheels like a lawn mower. They do not rely on separate transmitters to induce an electromagnetic signal.

Rather, a GPR locator sends high-frequency radio signals directly into the ground and times their return, with the lapse establishing an object’s depth and location. They can peer into and under concrete and discern any buried object, not just metallic ones. In an increasingly PVC world, such indiscriminate detection is significant.

The Mala Geoscience Easy Locator HDR is a second-generation GPR and offers 25 percent greater depth and better resolution than an earlier model. “Sales of the units are growing,” says Philip Oviatt, senior account manager for Mala Geoscience USA. Such sales are despite a GPR’s relatively high cost. The average market price for a GPR unit is in the $13,000 to $18,000 range.

Subsite Electronics also offers GPR locators — the 2450GR and the new 2550GR — but EM units remain the more popular choice. “The GPR locators are more technical and, in our experience, relatively few contractors have them unless they are in the oil business.”

Most locators incorporate Bluetooth and GPS technologies so that operators can electronically map and retain utility paths. Huber says such mapping is a definite upgrade from traditional methods. “Paint doesn’t last on the ground and flags get pulled out, but a digital map can be used months later.”

Manning encourages conscientious locator-buying companies and contractors to invest in employee training just as they invest in equipment. “A locator is a relatively simple tool to use,” he says, “but you need to know the theory of utility location to get accurate locates.”

“It can be more art than science when multiple underground utilities are in close proximity,” says Huber, notwithstanding the scientific principals involved. Easy-to-read display screens still require locator operators with the training to make sense of it all.