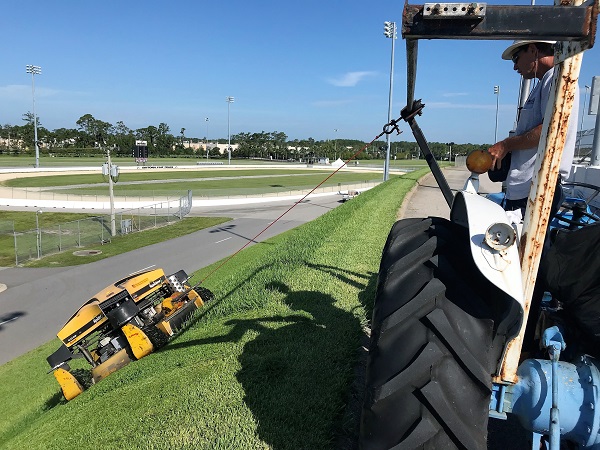 Daytona International Speedway, the home of the Daytona 500, the most prestigious race in NASCAR, is using a Spider ILD02 remote-controlled slope mower on the steep sided banks of the world-renowned motor racing circuit in Florida.

The Spider mower, built by the Dvorak company in the Czech Republic and distributed by Orlando-based Slope Care LLC, is just one of the tools the Speedway has employed over the years to keep the grass in place and growing on the steep surface outside the turns at Daytona. The high banks are one of the bigger challenges for the grounds maintenance team that spends all year keeping the Speedway turf groomed and green. Other issues include drought, pestilence and water restrictions that govern how much water they can use to keep the grass looking good. 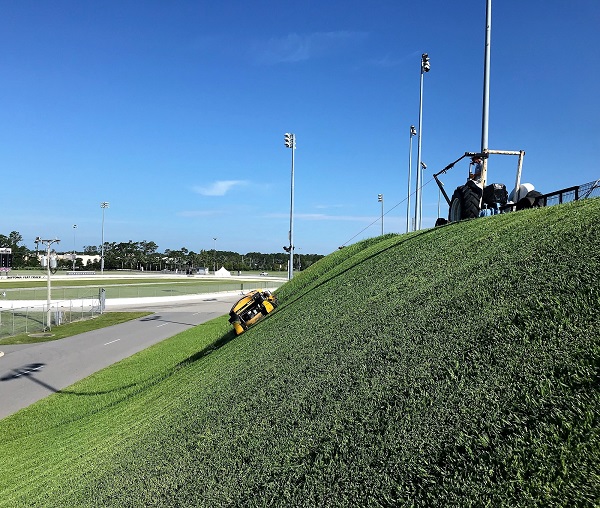 “The Spider ILD02 has an integrated winch which allows it to be operated on banks up to 60 degrees and ground anchor,” said Jason Griffith, head of facility grounds team. “One of my team, Emory Renfroe, manufactured a special frame attachment for a tractor, which acts as a mobile ground anchor, allowing the machine to track across the slopes with the operator manueuvering it with his remote-control unit.

“With four mulching blades, the mower definitely makes the task easier on the high banks and the grass is a lot healthier than before. To keep the grass looking fresh we mow the grass in three different directions; a new one every third time it is mowed, never the same direction twice. It makes it look better and kind of puts things in perspective. It takes four days for us to mow the entire surface.” 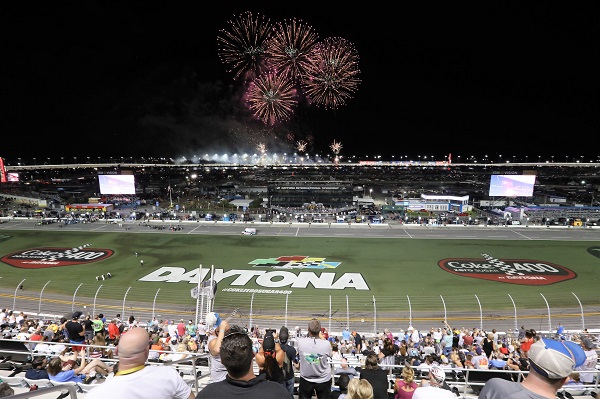 Andrew Gurtis, senior vice president of operations stated, “The old Spider mower has performed admirably in the past 8 years, but we’ve worked it hard and it has over 3,200 hours on the clock. It certainly needed replacing.”

Stephen Tews is the sales manager at Slope Care in Orlando and was part of the team responsible for the negotiations that has resulted in a new Spider ILD 02 being delivered recently.

“We recognize what an iconic brand Daytona is, not only to NASCAR, but also to world motor racing in general, and we felt it would be a great marketing tool if we could establish an association with the Speedway. We entered into negotiations with the Daytona management team, which resulted in us having 14 minutes of exposure on the digital screens around the stadium at the recent Coke Zero Sugar 400 weekend in July,” he said. “We featured our Mow-na Lisa video, which shows a Spider mower cutting a giant portrait of Leonardo da Vinci’s famous painting onto a hillside in the Czech Republic. The entire weekend was a great success.”