Micro Machines: We Track Down the Smallest Mini Excavators on the Market 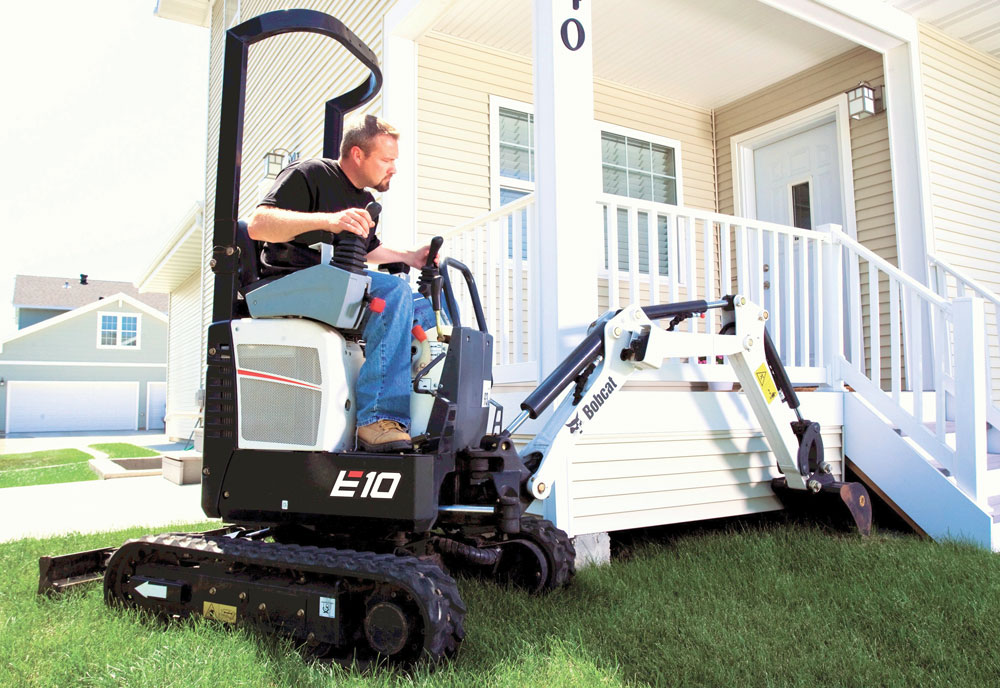 The smallest hydraulic excavators (with seats for operators) indeed are small. They are narrow and short enough to be driven through doorways. They’re powered by engines of 10 to 15 hp and weigh just a ton, more or less. By every definition, these are compact machines. While their market share is compact, too, it is growing larger.

“We don’t work the same way we did in the past,” says Greg Worley, Caterpillar product application specialist. “More and more customers want a machine to meet their requirements in the smallest package possible. They want more machine labor than hand labor. The opportunity for small machines continues to grow.”

Cat’s response to this market demand is the 300.9D, a compact excavator weighing slightly more than a ton with a three-cylinder diesel engine producing 13 hp. Twin hydraulic pumps can output 6 gpm at just under 2,500 psi. Like most of its competitors, it creeps along at 1 to 2 mph. All these excavators ride on retractable undercarriages that let them squeeze through narrow openings. With its tracks pulled in under the cab, the 300.9D, for example, is only 28 in. wide. That’s narrow. Sumo wrestling operators certainly won’t fit. On the other hand, with its treads extended outward, the 300.9D is a roomy 32 in.

For this small of an excavator, the machine’s ability to reduce its side-to-side profile is an essential characteristic. “The retractable undercarriage, I would say, is a critical feature,” says Tom Connor, Bobcat excavator product specialist. “The narrow width is essential to get through doorways, but we at Bobcat are insistent that the only time the undercarriage should be retracted is when you need to pass through a doorway. Our operator recommendation is that you operate the machine in the expanded mode.”

Yet manufacturers say these excavators are as stable as larger ones, pound for pound. “Proportionally, the stability of the unit is very similar to that of larger excavators,” says Eric Berkhimer, Yanmar USA product manager. In respect to the “tippability” of the company’s SV08-1B model, he says it is “really like anything else: Operators should not try to do too much.”

That is, the person at the excavator’s controls should not attempt to lift too much weight when the boom is extended to one side or another or operate on too steep a slope. The operator’s manual for the SV08 — which was introduced stateside in 2005 — advises that the machine not travel across a slope greater than 20 degrees nor be operated on a slope of any appreciable angle. 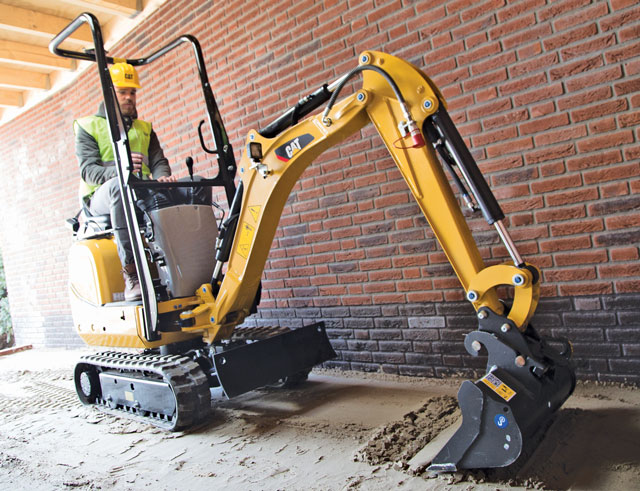 Cat’s response to this market demand is the 300.9D, a compact excavator weighing slightly more than a ton with a three-cylinder diesel engine producing 13 hp.

The SV08 is just 27 in. wide with its tracks retracted. Like its competitors, it is mostly a breaking and digging machine for confined spaces. While Yanmar offers small breakers for the SV08, mulchers generally require more hydraulic flow. The company has three sizes of buckets — 8, 12 and 16 in. “The buckets are not much bigger than a shovel, but the excavator works a whole lot faster,” says Berkhimer.

One of the selling points for the SV08-1B is its engine, a 10.3-hp Tier 4 diesel powerplant. “The engine is completely designed and built by us,” notes Berkhimer, “and Yanmar’s reputation was established on the reliability of its engines. This is critical to rental companies because they can rent out the excavator and not have to worry about it.”

Yanmar engines, in fact, are the choice of some other compact excavator manufacturers. Furthermore, the company is credited with building the first compact excavator, introducing it to the Japanese market in 1969. Yet for all this rich heritage, Yanmar does not yet offer the newest market option — a hybrid model.

“There’s not sufficient demand for hybrids,” says Berkhimer, adding wryly, “Plus, we make diesel engines.” While he acknowledges that hybrids are available and less-polluting for interior work, “so far I haven’t seen a lot of demand for them.”

Caterpillar does offer a hybrid, the HPU300, which is a combo version of its 300.9D diesel model. The hybrid’s three-phrase electric motor roughly produces the equivalent digging power of its diesel model (which, by the by, is a three-cylinder Yanmar). Cat introduced the hybrid in 2017 and, so far, sales of the unit are far less than the conventional 300.9D, according to Worley. He calls it “a niche opportunity but a growing one.” 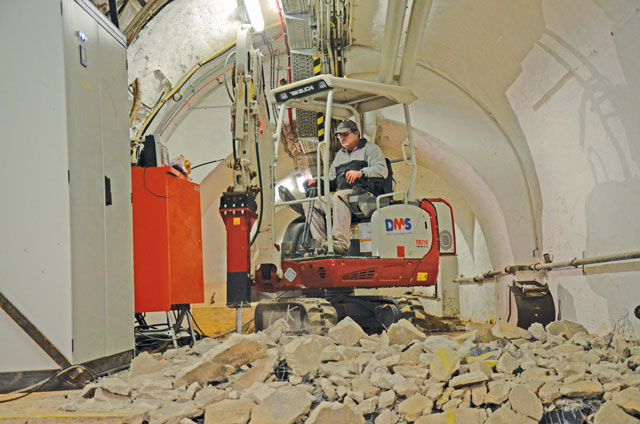 In 2017, Takeuchi introduced its hybrid model, the TB216H. Its retractable undercarriage narrows only to 39 in. Hence, this is a larger unit, though still compact.

In 2017, Takeuchi introduced its hybrid model, the TB216H. It weighs almost a ton more than the 210R and has a two-speed transmission that can trundle it along at a relatively quick 2.5 mph. Its auxiliary hydraulic flow is nearly 9 gpm at more than 3,000 psi. Its retractable undercarriage narrows only to 39 in. Hence, this is a larger, though still compact, machine that was never intended to pass through doorways.

In 2016, Bobcat rolled out a prototype of an electric compact excavator, but, as of December, the company had not introduced it to market. “We’ve been evaluating it,” says Connor. “We haven’t come to a conclusion about whether to produce a complete electrical unit or a hybrid. There’s a difference of opinion about what our customers want.”

Bobcat’s conventional compact excavator is the recently re-designated E10, which was introduced to the market in 2008 as model 418. Its 10-hp engine pumps 5.3 gpm through its hydraulic lines, enough for its boom bucket to dig 6 ft deep and lift about 525 lbs. “It’s not a toy,” Connor says. “A little excavator is a tool. As small as they are, they are powerful little machines.”

Although a Gehl hybrid excavator is potentially in the future, its newest entry in the compact excavator market is the conventionally powered M08. Rental customers and Gehl dealers asked the company to produce something smaller than the popular Gehl Z17 1.7-ton model and the M08 is the result. Its dimensions are comparable to its competitors — with an undercarriage that shrinks to a width of 27 in., a weight of 2,300 lbs and a hydraulic system with 2,360 lbs of breakout force. 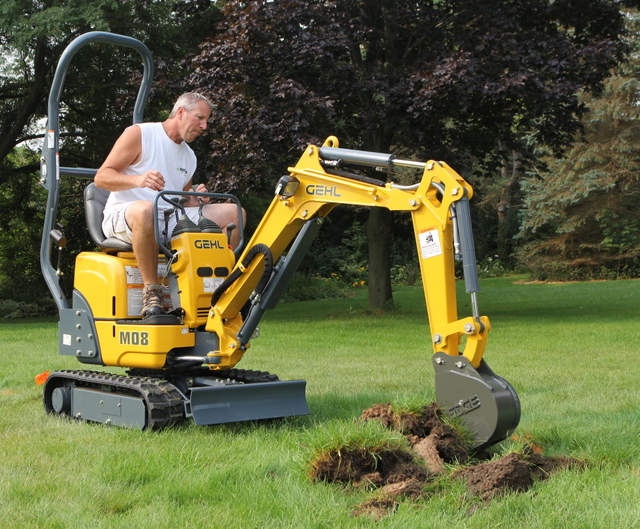 Rental customers and Gehl dealers asked the company to produce something smaller than the popular Gehl Z17 1.7-ton model and the M08 is the result.

Like its competitors, buckets are “far and away” the tool most often fitted to the working end of the M08 boom, according to Kelly Moore, who is Manitou Americas product and training specialist. The excavator is capable of digging almost 5 ft into the ground. As for hydraulically powered attachments, small augers are popular as well as hydraulic breakers in the 150 ft-lbs range.

Moore says buyers are attracted to the M08’s “push design boom,” which company engineers claim performs as much as 37 percent better than more conventional setups. Moore also extols a single-pin boom attachment system that he says is more durably engineered. “It gives truer alignment of boom and chassis and lasts years longer than a dual-pin design.” Note: Manitou Americas’ Mustang brand excavator, the 80M, is a twin of the M08. Gehl and all the rest of the manufacturers are riding a growing market. In the first nine months of 2017, an estimated 900 of the 1-metric-ton-and-smaller excavators and more than 3,200 of the 1- to 2-metric ton machines were sold. In two of the last three years, sales of small excavators have seen double-digit growth. That’s big. 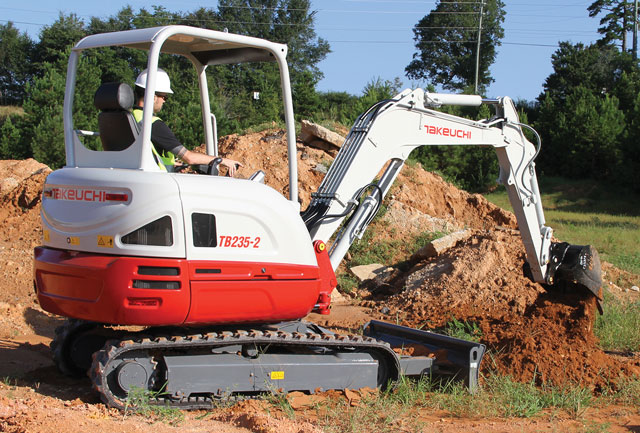 Takeuchi Fleet Management telematics system is standard equipment on the TB235-2 and provides free access for the first two years of ownership.

The sweet spot in the mini excavator market right now is the 3- to 4-metric ton segment. These size machines provide great reach, power and trailerable size while sticking to below 25-hp diesel engines (thus not using aftertreatment systems). Takeuchi-US recently launched the all-new TB235-2 compact hydraulic excavator. Sharing the same design concept of the TB230, TB240 and TB260, the TB235-2 provides Takeuchi with a 3.5-ton offering in this competitive market classification.

With an operating weight of 7,474 lbs, a dig depth of 10 ft, 7.7 in., maximum reach of 17 ft, 3 in. and breakout force of 9,127 lbs, the TB235 provides excellent working range and performance. Additionally, the TB235-2 shares the 24.4-hp Yanmar engine with the TB230 and requires no additional exhaust aftertreatment systems. The operator’s station is spacious and features an automotive styled interior with a multi-information display to keep the operator informed of machine health and condition. A cab option is available with air conditioning and heat that will provide year-round operator comfort in varying climates and conditions. For more info, visit takeuchi-us.com.