Downsizing in Deutschland: We Visit Hatz Engines in Germany to Detail Its New H-Series Compacts 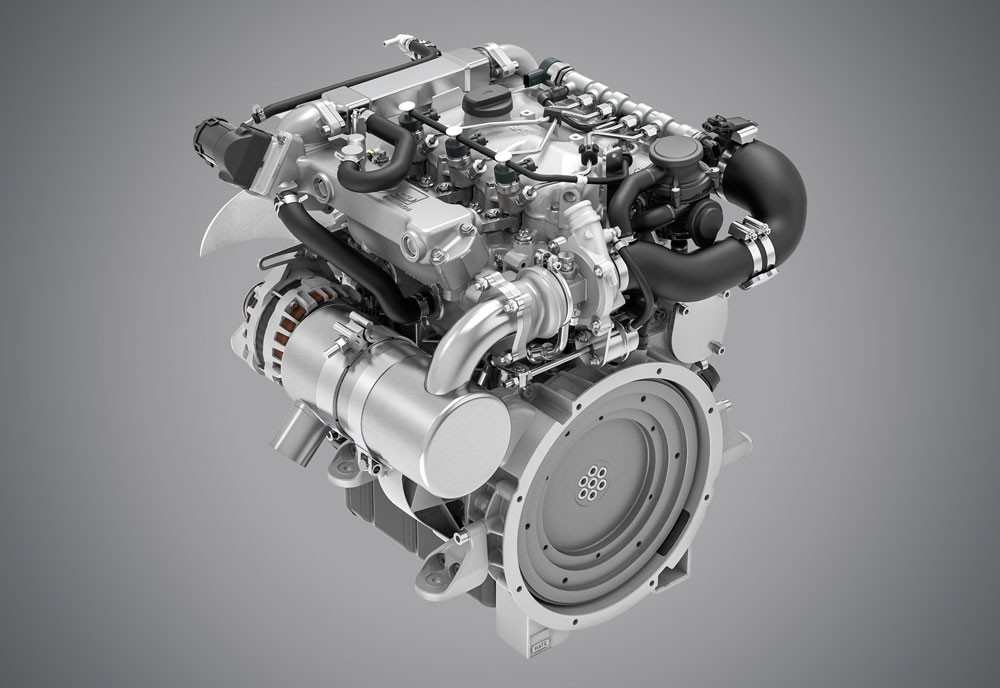 Deep in the heart of lower Bavaria, Hatz has been perfecting small engines for more than a century. Its hometown of Ruhstorf an der Rott in Germany is not unlike a small American Midwest town, surrounded by old bucolic villages and rolling farmland. It takes two and half hours to get to Ruhstorf from Munich. The border to upper Austria is only 10 kilometers away. The border to the Czech Republic only 75 kilometers. Yet from this small town, over the last 100 years, Hatz has been quietly challenging the off-highway diesel engine market.

Hatz developed its first combustion system with a flat seat injector way back in 1926. “We started in the heart of the engine to develop our core competency,” explained Bernhard Richter-Schützeneder, director of sales and marketing for Hatz, speaking at an international press event in June. In 1958, Hatz developed the first-ever aluminum engine. “Our focus was to reduce weight for mobile machines,” said Richter-Schützeneder, “which is an obvious benefit for small machines. Still, compactness and low weight are main features for all of our products.” 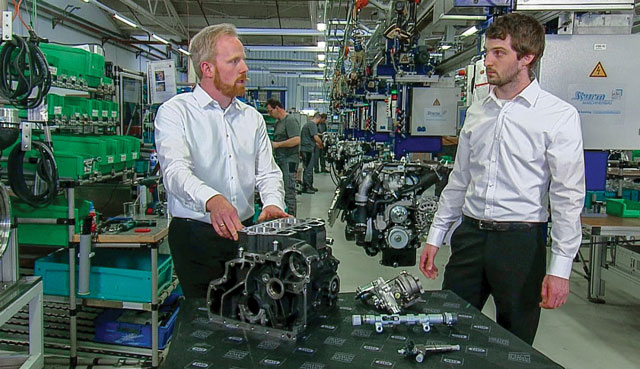 In 1976, Hatz developed its unique silent package, still available today, featuring insulation specially developed for reducing noise emissions by 60 percent in some cases (despite cooling fans). And now, in 2018, Hatz is marking another milestone. “Our new H-Series engines combine all of these components and technologies that we have developed over the years,” said Richter-Schützeneder “and it’s the first of our downsizing engines.”

Hatz invited Compact Equipment to its German home to debut its compact H-Series family of off-highway diesel engines and also to talk emissions strategy, its Hatz Smart Parts system and its increasing interest in the North American construction equipment marketplace. I toured its extensive factory in Ruhstorf, enjoyed some informative presentations, eked out a little operation time and even drank beer and schnapps with Wolfram Hatz, majority shareholder and chairman of the advisory board at Hatz (also, all-around nice guy). 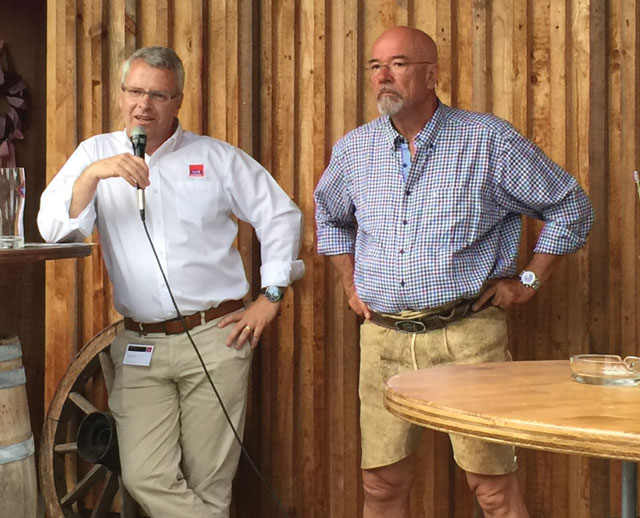 On this side of the pond, Hatz Diesel has been represented in North America since 1969. Today, Hatz Diesel of America Inc. operates sales, engineering, service and engine testing facilities in Waukesha, Wis. Leading these operations is Hatz American president and CEO Mike Hartoonian, and he’s looking for more machine makers to employ these H-Series beauties.

“The H-Series of engines brings Hatz to markets and applications that we just didn’t reach with our previous product offerings,” said Hartoonian. “We’re approving new applications every day really. We’ve always been big in the concrete and compact construction equipment businesses, but we are of course looking to expand the types of markets we serve.”

The H-Series boasts some impressive features to help sell these power plants — higher power output, efficiency and torque from a smaller engine capacity, along with lower weight, lower fuel consumption and lower emissions. Diesel engine manufacturers across the industry are all focusing on getting more power and cleaner power out of a smaller physical package, avoiding aftertreatment as much as possible. And while some of its engines might be getting smaller, the options at Hatz are not.

“The power and torque-to-weight ratio are big things we like to talk about but also flexibility,” explained Hartoonian. “The flexibility of installation into the application. Because of the size, because of the weight and because we offer different packages, we can offer different versions, different Tiers, different emissions levels and even enclosed power units. These are all based on the same platform, so we can deliver quickly to an OEM in the configuration that will meet their exact specification.” 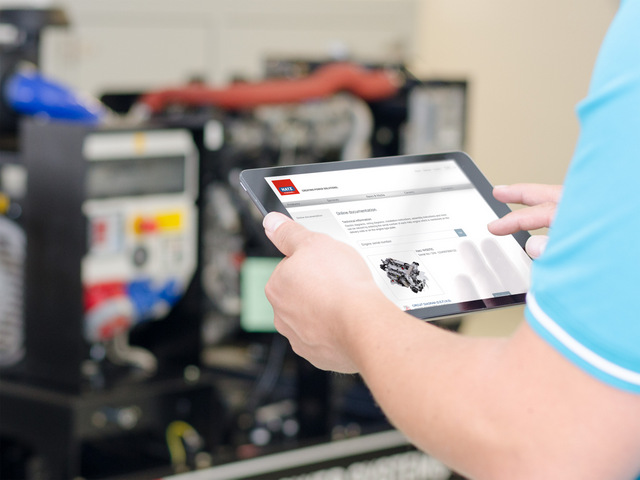 The latest arrival in the Hatz H-Series family is the three-cylinder 3H50TIC. This unit’s power range extends from 24 to 56 hp (18.4 to 42 kW). In comparison, the four-cylinder H-Series 4H50TIC engine, which started production in 2014, has a power range of 49 to 74 hp (37 to 55 kW). Both engines are also available in TI variants (one going up to 83 hp) as a less expensive version without exhaust gas recirculation and diesel oxidation catalytic converters for sales in countries with less stringent emissions regulations. For markets with new and stricter emissions regulations, such as EU Stage V in Europe (we’re only Tier 4 Final here in America), Hatz has designed the 3H50TICD and the 4H50TICD. Both these engines are equipped with a diesel particulate filter or DPF (all off-highway diesels require a DPF for Stage V but not for U.S.’s Tier 4), with power output figures identical to those of the TIC engine versions.

The 3H50T in particular represents a special unit for Hatz. This three-cylinder engine has been specifically developed for machinery that can be powered by a very high torque engine with a power output of less than 25 hp, which means no aftertreatment needed in the United States. For instance, the super popular 3- to 4-metric ton mini excavator category is now embracing the downsizing diesel trend, utilizing under-25-hp engines to avoid the extra cost of aftertreatment.

iHACS stands for intelligent Hatz Advanced Combustion Strategy. That H-Series strategy means capitalizing on a sophisticated combustion chamber geometry, Bosch common rail injection technology, minimized friction and a charge air pressure of 1.7 bar, all ensuring the right dimension of power in less than a fifth of a cubic meter. That’s impressive. All of this results in a smaller, more powerful engine that creates fewer particulates, hence making the exhaust gas treatment more efficient or removing the need all together.

Of course, engines were only part of the message. Customer service was also top of mind for Hatz strategists. In April, the company released Smart Parts, providing customers and distribution partners an intuitive online solution to search for documentation and order replacement parts. Pros can simply use their preferred Hatz scanner app on a mobile device to capture the QR code on the engine, and the right web page of the corresponding Hatz engine model is quickly displayed. This means there is no more need to manually search through extensive books and lists. A bonus for service partners: The new online offer greatly reduces the time taken for telephone support of customers with the previous manual parts search. Time is money for Hatz’s American distribution network. 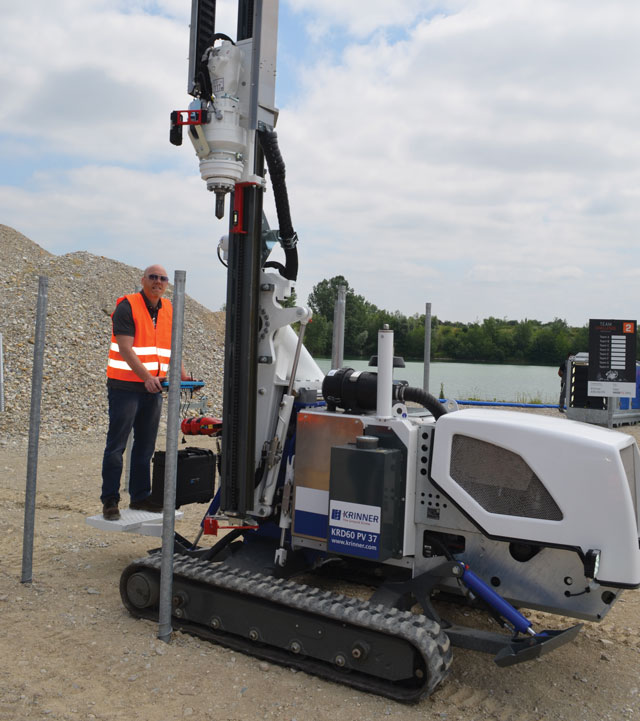 “Today we have 18 distributors in North America with approximately 30 locations,” said Hartoonian, describing the partnership between OEM and Hatz. “We believe in being very hands-on with customers as early in the process as possible. We do that either through our distribution network or directly with customers. Either way, we’re here to support them in that process with engineering, prototyping, testing — really with everything. We try to get involved from an engineering standpoint as early in the process as possible to help make sure the engine is applied correctly. Of course, the goal for us is a great customer experience both for the OEM and the end-user. Bottom line, we believe in being a partner.”

The partners at Hatz are launching seven units in all for their H-Series engine family — including American, European and no emissions variants — from 24 to 83 hp.