Diesel engines and engine technology terminology and jargon can be confusing even to equipment operators, but we are here to help you navigate through this sometimes confusing language of engines. Before we get to definitions, we should clarify what differentiates a diesel engine from a gasoline engine. Rudolf Diesel developed his namesake engine in 1892 because he wanted to make an engine that was more efficient than gasoline engines. Diesel engines achieve higher efficiency because they compress air at a higher ratio. 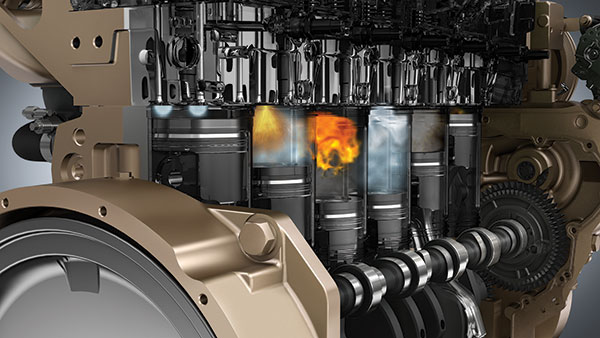 A diesel engine fills its cylinders with air, compresses the air and then injects diesel fuel into the compressed air, usually near top dead center. The properties of diesel fuel are such that the heat of the compressed air ignites the air/fuel mixture with no spark. A spark is needed for a gasoline engine to complete the combustion process. Diesel fuel is also different from gasoline. Aside from the different smell and feel, diesel has higher energy density than gasoline. There are more BTUs found in one gallon of diesel than a gallon of gasoline. Combined with their better efficiency, diesel engines get better mileage than equivalent gas engines.

Aspiration: This means “breathing in.” In reference to an engine, this is how the air makes it into the cylinder. A naturally aspirated engine draws in ambient air using the vacuum created by the downward movement of the piston in the cylinder. Most diesel engines today use forced air induction, either turbocharging or supercharging, to improve engine performance.

Crankshaft: This component is a critical element of the power cylinder portion of the engine. This device translates the up-and-down axial motion of the pistons into rotational energy (torque).

Cylinder: This is the cylindrical chamber in which the piston travels and where combustion takes place.

Cylinder head: The cylinder head is located directly above the cylinders and is bolted to the engine block to withstand the extreme pressures experienced during combustion. It contains the valves and passageways (ports) needed to introduce fresh air, maintain compression and remove exhaust gases.

Displacement: An engine’s displacement is the total volume of air/fuel mixture an engine can draw in during one complete engine cycle. It is calculated by determining the product of the cross-section area of the cylinder, the piston stroke and the number of cylinders. Displacement is usually measured in liters.

Fuel injection: This is the manner by which the fuel is introduced into the cylinder at the proper time during the compression cycle, resulting in combustion. Some engines use multiple injections to lower engine noise, improve engine performance and reduce emissions.

Horsepower: Every equipment operator knows that horsepower is the measure of an engine’s power. But, what does horsepower really mean? James Watt estimated that a horse could do 33,000 foot-pounds (ft-lbs) of work in one minute, and that arbitrary measurement stuck. See the torque entry for more information on ft-lbs. So, 1 hp equals 33,000 ft-lbs per minute, and 1 hp (over the course of an hour) is equivalent to 2,545 btu. Horsepower is a measure of the power an engine can produce against a given load.

Intake manifold: This part of an engine delivers air to the cylinder head for the compression cycle.

Piston: Pistons are lubricated shafts that move up and down inside the engine cylinders. Modern piston design includes various “bowls” in the top of the piston for the purpose of improving combustion efficiency.

Torque: Torque is turning force or rotational force, measured in ft-lbs or Newton-meters. It’s the force someone applies when turning a wrench. To calculate torque, multiply the force by the distance from center. For example, in generating 200 ft-lbs of torque, put 200 lbs of force on a wrench that’s a foot long or put 100 lbs of force on a wrench that’s 2 ft long. The power output of an engine is torque multiplied by rotational speed. A torque curve plots torque as a function of engine speed (rpm).

Transient-response time: The time required for an engine to recover the set speed after a load is imposed. This is an engine’s “zero to 60” factor.

Turbocharging: This is a form of aspiration. A turbocharger, which consists of a turbine and a compressor, puts air into the cylinder more forcefully. The exhaust spins the turbine, which is joined by a shaft to the compressor, thereby pressurizing the intake air.

Below are some emissions terminologies that you may encounter as Tier 4 Interim engines enter the market, Final Tier 4 engines go into production and engine manufacturers develop solutions to meet future regulations.

Active regeneration: If conditions for passive regeneration within an exhaust filter cannot be reached, PM must be removed using active regeneration, an automatic cleaning process. This requires injecting a small quantity of fuel into the exhaust stream and elevating exhaust temperatures to clean the filter.

Diesel particulate filter (DPF): DPFs are through-the-wall flow devices that trap and hold particulate matter (PM) in the exhaust. With the help of a catalyst, the DPF cleans or “regenerates” by oxidizing the trapped PM. There are two types of regeneration: passive and active.

Diesel exhaust fluid (DEF): Selective catalytic reduction (SCR) systems utilize DEF to reduce NOx. DEF is made up of 32.5 percent urea and 67.5 percent de-ionized water. The ammonia in the urea mixes with engine exhaust gases in the SCR catalyst to convert NOx to nitrogen and water vapor.

Diesel oxidation catalyst (DOC): A DOC is a flow-through after-treatment device that reacts with exhaust gases to reduce carbon monoxide, hydrocarbons and some particulate matter (PM).

Exhaust filter: An exhaust filter is an after-treatment device consisting of a diesel oxidation catalyst (DOC) combined with a diesel particulate filter (DPF).

NOx adsorber catalyst (NAC): An NAC, sometimes called a Lean-NOx trap (LNT), is an after-treatment device that acts as a molecular sponge, trapping NOx. When the trap is full, the NAC must be cleaned or regenerated. A clean NAC can reduce NOx by up to 90 percent.

Selective catalytic reduction (SCR): This after-treatment technology reduces NOx emissions by using a urea-based additive, sometimes referred to as DEF. The ammonia in the urea mixes with engine exhaust gases in the SCR catalyst, converting NOx to nitrogen and water vapor.

Variable geometry turbocharger (VGT): A VGT places variable angle vanes in an annular ring around the turbine. Varying the angle of these vanes can boost compressor rotation at low speeds or prevent overspinning at high speeds. Coupling VGTs with electronic controls enables improvements in engine performance and emissions reductions.

Nathan Huss is a technical writer for Two Rivers Marketing, based in Des Moines, Iowa.