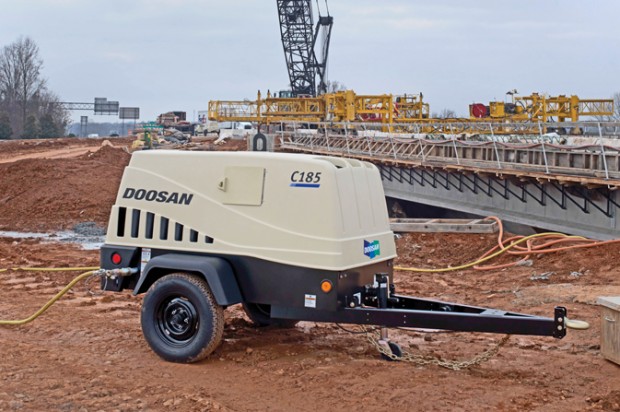 For applications that fall within the 185-cfm and lower range — powering pneumatic tools, irrigation line blowouts and abrasive blasting — the air compressor fuel choices are gasoline or diesel. If the choice between these two options is based on price alone, the gasoline-engine air compressor is the clear winner, especially when compared to Tier 4 Final models.

“With the advances in electronic fuel injection technology, a gasoline-engine air compressor will perform as well as a diesel unit and last nearly as long. Plus, it’s offered at a lower price point,” says Rus Warner, global air products manager for Doosan Portable Power. “Once all air compressor manufacturers are on the same level of Tier 4 Final compliance for diesel engines, the gasoline air compressor will be the least expensive option on the market.”

In addition to lower acquisition price and comparable performance, gasoline air compressors actually outperform their diesel counterparts in some instances. Gas engines are spark ignited, making them easier to start in cold conditions than diesel engines. “Contractors are taking notice of the gasoline units’ cold starting capabilities and choosing gas units because they start easier and warm up faster,” says Warner.

Despite the advantages offered by gasoline-powered air compressors, diesel units may still be the best option based on convenience. Air compressors are typically part of a larger fleet of machines working on a jobsite. It’s a common practice to have a fuel truck refill every piece of equipment on a jobsite on a set schedule. In these instances, having a common fuel source throughout the fleet of equipment makes sense from a logistics and budget standpoint.

“If you’re out in the middle of nowhere, diesel is the go-to fuel because you can get diesel just about anywhere,” says Warner. “But if you’re just comparing diesel to electric, an electric air compressor is a much less expensive dollars per cfm alternative.”

An electric-driven air compressor’s dependence on a power source also requires the unit to remain relatively stationary — never too far from the power source. This can be difficult to accommodate on a busy jobsite. However, in situations with ready access to electrical power and limited transport needs, an electric-driven air compressor can offer a number of advantages, including a wide range of cfm and psi, lower maintenance costs and fewer emissions regulations.

Jamie Jackson is a public relations supervisor for Two Rivers Marketing, based in Des Moines, Iowa.