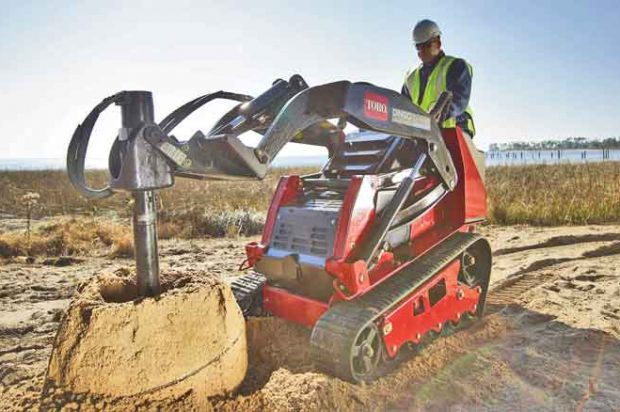 One of the Industry Originators Offers Nine Models Today

In 1995, the Dingo, an Australian-built, wheeled mini skid steer loader made its way to the United States. Its initial popularity in the United States proved that there was indeed a market for compact tool carriers (CTC) and drew the attention of The Toro Co. While the Dingo unit was beginning to make a name for itself, Toro acquired the rights to the Dingo machine in the United States and began developing a 19-hp tracked unit that featured Toro’s patented control system and a walk-behind design. Due to the initial popularity of the product line, Toro expanded its operations and dedicated an entire division to the CTC — the Toro Sitework Systems division. At the same time, manufacturing of the Dingo product line was moved to the company’s facility in Tomah, Wis. The rest of the history of the Toro Dingo focuses on continuous improvement by listening to the wants and needs of the end-user, says Toro.

Since 2006, many other upgrades have been incorporated into the entire Dingo product line, effectively demonstrating Toro’s commitment to innovation and continuous improvement. In 2015, Toro revolutionized the compact tool carrier marketplace with the introduction of the strongest CTC on the market today, the Dingo TX 1000, which features a vertical-lift loader arm design and a hinge pin height of 81 in. With a rated operating capacity of 1,075 lbs on the wide-track model, not only does the TX 1000 stand proudly in a class of its own, but also rivals the rated operating capacities of many skid steer loaders.

Now offering nine models of compact tool carriers, Toro prides itself on being able to offer the broadest range of CTCs on the market today. From the wheeled 220 all the way up to the TX 1000 wide-track model, end-users in the United States have been able to take advantage of the features and benefits of Toro Dingo compact tool carriers for more than 18 years.

“There are three main factors to consider when purchasing a compact tool carrier — easy-to-use controls, availability of attachments and dealer and manufacturer support after the sale,” says Joshua Beddow, marketing manager at The Toro Co. “Depending on the size of the operation, there may be many operators potentially using the machine.

Because of this, the controls should be intuitive, well labeled and easy to understand. It can be said that a compact tool carrier is only as good as its attachments. When making a purchase, consider the features of the base unit, but also the manufacturer’s breadth of attachments and their potential, capability and willingness to grow with your business. Also, equipment is only as good as the support a contractor receives after the sale. That is why the reputation of the manufacturer and the quality of the dealer network require consideration.”