quality job usually starts with quality equipment, but so does a quality company. Take Hunt Construction and Excavating LLC, for example. The Lebanon, Tenn.-based company has been in business for about 20 years and has 24 employees and 18 pieces of equipment. For a business to succeed that long, it takes dedicated people, smart planning and excellent work, but to hear owner Denton Hunt tell it, the entire venture would be nowhere without the right equipment. For Hunt, that was Cat.

“Without having Cat equipment, I would have never made it because I have seen too many people with equipment that broke down or wasn’t getting the job done. So it meant a lot to always get the job done,” Hunt says. He explained the multiple ways in which this was true in his 20 years.

Hunt’s business has always been rooted in residential work, and when asked what provided the biggest help along the way, he immediately said the Cat 305.5 mini excavator, of which he now has several.

Let’s start at the beginning. Back in 1996, before the dozens of employees and consistent residential construction work, Hunt was working on the line building cars at a Nissan manufacturing plant, making a good living. He comes from a large family — eight sisters and four brothers — and his older brothers were in the construction business, but they were 20 years older than him and had already moved away. So, he was around construction somewhat, but the itch to buy his first backhoe was just something he felt.

“I just had to have one,” he says. “I had never even driven one; I was just drawn toward it.”

He started to shop around a little bit but kept coming back to Thompson Machinery — a Cat dealer that was on his way to work. He eventually settled on a Cat 416 backhoe, which is maybe a wild move for a first purchase like this, considering the higher price point of a Cat machine, but he was encouraged by his older brothers that it was the right call.

“When I told them I keep going back to Cat, they said ‘well, you’re not going to go wrong with a Cat.’ But I’m looking at price because I’m a young guy. They kept saying you might pay more, but it’s going to be there when you need it.”

So, now he has this backhoe, but he still had a good job. Little by little he eased into a side business, realizing he was getting pretty good at operating a machine. He continued to work for five more years as his side business started to grow — first $16,000 a year, and then double that, and then double that — until he had amassed two backhoes, a dozer, a dump truck and the realization that he had a full-fledged business here.

Bump in the Road

Business is great today, Hunt reports. In his area there’s “lots of housing, developments, commercial work — if I had 100 people I could keep jobs for them, but we’re going to stay where we’re at.”

But we all know things were different in 2008-’09. At that point, Hunt had a full-fledged business on his hands with a sizable fleet of machines, until the spigot turned off. How did he get through it? With Hunt, it all goes back to the machines.

“I had to sell a lot of equipment and get back to nothing — the bare bones of one mini ex, a skid steer and a dozer — and if it hadn’t been for the Cat equipment at that time, I would have had to file bankruptcy.” The reason being the new Cat equipment he had (Hunt is always keeping up with the new machines) was easy to sell. Lesser or older machines might have still been sitting around, draining his accounts. 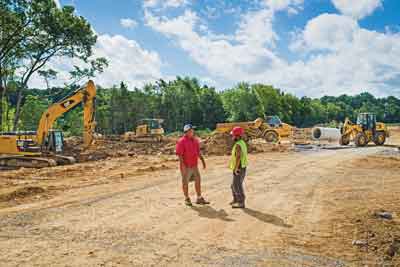 Tools for the Job

Things have obviously improved a bunch since those dreadful few years. The day we spoke to Hunt, he and his team were in the middle of a large subdivision project of about 42 lots. His business has always been rooted in residential work, and when asked what provided the biggest help along the way, he immediately said the Cat 305.5 mini excavator, of which he now has several.

“It’s so versatile,” he says, also touting the virtues of the few skid steers in his fleet. “Our lots are so small, and they are trying to build so much on what they’ve got that the mini exes have really come in to play. On this big job, they are doing water tie-ins, and we can get around so easy across the roads where a backhoe would be so hard to use.”
Seven years ago he started to take commercial jobs. This, too, was spurred along by the right equipment — 320 and 324 track hoes. Then there are all of the attachments, with the buckets, forks and booms for the 914 wheel loader getting more use than anything else.

The story of Hunt Construction and Excavating is also the story of Thompson Machinery, his equipment dealer. Remember, when he walked in there, he was essentially a nobody in this world. Just a guy looking to maybe buy something for a reason he wasn’t sure of yet. Other dealers he walked into treated him as such.

“Other dealerships weren’t bad, but they just looked at me like who is this guy? Just no real respect. They didn’t find out about me or what I needed.”

But Thompson treated him with respect right away, and they’ve had a great working relationship ever since. “They respect the fact I worked my way into it,” he says. “From the main person at Thompson on down, they all know me, and it’s been great. If I had a machine that was down, even if I didn’t have that many, they didn’t let me leave unless I had a machine to use.”