Unlike service and warehouse industries, construction has many variables and moving parts. Materials of many kinds. Equipment of every sort. Main and satellite jobsites. People in the office, in the cab, in the trenches, operating the pipe laser, maintaining machinery. Tracking and evaluating all these job costs is a principal function of construction software.

The construction industry in the United States is some 730,000 companies producing a combined annual revenue of $1.7 trillion, according to the U.S. Census Bureau. That is a lot of individual projects to be managed profitably and numerous software companies have developed products to help. Contractors large and small have come to depend on computer software — with a “small” contractor defined as a company producing $1-2 million in annual revenue.

Computer programming for the construction industry — whether large or small, utility contractor or highway builder — is of two categories. One is the time-honored, on-premise software that is installed on a company’s operating computers. A higher upfront cost of installation is offset by fewer recurring costs. The other type is web-based software that functions in cloud architecture from an off-premises provider server. Downloading this system can cost less than in-house software, but monthly service fees apply.

Software companies usually speak in terms of “modules,” such as a job costing module, estimating module or equipment module. Different programs sometimes are packaged as a unit, or can be offered individually, but this can be more about marketing than function, says Wayne Newitts, marketing director at Dexter + Chaney Construction Software.

“We talk about modules, but our software — and this is true of some others — isn’t really working in a separate module; all the information sort of flows together,” he says. “A project manager wants operational data. A CFO just wants to look at the financials. Well, really it is all being pulled from one master database and divided up into different modules. When using the software, you don’t switch from one module to the other. You just open whatever you are working on.”

Still, contractors enter the software market because of particular needs and usually can find the individual programming component sought. Newitts says some customers buy an integrated software system because they are tired of cobbling together disparate systems.

“A lot of times contractors have tacked together three or four systems — one in Boston had five different systems — and they are not talking to each other unless manually directed. They say, ‘We’re tired of doing this part in Excel, another part in accounting, equipment management over there,’” Newitts says. He adds that another typical upgrade scenario is when “a new or growing company is working off Quickbooks and Microsoft Excel, putting things together on the fly, and realizes something better is needed.” 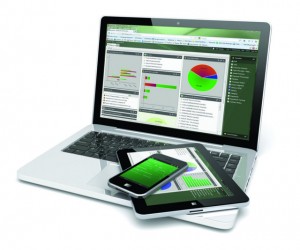 When a contractor is starting out, he may not need the sophistication of construction software, but as they grow, it will become essential.

HCSS (Heavy Construction Systems Specialists) software started 28 years ago catering to the estimating market and 90 percent of its customers still use that product. Estimating software lets an estimator “standardize and automate,” says HCSS CEO Steve McGough. “So if you are doing repeatable work, there is no sense in reassembling crews and estimating production and so on. You can pull it out of the database and build an estimate so much quicker.”

The estimating data ultimately is rolled down into the job costing product to track progress of a job. “A foreman can see how a crew is doing on any given day,” McGough says. “He can tell if the company is losing money or not. It’s instant feedback. If I am laying pipe and losing money every day, I would want to know that the first day. Contractors are working in a low-margins economy and they can’t afford not to know.”

Such critical analysis is how contractors calculate the value of construction software. “Timely and accurate reporting is the payback of job costing software,” says Ode. “It tells you how you are doing. It’s not an overview of the company’s finances, but how you are doing on each and every job. Looking at the numbers once every two months is too late. This way you can make adjustments in real time and maybe save a job.”

A specialized use of construction industry software is on equipment simulators. Vista Training distributes simulators by Simlog, a 15-year-old Canadian firm with customers in 58 countries. Its PC-based systems are used by vocational classes, unions and individual contractors of medium to large size.

Simulator trainees start out with simple tasks as virtual operators and progress to complex machine control situations. Along the way they develop muscle memory, mental habits and situation awareness. The data recorded by a simulator during a training cycle is accessible by a trainer so that a trainee can be helped where the evidence shows he needs it most.

“What they are finding is that once a trainee graduates to actual equipment, the transition to operating proficiency takes less time,” says Chuck Frey, Vista Training’s marketing manager. “That translates into fuel savings.” It also means equipment on a jobsite is not manhandled by new operators, with hydraulic units being slammed open or closed, or one machine being run into another one. Furthermore, a piece of equipment not tied up for training purposes is on a job somewhere making money for its owner.

Simlog offers a simulator for each of these six pieces of construction equipment — hydraulic excavator, dozer, wheel loader, off-highway truck and mobile and tower cranes. In March, Simlog introduced a new model of the excavator simulator with improved graphics, and a motor grader simulator is coming later this year.

“The construction industry is increasingly getting new people with no experience running machinery. The simulator lets a company or school find out who has an aptitude for the work,” says Frey. “Companies are finding it an incredibly valuable tool to increase the efficiency of operators.”

The newest software tool is the app, which is giving contractors mobile control of their daily operations. “Contractors want more choices and we are working to get them the right devices for their organizations,” says McGough at HCSS. “They have laptops in the field, but as those units come up for replacement, they have the option of moving to (app-equipped) tablets at a lower price point. Plus, we offer a variety of apps on smartphones. We want to offer multiple platforms for the industry.”

Ode says introducing the mobile app to the construction industry is “not revolutionary, but there’s a lot of potential for mobile apps to change the way contractors work. Not everybody is ready for more mobility, but when it is right for a contractor, it’s a big deal.”