In a heyday of versatile machines — think skid steers, telehandlers and excavators — one piece of equipment maintains a large presence in the construction market because it is a dual-purpose machine. The tractor-mounted “backhoe” is a staple in utility contractor yards. It has been moving dirt and lifting and loading materials on jobsites for more than 60 years with little indication that its day has passed.

“We definitely have seen a trend toward specialty machines,” says Katie Pullen, brand marketing manager for Case Construction Equipment. “But we also know contractors who say they are never not going to have a backhoe. It might be used just as a wheelbarrow on one site and on another site be the one and only machine.”

Its versatility stems from its heritage. The early models manufactured in this country and in England in the late 1940s and early 1950s were an amalgam of three machines: a tractor, a loader and an excavator. The bucket mechanism was attached to the front of the tractor and a swiveling excavator affixed to the rear; eventually, manufacturers introduced a reversible seat from which an operator could control each tool. Before long, the three parts evolved into a purpose-built backhoe loader.

The question is, does a person considering buying a backhoe loader care most about the excavator in the rear or the bucket on the front? “I think customers who do more construction work may value the front loader a little bit more,”

Hennings says. “They can switch between buckets and a broom at a jobsite. But in the overall market, including utility contractors, there probably is a 60/40 split, with the rear end being more important.”

This front-back calculation might vary by region, according to Alex Wood, JCB backhoe loader sales manager for several Northeastern states. “There are different applications and requirements, and a machine’s most appealing feature might change from jobsite to jobsite, but generally, customers do look at the back end first.”

What buyers are finding back there behind the big rear wheels are increasingly strong and deep-digging tools. At Deere, for example, the top-of-the-line model 710L has a rear excavator with a 21-ft, 9-in. max digging depth powered by a Tier 4 Final 148-hp diesel engine. Up front, the loader has a breakout force of more than 16,500 lbs. It is a big machine.

But brute force isn’t always the deciding factor for a backhoe buyer. Deere’s smaller 310SL is the most popular backhoe in the manufacturer’s lineup. The same is true at Case, where the popular mid-sized 580 Super N has a 95-hp Tier 4 Final engine and excavates to a relatively modest depth of 14 ft, 4 in. The 580 Super N is offered in a wide-track model, but the extra width and resultant stability do not appeal to all customers. “There is a core group that still wants a relatively compact model to move down the street,” says Pullen. 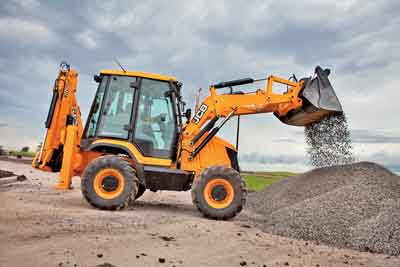 Today’s backhoes aren’t like your granddaddy’s. JCB can attest to that personally, the manufacturer having first configured a backhoe 60 years ago when your granddaddy was in the operator’s seat.

A true compact backhoe is built by JCB — the 3CX Compact. It is about 18 in. narrower than a standard backhoe yet can dig a trench 14 ft deep. The 3CX Compact can be operated in two- or four-wheel steering mode and runs on four equal-sized tires. It is powered by a Tier 4 Final 74-hp Kohler engine. This compactness and maneuverability have endeared the little backhoe to utility contractors, whose work often is in restricted space. “It is marketed as a tool carrier,” Wood says. Bucket, fork and broom attachments fit the compact machine along with some skid steer loader tools.

Yet JCB also offers decidedly non-compact models. The manufacturer’s largest backhoe is the 4CX-17 Super, which like the 3CX Compact also features four-wheel steering on equal-sized tires. But this backhoe is not diminutive: It is powered by a 109-hp EcoMAX Tier 4 Final engine and carries an excavator that can dig down 17-plus ft.

Clearly, contractors looking for a backhoe have a variety of choices. They can go big, small or pick something in between.

Pullen advises contractors to know the application they have in mind when they shop. “All backhoes on the market are fairly comparable. They are relatively close to one another in terms of breakout force and lift capacity. So, for lift capacity to be important, for example, a customer needs to know if he is going to do a lot of lifting.”

Pullen also recommends that an operator physically interact with a backhoe to see if it is a fit. “It is really important for an operator to be comfortable. I always suggest operators get in the seat and operate a machine so they can feel its cycle times and see if they are comfortable with it.”

Wood offers similar counsel to potential backhoe buyers. “Performance of the machine is key. Does it load fast? Are the breakout force and lift capacity what you need? Are the cycle times right for you? Then a buyer should take a longer view and determine if it offers a low cost of ownership.”

As is true across the heavy equipment industry, the inordinate engineering focus in recent years was on upgrading engines to meet EPA tier mandates. “We have focused a lot of R&D on engine changes,” acknowledges Pullen, with Tier 4 Final engines now common. 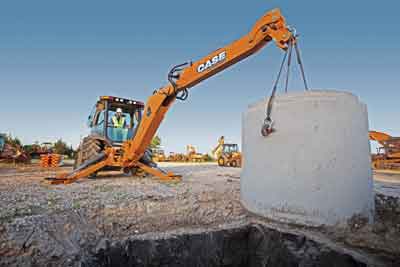 N Series backhoes at Case feature “Power Lift,” which is a hydraulic system that lets an operator throw a switch and channel extra hydraulic flow to the backhoe to break through a resistant situation.

Yet engineering has advanced on other fronts as well, notably in lift capacity. N Series backhoes at Case feature “Power Lift,” which is a hydraulic system that lets an operator throw a switch and channel extra hydraulic flow to the backhoe to break through a resistant situation. John Deere engineers strengthened the boom and enlarged the hydraulic cylinders on L-Series backhoes and offer an on-demand “Lift Mode” feature that locks in engine rpm and boosts lift capacity an additional 10 to 15 percent.

So, today’s backhoes aren’t like your granddaddy’s. JCB can attest to that personally, the manufacturer having first configured a backhoe 60 years ago when your granddaddy was in the operator’s seat. The manufacturer remains a perennial leader in backhoe sales around the world. “We’ve offered lots of innovations that now are commonplace in the market,” Wood says. “Extended bucket reach, four-wheel drive and so on. Now we’re offering four-wheel steering. We try to invent solutions to meet our customers’ needs.”

Pullen says Case works closely with customers to the same end. “We spend a lot of time visiting customers and looking at modifications they have made on our equipment. A customer, for example, asked about changing couplers on the machine, and we ended up doing what met that need. We work to do what optimizes our backhoes for best performance.”

Customers rule at Deere, too. “It’s what we strive for,” says Hennings. “Really our goal is to create a distinctive customer experience. We want to provide customers reliable and durable machines that give them productivity and flexibility at the jobsite.”