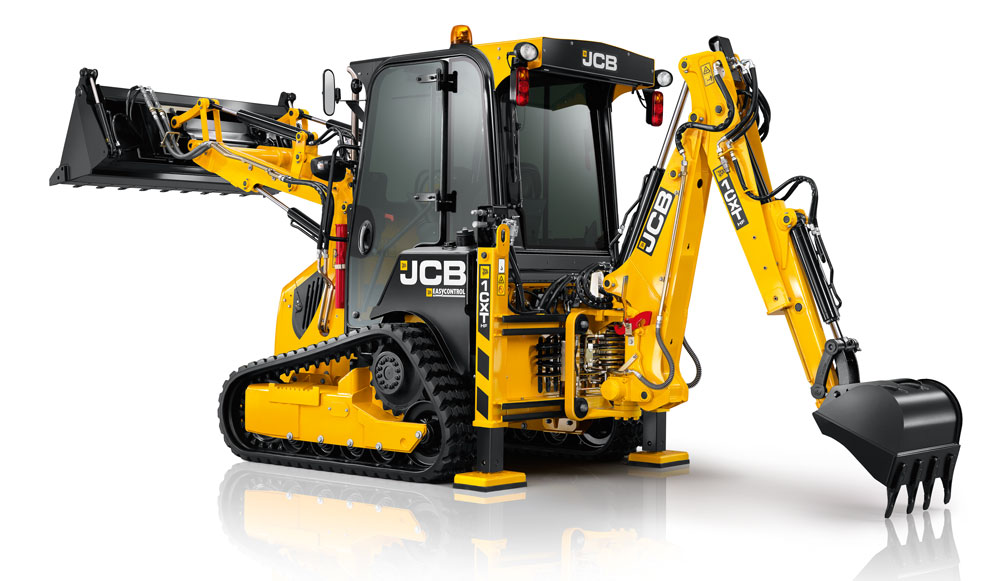 These advantages are making compact track loaders hot, and landscapers, rental yards, residential contractors and even farmers are increasingly buying a skid steer on tracks. So, it made sense when I saw the JCB 1CXT backhoe loader at The ARA Show — a backhoe loader except on tracks.

“It’s not a hybrid between a compact track loader and a backhoe,” corrected Diego Butzke, JCB North America product manager for backhoe loaders, on the rental trade show floor. “It is a backhoe. You know why? The engine sits up front.”

JCB has actually sold this tracked backhoe since 2012, but it’s just now bringing this variant to North America. The 1CXT has a 10-ft, 1-in. dig depth off the backhoe end, is powered by a Perkins 49-hp diesel engine and has a maximum rated loader capacity of 1,466 lbs up front.

“Obviously, with the tracks you have more pushing power, you have better flotation and you have lower ground damage,” said Butzke. “Tracks give this machine the ability to go up steep inclines, up to 31 percent gradients, without any problems. You also have a skid steer and compact track loader quick-hitch on the front. It’s manual, but it can engage any skid steer-type attachment. You have your standard flow circuit at 11.8 gallons per minute and a separate 26.4 gallons high flow circuit.”

The 1CXT has seat-mounted joystick controls that run both the loader end and the backhoe — just spin the seat and the machine automatically detects the operator’s position. The operator station has a choice of open ROPS or cab with air conditioning and heat. There’s reverse driving — just click and hold a button. The 1CXT is also engineered with a side-shift chassis, allowing the backhoe to shift without moving the entire unit.

“It’s not big here, but it’s growing,” said Butzke. “People need a lot more space to run center-mount backhoes — 3 or 4 ft on the sides. The 1CXT stabilizers deploy straight down to the ground. You don’t need that extra space on the side.”

The first American 1CXT units should start arriving in June, but JCB has already pre-sold a bunch of machines, so availability might be tough at first.