Dust in the Wind: Water Suppression Systems on Breakers Aimed at Silica Rules Are Still Niche 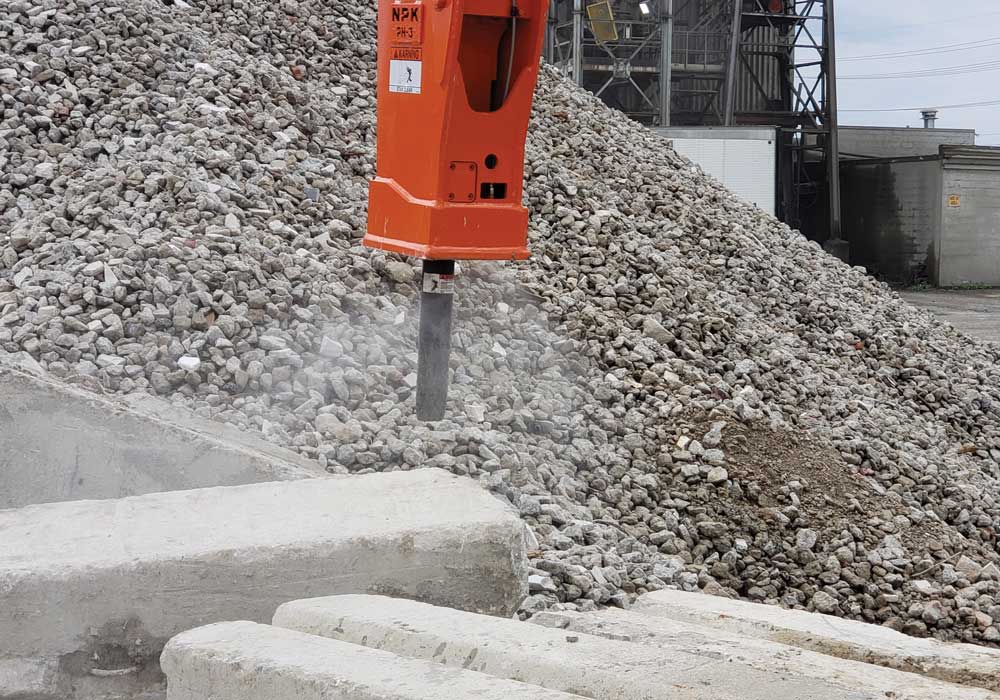 Dust comes in different sizes. The dust you can see is annoying, but it is the tiny dust particles you can’t see that pose a bigger threat. Construction workers who are immersed in dust while sawing concrete or busting up rock are at risk of coating their lungs with fine dust and impairing their health.

OSHA responded to this risk in late 2017 by issuing a “respirable crystalline silica” standard. It requires employers to limit exposure of workers to dust. Read more at osha.gov/silica. Some manufacturers of hydraulic hammer and breaker attachments have responded to the OSHA mandate by introducing dust suppression features with their units.

In the case of Epiroc (formerly part of Atlas Copco), the anti-dust feature came to the market before the OSHA standard. The company’s SB Series of breaker attachments has included dust suppressant engineering since 2005 when a redesign of the company’s breakers began to incorporate it.

“We started to redesign our breakers to make them more efficient, slimmer, sturdier and more compact,” says Rich Elliott, Epiroc product manager of hydraulic attachments. At the same time, a water spray system to knock dust from the air was engineered into the attachment. “We saw in Europe that we had a regulatory issue with silica, so we introduced the dust suppressant feature. That same hammer is also used in the North American market.”

The anti-dust engineering was not heavily promoted after the initial introduction of SB breakers on this side of the Atlantic, Elliott says, “because most contractors showed little interest in the feature.” When subsequent models were introduced, the feature was mentioned without much elaboration. Not until OSHA took a public stand did Epiroc again highlight the value of its fully integrated system and contractors begin to appreciate it.

The system couldn’t be simpler: An inlet port is situated at the top of the breaker, a channel for the water runs through the breaker body and a nozzle outlet on the bottom sprays the water toward the working tip of a chisel or cutter. “Each breaker comes configured with a plug at the bottom where a buyer can insert a nozzle,” Elliott says. The standard nozzle offered by Epiroc produces a wedge-type spray — “like a piece of pizza.”

All of the systems on SB Series Epiroc breakers are engineered for water pressure of 58 psi. A higher-pressurized stream doesn’t seem warranted. After all, the idea is to gently soak dust rising from splintered rock or concrete and settle it to the ground, not blast it apart. Elliott says 58 psi sprays up to 1.3 gal of water a minute in the SB152, which is suitable for a compact excavator or medium-sized skid steer. Some larger SB models utilize two-nozzle and sometimes four-nozzle systems, but water volume doesn’t increase proportionally. For example, four-nozzle breakers consume slightly less than 3 gal of water per minute, with the recommended psi remaining the same in all models.

Over at NPK, a dust suppressant kit was introduced in 2018 in direct response to the new OSHA standard. “We decided to make the bracket on our PH1 through PH4 enclosed-style hammer water-ready,” says Kyle Bias, the company’s product engineer. The water-ready kit consists of a stainless-steel braided hose line, a clamp and inlet and outlet ports. The welded lower bracket on the hammer now has a hole drilled in it for the outlet fitting.

“This means the integrated water channel is in every enclosed bracket going forward, whether or not a dealer or customer uses it. They can simply remove the inlet and outlet plugs, insert a fitting in the inlet and a nozzle in the outlet and connect a supply hose,” Bias says. Older PH1 to PH4 hammers can be retrofitted by drilling holes in the lower bracket and a front plate assembly and thread-tapping the inlet and outlet ports.

Will NPK eventually fully integrate the system into future models of its hammers? Maybe. “We will consider integrating a water channel into our breakers as we continue to develop and improve our products. It is something we will need to study and look at closely followed by a lot of testing,” Bias says. “Right now, the demand is very low for this feature. Integrating it into the bracket as we have is very cost effective and has easy maintenance features.”

NPK envisions lower water usage in its anti-dust system than Epiroc does in its system. While Bias doesn’t specify a recommended psi, an NPK dust suppression brochure suggests a 60-psi spray from a PH1 breaker will utilize just a quart of water per minute, presumably because the spray is finer. 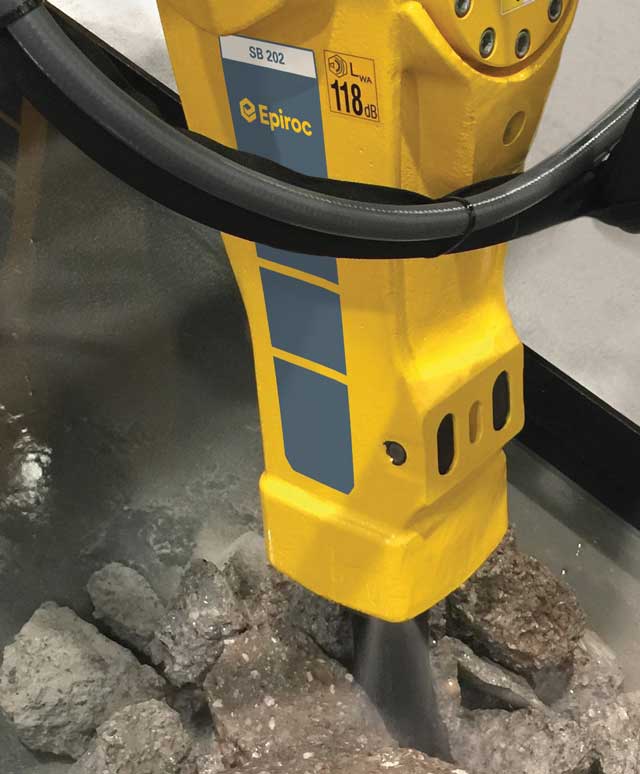 Not tackled by the two manufacturers is the matter of sourcing the water to be sprayed onto the working chisel point. A piece of compact equipment is not a perfect machine for carrying a large drum of water and a pump. And not every worksite is adjacent to a pond.

“What I have seen is people coming up with their own ideas,” Elliott says, “including tanks on top of skid steers. Even if a site has room for a mobile water tank, the tank or the hose running from it is just something else a hammer operator has to be aware of when he moves a machine. I’m not sure contractors have figured out what they want to do yet. Each jobsite is different.”

Bias concurs. “A water tank mounted on the roof, side or back seems to be the most common solution. However, having a large tank on the roof or hanging off the side obviously is not ideal. Water supply will continue to be a challenge until OEM carrier manufacturers begin integrating a water tank and pump into their machines.”

Manufacturers may not jump on that any time soon, because contractors are not exactly knocking down doors for dust suppressant products. “When the regulation was first announced,” Bias says, “we received a lot of interest, which drove us to redesign our enclosed hammer brackets to make them water-ready. I think there was some initial confusion about the interpretation of the regulation as well as how it would be enforced. It has been in effect for some time now and interest in suppressing dust has definitely slowed, though we still do get requests.”

A rumor in the industry is that some contractors in California have decided not to use the water spray units against silica dust because the EPA fine for contaminating a water source is greater than the OSHA silica dust fine. True or not, spraying dust is hardly standard operating procedure in breaker work.

Until the regulatory dust settles, the market for breaker heads with self-contained spray systems is unclear. Though silica dust and the silicosis it can produce in victims is real, keeping worksites free of the dust is a work in progress. “We used to try to just keep the dust down so a breaker operator could see,” Elliott says, “but that was before the silica rule. Water keeps a site from being too dusty, but is that a real solution? For now it’s one solution, and we have an integrated dust suppression system to provide it.”

Why Don’t Excavators Use Dust Vacuums?

Manufacturers have a different solution for dust raised by tools smaller than hydraulic hammer attachments, such as jackhammers and concrete saws. The dust produced by those tools often is vacuumed away. However, it is a whole other matter to similarly equip a hydraulic breaker on the working end of a compact excavator boom. For one thing, the volume of dust can be greater. For another, the working point for the chisel often is irregular — a boulder or chunk of scrap concrete — unlike the smooth surface of concrete pavement or a basement wall. Consequently, the interface of the vacuum collector and object being battered is more difficult.

Greater vacuum pressure is required as well, which means the suction pump and collection container are likely to be bulky additions to an operating machine. All in all, vacuuming silica dust in demolition or quarry work is an unwieldy proposition. Not that watering down the dust is a perfect solution for heavy equipment. After all, the product of dust and water is mud. An unpaved working space can turn into a bog or at least become sloppy if enough hours are spent in one place shattering rock or concrete. A lot depends on the nature of the work site. Hermetically sealed cabs and laser-demolition techniques may eliminate the silica threat in construction workplaces in the future, but for now dust remains a problem for man and machine. 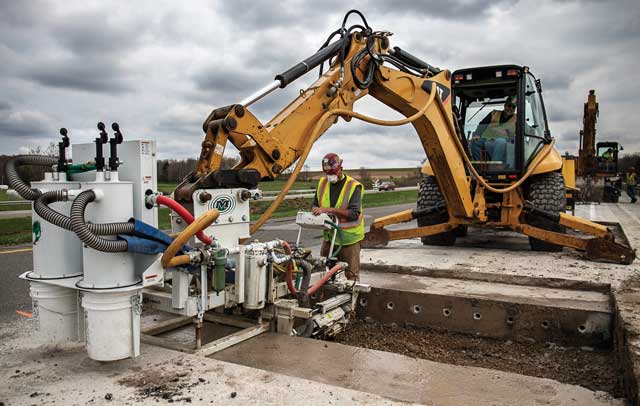 Minnich Mfg.’s A3/A6 machine-mounted drills maximize productivity and safety on patchwork jobs. Featuring up to six drills, these pneumatically powered units can be mounted to an excavator, backhoe or skid steer loader to form a self-contained and highly mobile drilling solution for full-depth repair. Besides offering the maneuverability to get jobs done faster, A3/A6 drills provide a safer alternative for operators, eliminating fatigue by using the carrier to transport the drill. Available side-shift functionality enables operators to drill a second set of holes without having to reposition the carrier. An optional dust collection system is available, meeting the requirements for dowel pin drills found in Table 1 of the Occupational Safety and Health Administration (OSHA) final respirable crystalline silica standard when used with an appropriate filter. For more information, visit minnich-mfg.com.

Click this link for more on the latest in breaker attachments.