Wheels in Motion: The Compact Wheel Loader Market Rolls a Little Larger in 2018 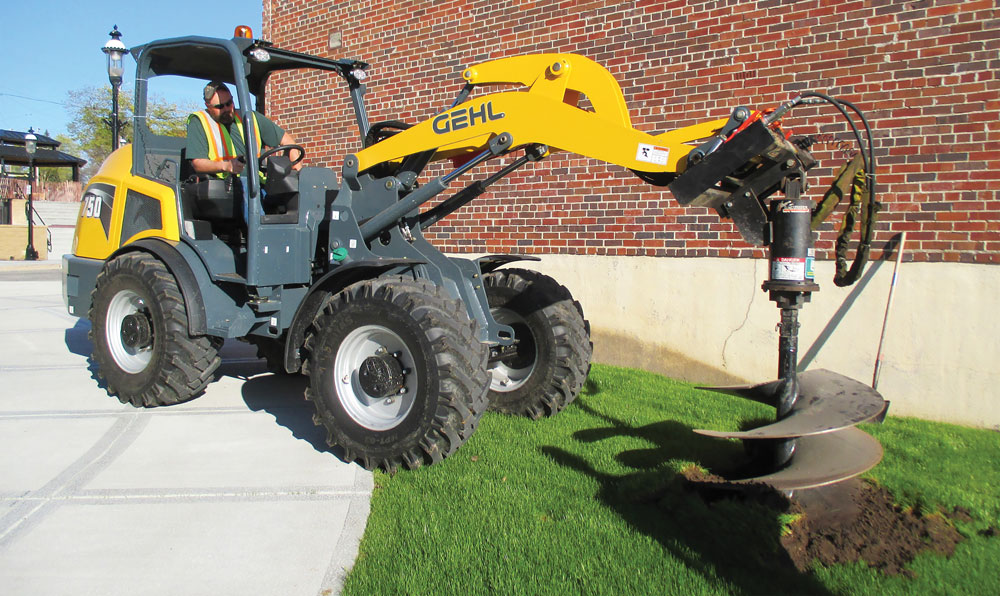 These smallish, tool-carrying, articulating or all-wheel-steer loaders are becoming popular enough that we added compact wheel loaders to our annual Spec Guide in 2017, and we highlighted 13 major manufacturers including Case, Cat, Gehl, Hitachi, John Deere, Kubota, Mustang, New Holland, SDLG, Takeuchi, Volvo, Wacker Neuson and Yanmar. Despite all these machine makers, the units sold in the U.S. market doesn’t hit the big sales numbers you’d see in Germany or Japan, but it’s growing.

“Using the data through November 2017, the U.S. estimate [for units sold] will be close to 3,500 units for the year, which will be approximately an 11 percent increase over 2016,” says Scott Tjelmeland, national sales manager for Hitachi Construction Machinery Loaders America. “Compact wheel loaders are a growing market and have been for years, so with the improved economy and outlook, we can safely say 2018 will show us yet another increase in compact wheel loader sales.”

These sales numbers can fluctuate depending on how you define compact. Most small wheel loaders are categorized by horsepower (typically anything under 80 to 110 hp) and bucket size, which is measured in cubic yards (1 to 3 cu yds for compacts). The numbers above do not include above 80 hp. If we do that…

The small wheel loader’s main competition in America is the skid steer and its tracked cousin the compact track loader, which sold a combined 70,000 units in 2017. Skid steers and track loaders are American-conceived machines, so we naturally gravitate toward them, but compact wheel loaders have lots of advantages over those skidding-type loaders. For starters, on compact wheel loaders, operators sit up higher, giving better visibility to the attachment and job at hand. That means more safety. Entering and exiting a wheel loader is also much safer than with a skid steer (unless maybe it’s a JCB or Volvo one-armed skid steer), where you must climb over an often dirty and dangerous hydraulic attachment to sit in a moderately comfortable operator’s compartment. 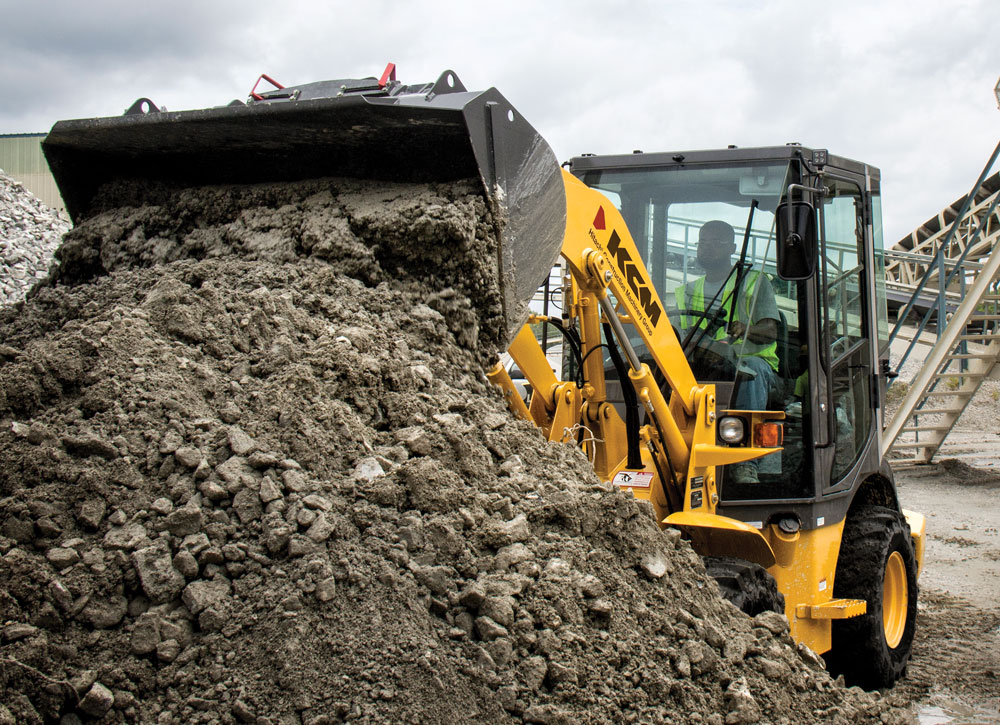 The largest market segment for compact wheel loaders is landscapers, but all segments that have a load-and-carry application are starting to see the benefits.

Also, compact wheel loaders articulate or use all-wheel drive which is: A) easier on tires; B) easier on turf and other surfaces; and C) better on fuel efficiency. And while compact wheel loaders are typically 20 to 25 percent higher in initial cost than a similar-sized skid steer and definitely lacking in similar hydraulic attachment power, they save up to 30 percent on fuel, and the tires can last up to five times longer.

“Ground speed, ground clearance, better fuel consumption, longer wheel base for better ride quality, visibility is much better because of height advantage and small wheel loaders have greater lift capacities,” says Michael Shebetka, product manager with Takeuchi-US Mfg., citing pros and cons. “The disadvantages are the overall height of each unit and their ability to work under low overhead obstacles. Other disadvantages can be size and length to maneuver in confined spaces, and the units tend to be more unstable on rough, uneven terrain.”

Also, their size can be a little intimidating. Boasting big ranges of operating weights between 4,000 to 20,000 lbs and lifting capacities from 4,000 to 12,000 lbs, compact wheel loaders are obviously big for the compact arena.

Size and specs are always a good place to start — engine horsepower, operating weight, breakout force, bucket capacity, travel speed, turning radius, width, height and beyond. To simplify it, start out by focusing on loading (the major application). Selecting the right loader is often based on the amount of material (measured in cubic yards) that needs to be moved per hour, the weight of the material and the area that the loader will operate in. It’s important that you know how the loader will get the material, how quickly the material needs to be moved and where the material needs to go. Look for a brand that accommodates your bucket work.

“Digging and scraping performance is maximized for Gehl and Mustang wheel loaders through some of the highest breakout forces in their respective classes and front and rear locking differentials,” boasts Frederik Crul, Manitou Group global product manager for wheel loaders. “These units also include standard features such as a digital instrumentation display, Power-A-Tach Hydraulic Attachment System, proportional auxiliary hydraulics and Z bar-type linkage with mechanical self-leveling.”

“Make sure all dimensions and performance parameters of the loader work for your business,” suggests Shebetka, running through the main decisions you’ll face. “Can this loader safely lift, reach, dump and enter confined or low lying overhead areas where I need it to operate? Do not push the loader’s capabilities so close to the tipping point where you leave little or no room for error. Choose between bias tire cleat tread type for dirt and soft terrain or a radial tire for hard surfaces that wears longer, grips well on snow. Remember the right size and type of bucket. You do not need a heavy dirt bucket when you are handling light material like wood chips or grain. Check out the high-speed travel option if you plan to use a unit over a long distance.”

Besides specs, there will be options out the wazoo. First off, operators have the big choice of choosing an articulated or all-wheel steer machine. An articulated loader excels in indoor applications, narrow spaces and on sensitive terrain (like pristine lawns). An all-wheel steer loader is a little less maneuverable but is known to have more stability on uneven grounds such as slopes. Besides drivetrain, there will be plenty of high-tech amenities, optional upgrades and differentiating standard features — joystick and wheel controls, parallel lift and return-to-dig functions, air conditioned and heated cabs, creeper and rimpull controls, tire and attachment choices, roading lights and rotating beacons, LCD displays and security features and so much more. Some units even have telescoping booms. Like buying a car, the options seem endless.

“Like many types of equipment, the biggest changes have been in the areas of operator comfort, increased reliability and the availability of different attachments so an operator can get the maximum utilization out of his loader,” notes Berkhimer. “The biggest point would be to find a unit that the operator is comfortable to operate eight hours per day, that offers good reliability and that can operate the different attachments that are used by the operator.” 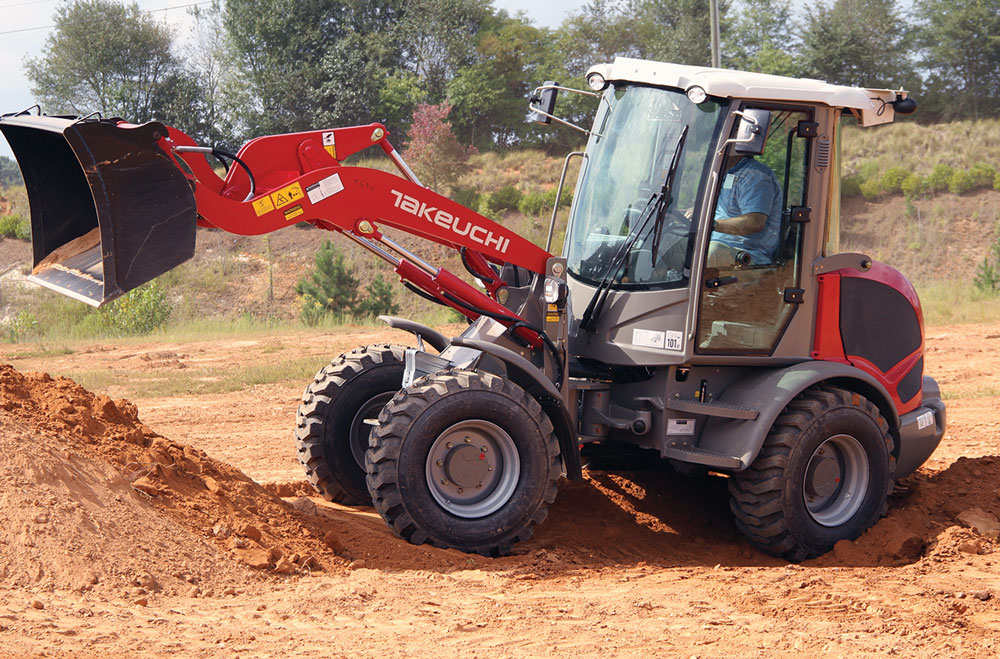 Compact wheel loaders are: A) easier on tires; B) easier on turf and other surfaces; and C) better on fuel efficiency than a skid steer.

Of course, it’s not just about loading. Compact wheel loaders can wield hydraulic attachments (in the 15- to 33-gpm range), with the ability to travel between different tasks at speeds up to 20 mph. Augers, cold planers, grapples, snow blowers — a compact wheel loader has a toolbox full of job possibilities. Higher-flow hydraulics allow contractors to use attachments like snow blowers more effectively and efficiently. Machine speed has increased to quickly transport material, and the introduction of ride control provides operators a shock absorbing system that allows them to travel faster, not bounce on the terrain and maintain the bucket or attachment load.

“Most compact wheel loader machines have the skid loader attachment plate design as a standard feature to add to the machine’s versatility in handling the same attachments,” Crul says. “Over the last decades, all compact wheel loaders have moved to joystick control instead of multiple levers. The new engine regulations have made it very difficult to fit engines with all the add-ons into the small engine compartment, but engines matched with hydrostatic pumps and remote-mounted cooling fans have made advances on these type of machines.”

How much will all of this cost? Prices for compact wheel loaders range from $55,000 to $100,000, compared to larger skid steers and track loaders at $70,000 to $85,000 (higher for higher operating capacities). “The largest market share companies in the North American compact loader market would be John Deere, Volvo and Caterpillar,” says Berkhimer. “There are then a number of companies that would fall into the 3 to 10 percent market share range.”

Who’s using these machines? The largest market segment for compact wheel loaders is landscape users. The machines are used for a variety of applications, including spreading mulch, moving materials, etc. Snow contractors also make up a large segment of users, with machines equipped with buckets, snow blowers and blades. The higher horsepower range also has applicability for construction and earth moving.

“Although it seems that progress is being made in almost every segment of the compact market, there are a few that are catching on to the compact wheel loader benefits in a leadership way,” explains Shelton. “Landscaping and landscaping suppliers in general are buying more compacts, but in the north many landscapers also work through the winter using them for snow removal. Agriculture is another growing market due to the many load-and-carry applications of the industry. However, all segments that have a load-and-carry application are starting to see the benefits.” 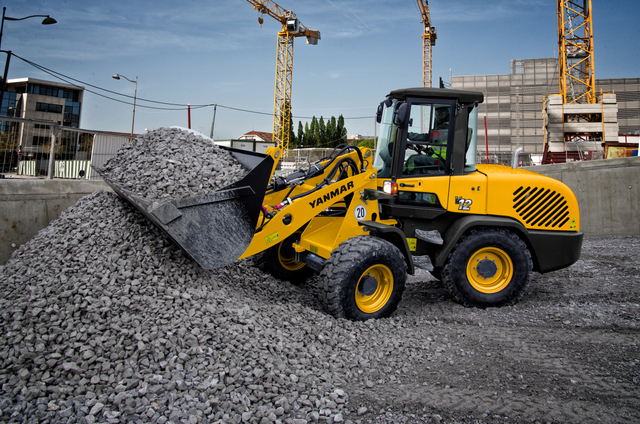 Even if it costs a little more upfront, forward-thinking contractors are focused on productive and efficient solutions, especially in today’s competitive economy. If crews are looking to expand the value of their small equipment fleet, they might do well to consider a relative old-comer to the American machine family — the small, tool-carrying compact wheel loader. We expect more applications and more enthusiastic owners as buyers better appreciate these growing alternatives in the American iron industry. And while rental isn’t an enormous market right now, it does well to borrow a few machines to test-drive.

“Renting a compact wheel loader for a few days is an option, and you will be happy with a machine that easily maneuvers through buildings and on the jobsite,” says Crul. “Work with your local dealer who has the knowledge and history of compact equipment.”