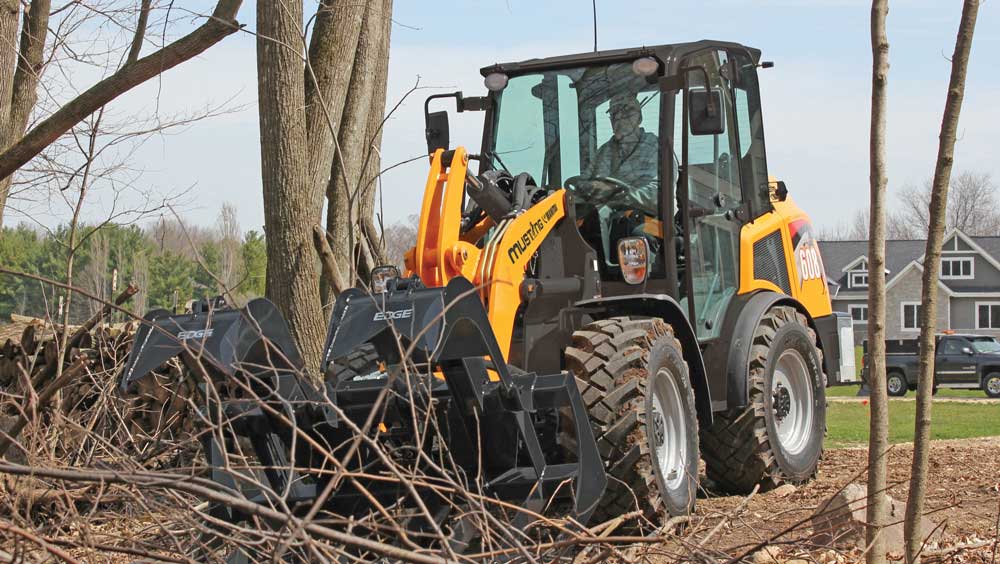 Mustang by Manitou began in the 19th century as the Owatonna Mfg. Co. Starting as an agricultural implement manufacturer, Mustang by Manitou has since grown into a 21st century compact equipment leader. Through innovation driven by customer requests and feedback, Mustang by Manitou describes its units as workhorses that deliver safety and performance for construction, agriculture and industries beyond.

Mustang by Manitou manufactures three wheel loader models, the 608, 708 and 708T. With articulated steering and speeds up to 19 mph, these units can easily maneuver on a jobsite and boost productivity with fast work cycles. Powerful engines, rated 65 or 74 gross hp, are at the core of Mustang by Manitou articulated loaders. A heavy-duty oscillated articulation joint offers turning angles up to 45-degrees to the left and right and 10 degrees of oscillation in both directions for optimal traction and movement.

Weighing in at 4- to 5-metric tons, Mustang by Manitou articulated loaders are built for heavy lifting. With some of the highest bucket breakout forces for their respective class size, notes the company, reaching over 13,000 lbs, operators can fill the bucket to the max, while front and rear locking differentials allow maximum tractive effort for pushing into the pile. The maximum lift height of the Mustang by Manitou 608 is 130.5 in., the 708 is 136.8 in. and the new 708T telescopic articulated loader has the added benefit of a telescoping arm that gives an extra 44 in. of reach, bringing the hinge pin height up to 198 in. at full bucket extension.

The cabin is designed for comfort with a seven-way adjustable seat, fully-adjustable steering column, cup holder, adjustable armrest and wide openings that provide 360-degree operator visibility. An exclusive multi-function joystick also controls all hydraulic functions from one joystick, allowing the operator to keep one had on the steering wheel.

Mustang by Manitou articulated loaders come standard with the Power-A-Tach hydraulic attachment system that features a skid steer interface, allowing operators to utilize attachments they already own. Other standard features include an inching pedal for precise speed control, front and rear locking differentials and tapered Z-bar linkage with mechanical self-level and return-to-dig.

The ability to maneuver freely in tight places, while inflicting minimal ground damage, makes these units adaptive and ideal for multiple applications. Add in the versatility from a wide range of attachments, and Mustang by Manitou wheel loaders are great tools for the farm, jobsite and everything in between.

“Cab configurations can impact both visibility and comfort for the operator. Options include a completely open ROPS structure, a ROPS structure with front and rear windows or a full cab with or without heat and air conditioning,” says Frederik Crul, global product manager for Mustang by Manitou wheel loaders. “Choosing a cab that best fits the application and operator preference can increase performance and functionality of the equipment.”