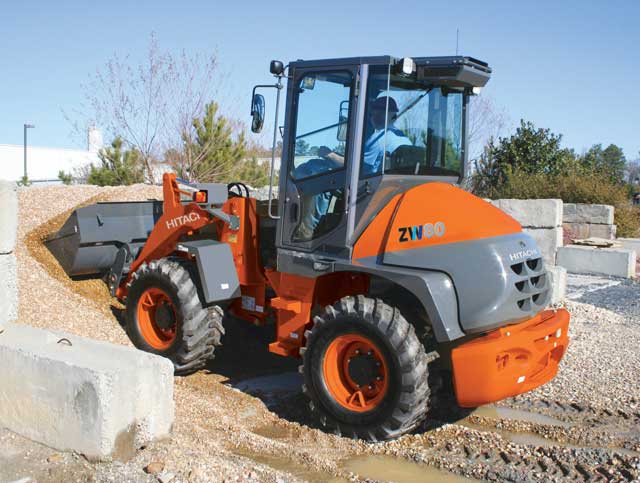 For as long as Robert Drost can remember, families have been making their way north to his little corner of Pure Michigan. And, as he says, who can blame them? The woods, inland lakes, ski hills, streams and lake shoreline in and around Petoskey form what is arguably America’s greatest blend of nature. It is raw yet peaceful, invigorating yet calming, difficult yet simple. It is, well, Pure Michigan. Drost has always been there, having never left, but he understands and appreciates the longstanding draw from afar.

One thing that has changed over the years is the accommodations weekenders, vacationers and retirees expect along the upper west coast of Michigan. That goes for the prized plots in and around the picturesque lakefront communities of Bay Harbor and Charlevoix but also for the more remote inland properties. The small, humble cottages or cabins that once lined the small lakes and gravel back roads are becoming rare flashes of days gone by. They are now fewer and farther between, surrounded and dwarfed by multi-million-dollar dream homes.

As a young man growing up in the area, Drost worked on the small farms that then dominated the region. “Landscaping? I didn’t even know what that word meant,” he says. “Seriously, I don’t think many people up here did.” They do now. “These people come up here to enjoy the lakes and the fresh air, and they will put more money into their homes here than they do downstate,” says Drost. “They trust us, and we don’t take that lightly.”

To deliver the best means being the best and having the best, says the passionate and highly charismatic Drost. In a business type — landscaping — that can run the gamut in terms of quality, expertise and performance, this is a professional organization in the most complete, thorough and strictest definition of the term.

The team grows into the hundreds during peak season, but Drost retains a core, full-time, in-house staff year-round that includes highly trained and experienced designers, project managers and division managers. Drost credits much of the daily organizational success to Dale Drier, who came aboard in 1997 when the company was about six years old. Now the general manager, Drier is himself a designer who quickly adopted the Drost vision — a mix of traditional service and progressive culture.

“They say no one man does a team make, and that’s really what you see here,” says Drost, known to most people as Bob. “This place is like the hand. You’ve got people who are thumbs, people who are pinkies, people who are index fingers — they all have different attributes. I realized a long time ago it’s not about me … it’s about us. As a team, we can conquer things and we do. My biggest contribution is a little out-of-the-box thinking.”

And, it must be noted, that although not an operator himself, “I love the equipment. I love seeing it, I love learning about it and I love buying it.” Among the most recent acquisitions is a Hitachi ZW80 compact wheel loader, delivered by Bill McDaniel of Grand Equipment Co., the local authorized Hitachi wheel loader dealer, based in Grand Rapids, Mich. 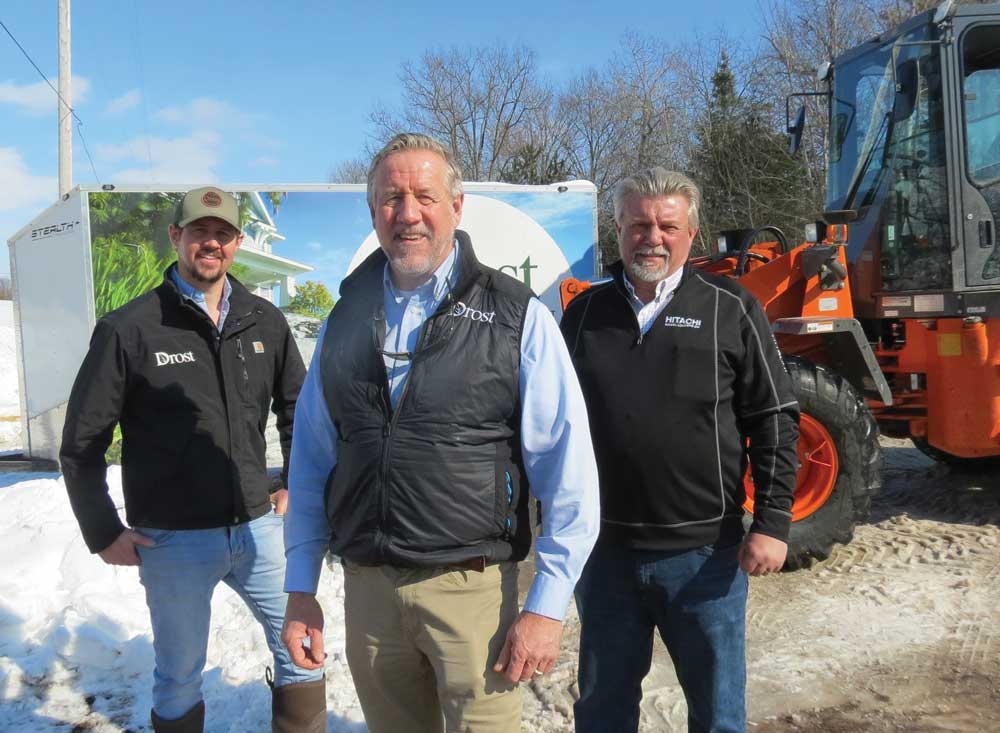 From the left: Dustin and Robert Drost, along with Bill McDaniel of Grand Equipment, the local dealer.

Replacing a competitive model, the new ZW80 is part of a construction fleet of more than 30 excavators, skid steer loaders, compact track loaders and wheel loaders. Drost Landscape also owns and operates fleets of trucks, as well as specialized equipment germane to company divisions such as tree service and maintenance.
Starting in 1991 with a skid steer, dump truck and “four guys and myself,” Drost says it’s easy to remain humble. “I remember when we got three pieces of equipment and I thought, there, one for every crew, perfect! … and now we run 19 jobs at a time.”

It hasn’t taken long for Drost Landscape equipment operators to take note of the 1.2-cu-yd addition to the loader fleet. “Completely unsolicited, one of the guys said to me just the other day, that new Hitachi is the best loader you’ve got, boss,” said Drost, whose son Dustin conveyed the same story from a different time. “That operator has grown up around machinery,” said Dustin, a project manager, “and he’s kinda picky, to be honest.”

That operator, Paul Robiadek, works on a crew under supervisor D.J. Hall. Despite it still being the heart of winter, they were busy constructing an outdoor showpiece at a new home near Charlevoix. As well as snow removal, Drost Landscape had about a half-dozen active jobs going in the dead of winter — and that, says Dustin, has been the way for Drost Landscape for the past decade if not longer.

Not a big man, which can traditionally be a factor in limiting visibility to key contact points when operating wheel loaders, Robiadek raves about the design of the ZW80. He notes the modern exterior sloping and pillarless cab design with floor-to-ceiling glass provide clear visibility all around the machine, “and with a smaller counterweight, you don’t have to worry as much about turning around and hitting something. When you’re in a tight area such as this, you can see all around you and make sure you’re clear.”

At this jobsite, the ZW80 was maximizing its 63 hp of engine output and 8,280 lbs of breakout force to load, move and dump snow, dirt and building materials, as well as to load trucks, which it can still comfortably do at its compact size.

Most impressively, Robiadek swapped out the loader bucket for a fork carriage to move huge rocks to be used in the designed landscape — on average roughly 72 in. x 16 in. x 6 in. apiece, the rocks were in some cases being moved two at a time. “All those rocks you see stacked here? I had no problem getting all of them down here from the road, through the trees. The rear tires on that Hitachi loader never came off the ground once,” says Robiadek. “It’s by far one of the best smaller machines I’ve ever operated.” His supervisor and seasoned watcher Hall confirmed the dual rock lifting claim was no exaggeration. Weighing in at a standard 12,220 lbs, the Hitachi ZW80 is rated to lift and carry loads of up to 3,587 lbs.

Welcome to the Family

Robert Drost admits that, often when McDaniel calls from Grand Equipment, the conversation can go just about anywhere. Good friends are like that. The trust that homeowners in and around Petoskey have placed in Drost Landscape is exactly the type of trust he appreciates in the people he, in turn, does business with. That’s certainly the case with McDaniel and Grand Equipment.

“Your equipment does work,” replies McDaniel. “A lot of guys don’t acquire hours the way you do.” It seems that Petoskey’s first Hitachi ZW80 will be keeping busy for some time.