We Interview Three Big Players in the Walk-Behind Trencher Market

Some 70 years ago, laborers dropped their picks and spades and celebrated the arrival of the first compact trenching machine. The little cup-and-chain-on-a-boom trenchers made waterline and electric line excavations almost child’s play. These walk-behind or pedestrian trenchers still are making trench work easy today and in much the same way as they always have.

“The trencher has evolved over the years,” says Andrew Schuermann, product manager of Ditch Witch trencher and compact utility products, which basically invented the first compact trenching machine, “but they still really perform the same task and have the same components as they did many years ago. The engines and digging chains have evolved, but they are performing the same essential jobs.”

The walk-behind trencher’s essential task is to lay open a neat, straight trench up to 4 ft in depth so a plumber, electrician, landscaper, cable company employee or DIY property owner can bury a line of some sort. Because several manufacturers produce these trenchers, customers benefit from competitive pressures to have the machines perform the one essential task more and more efficiently.

In Schuermann’s view, key improvements in Ditch Witch trenchers have been in operator ease of use and in productivity. “The same innovative spirit that led to the first compact trencher decades ago continues to help customers do more today,” he says. “We have been in this with our customers a long time and have engineered a product that is one of the most productive in the market.” The company offers walk-behind machines with 12-, 16-, 21- and 22-hp Honda or Briggs & Stratton engines.

The other asset in digging with a Ditch Witch walk-behind trencher is the support generated by a dealer network of more than 100 locations around the country, Schuermann says. “That is a very strong piece of the Ditch Witch story, especially compared to some of our competitors.” 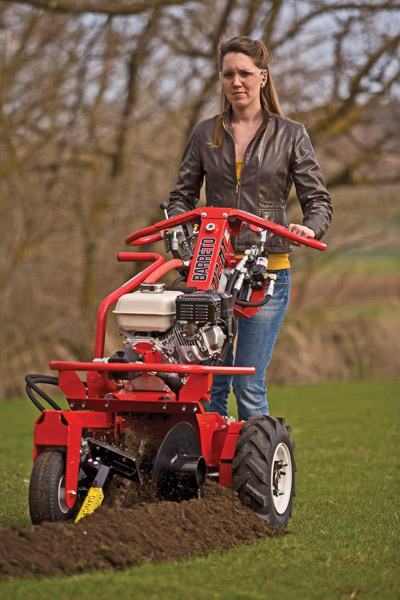 The Barreto “micro” trencher features an automatic propulsion system in which a hydraulic sensor adjusts forward movement to the load on the digging chain, preventing stalls; this is a boon to inexperienced trencher operators.

The Toro Co., like Ditch Witch trenchers, also promotes ease of operation. “One of the most significant features that sets us apart from competitive machines is the control system. We really designed this product to be very easy to use by someone without any experience,” says Josh Beddow, Toro’s marketing manager for sitework systems. “People feel comfortable running it in a short amount of time. Consequently, it is popular as a rental machine, where the end-user is not someone who runs equipment every day.”

Toro fundamentally changed the profile of walk-behind trenchers when it rolled out its TRX models. The company was the first to substitute nylon reinforced rubber tracks for tires on the walk-behind machines. Toro’s three trenchers today are powered by twin-cylindered Kawasaki engines — 16, 20 or 26 hp.

“We started with our wheeled products in the 1990s and that kind of led us to build around compact construction equipment,” says Beddow. What Toro learned about tracks on other pieces of equipment, its engineers applied to walk-behind trenchers. None of Toro’s three TRX models ride on tires.

Contractors can order any of Ditch Witch’s four models of walk-behind trenchers in either a wheeled or tracked configuration. Manufacturers say the latter is the popular choice. “We have seen quite a shift toward tracks,” Schuermann says. “They offer better flotation in loose or damp soil and better traction. Rental store operators like them because they aren’t called out to deal with flat tires. The majority of our customers are ordering walk-behind trenchers with tracks.”

At Barreto Mfg., a LaGrande, Ore., equipment-maker, two distinct walk-behind trencher lines are offered — one dedicated to wheels, the other to tracks. The machines are individually designed for one method of locomotion or the other, which means a customer cannot, for example, order the smallest Barreto trencher on tracks.

“I think the digging depth is the determining factor in choosing wheels or tracks,” says Barreto’s general manager, Tim Phelps. “There are always exceptions to the rule, but if someone calls up and he only needs to go down 12 to 18 in., you are not going to sell him a tracked trencher. But if a trencher going out of the rental store has to dig down 36 in. or deeper, 95 percent of the time that machine will be on tracks.”

Barreto has repeatedly distinguished itself in the lawn and garden and small construction equipment industries by introducing all-hydraulic products, including the first all-hydraulic walk-behind trencher in 1995. That machine is still offered but is outsold today by other Barreto models. In all, Barreto offers three wheeled trenchers, including “micro” and “mini” units that have co-opted the lower end of the walk-behind market. The “micro” trencher features an automatic propulsion system in which a hydraulic sensor adjusts forward movement to the load on the digging chain, preventing stalls; this is a boon to inexperienced trencher operators. Barreto’s five tracked units roll on tracks more than 7 in. wide and are powered by Honda, Subaru, Briggs or Kohler engines of 13 to 23 hp.

For customers wanting deep and wide trenches, some of the higher-powered Barreto and Toro models can create 48-in.-deep excavations. The Toro TRX26 and Ditch Witch RT24 can open an 8-in.-wide trench — a 6-in. furrow being the standard maximum width. As befits a specialty machine with decades of in-the-field experience behind it, trencher operation and maintenance are not difficult to grasp. Read the manual, and note that manufacturers advise users to lubricate as stipulated, check track and chain tension regularly, clear away debris from moving parts and that’s about it.

Because a walk-behind trencher has a dedicated purpose, it is frequently rented for one-time use rather than purchased only to be parked in a shop for long periods. Commercial trenching companies purchase the compact trenchers outright, of course, but even then rental of additional trenchers is an option for a particular project. Both markets are growing, say manufacturers, as new markets (golf courses) open and new products (fiber-optic lines) are introduced.
“It seems like at every trade show we learn of a new market for the trencher,” says Ditch Witch’s Schuermann.

Digging depth is the determining factor in choosing wheels or tracks. If someone needs to go down 12 to 18 in., go with wheels. If a trencher has to dig down 36 in. or deeper, go with tracks.

Users of the walk-behind trencher will help determine how the machine evolves from here. Over at Toro, Beddow can only speculate what the optimum walk-behind machine might eventually be. “It is kind of hard to foresee the future, but then we didn’t see the tracked trencher either.”

Phelps believes Barreto is especially well-positioned to evolve its machines from customer feedback because of the relatively small size of the company. “Because we are small, we can filter the feedback, address it and make changes very quickly.”

And that’s really the big key to changing the trencher market: The needs of owners and operators spur progress in the walk-behind trencher industry.