A Cut Above: Sit-On Trenchers Offer a Versatile View of the Jobsite

This promotional photo of the Toro RT1200 riding trencher is an eye-opener. The tool-carrier chassis rides on four triangular rubber tracks with a backhoe mounted on the front above a blade. A trencher bar is mounted in the rear. It smacks of a Rube Goldberg contraption.

“And a rock saw isn’t even shown,” Neil Borenstein says, with a chuckle. The Toro marketing director concedes that the versatile trencher unit is a workaholic machine. “It is a little comical because the backhoe on the front doesn’t look like it belongs. But a lot of RT1200s go out the door with a backhoe on the front.” Other brands of large trenchers are similarly configured.

The odd-looking setup is very productive. When a trench is being sliced into the earth for miles on end or is being dug in remote areas unsuitable for operating three or four separate machines, the RT1200 with a backhoe on front is a versatile solution. “Once you open a trench, you need to fill it back up,” Borenstein says. “And sometimes you need a junction box. You are way out there trenching, you might as well dig the hole for the box before moving on. The backhoe is a good addition.”

Large trenchers have evolved into tool carriers. As applications have expanded from water, natural gas and electric lines to include fiber-optic and other telecom installations, trenching tools have evolved. Attached to them now besides standard trenching chains are micro-trenchers, cable and vibratory plows, rocksaws and reel carriers. And, yes, backhoes. “It is more or less a power unit now,” says Vermeer product manager Ed Savage. “That’s what customers want — more and more flexibility.” 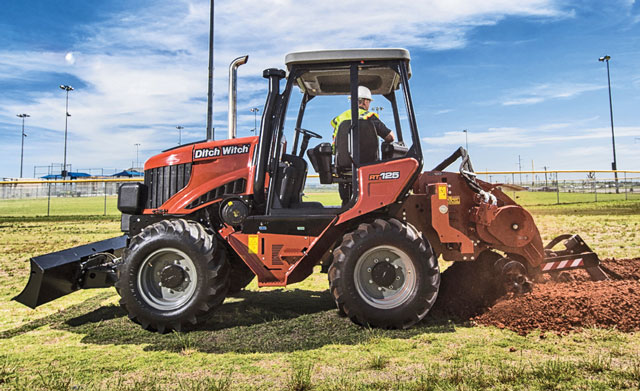 The Ditch Witch RT125 has tilt frames to keep the sides of trenches aligned and front-and-rear steering for a relatively tight turning radius despite its size.

The original “endless conveyor ditch-digging machine” introduced 70 years ago by Charlie’s Machine Shop in Oklahoma and called a “Ditch Witch” had a molded iron tractor seat on it for the operator. But many next-generation DW machines were walk-behind models. Today, trenchers with seated operator platforms are top-of-the-line machines. The Ditch Witch RT1200 can even enclose the operator in a heated and air-conditioned cab with front and rear windshield wipers and pressurization to insulate against noise and dust.

Ditch Witch’s first trencher was powered by a 7-hp engine and cost $750. By comparison, the Toro RT1200 has a 121-hp Cummins diesel under its hood. It carries almost 50 gal of fuel and moves on 18.5-in.-wide rubber tracks via a four-speed shift-on-the-fly hydrostatic transmission. The big trencher is, in other words, a sophisticated tractor unit and a world apart in technology — and price — from Ditch Witch’s progenitor machine.

Big is popular. Ditch Witch itself manufactures an equivalent 121-hp machine, the RT125 Quad, with a four-cylinder Deutz diesel Tier 4 Final engine. These large, mobile, digging machines feature tilt frames to keep the sides of trenches aligned with the vertical. They have front-and-rear steering for a relatively tight turning radius despite their size (an RT125 is a 7 1/2-ton machine, without attachments).

Vermeer’s competing big model is the RTX1250 with a Cummins engine that bumps up to 127 hp under load. Like some competitors, the RTX1250 can roll on tracks or tires, with end-users switching interchangeable axle hubs and mounting one or the other. Vermeer has an exclusively-steel-tracked, plow-only model, the XTS1250. With steel tracks on, the XTS1250 weighs more than 19,000 lbs. “The XTS is a market-driven addition to our line,” says Savage. “Customers wanted increased traction and productivity on the cross-country runs.”

These big trenchers are among the manufacturers’ best-sellers each year. In fact, Vermeer’s RTX1250 is its most popular seated model. “More and more projects need the quad tracks because it can operate more days out of the year despite conditions,” says Savage. “It’s a very productive machine and very operator friendly, which is significant given the labor shortage. It shortens the learning curve for operators.”

Yet Vermeer’s 74-hp trencher, the RTX750, also is a top-seller for the manufacturer. Ditch Witch’s most popular ride-on trencher is even smaller, the RT45. It is a 49-hp unit weighing just 3,200 lbs that has dominated the rental market for decades. A generation of DIYers grew up knowing only the RT45. “It’s the right size,” Thompson says of the popular trencher. “It is compact enough but powerful enough to get a job done.”

While the biggest trenchers indeed have grown large, they also have advanced in engineering. Crab steering gives larger models better maneuverability. Multi-position rear mounts let operators choose where to position their trenching bars or vibratory plows. Swivel seats with arm rest-mounted controls enhance line-of-sight operation. “When you’re trenching,” notes Toro’s Borenstein, “you are going forward but using an attachment behind you. An operator can swivel a little to see what he has done and swivel back to see where he’s going.”

During the last decade when multi-tiered emissions regulations were mandated, computer controls became pervasive on diesel engines. Their proliferation ushered in other technical changes. “When you put in those engines with computer-controlled emissions,” Borenstein says, “it opened up possibilities for controlling things differently.”

Things like a cruise control system on the Ditch Witch RT125 Quad that lets the trencher automatically slow or quicken its forward movement according to the resistance of the material it’s slicing through. Or Vermeer’s Auto Plunge system that regulates downward pressure on a chain bar when it’s being introduced to the ground, extending the life of the digging teeth, and its Trench Sense system that automatically reverses movement and its digging chain when the in-the-ground implement encounters a rock or root. “It takes the human interface and errors out of it,” is how Vermeer’s Savage describes automation.

Toro attacks unseen underground obstacles by combining old and new technology in a unique trenching drive system it calls HD PowerTrench. The system utilizes a flywheel that mechanically gives a chain more momentum, a torsion bar that absorbs the shock of striking unseen hazards and a set of planetary gears that adds torque to the hydrostatic drive. “It’s a little more expensive, so other manufacturers don’t use it,” Borenstein says. “And it separates us from the others. Once customers operate it, they really appreciate that power.”

Driverless operation has not arrived in trenchers, but remote-controlled units are becoming more common. Vermeer offers remote controls across the range of its machines. “We are getting more and more requests for remote control,” says Savage. “You can load or unload from a trailer without riding on the trencher, so safety is a factor. The other thing is, people like to see the entire trenching operation. With remote control, an operator can stand where he has room to see. Those two things make remote control very popular.”

So what’s coming next for ride-on trenchers? Mum’s the word from the product managers, though Thompson says he “won’t be surprised if there is something on the horizon that will take over the RT125.” Till then, he believes the “real differentiator among the competing models is dealer support. You can have the best product in the world, but if you don’t have the support to back it up…”

GILES LAMBERTSON IS A FREELANCE WRITER FOR COMPACT EQUIPMENT. 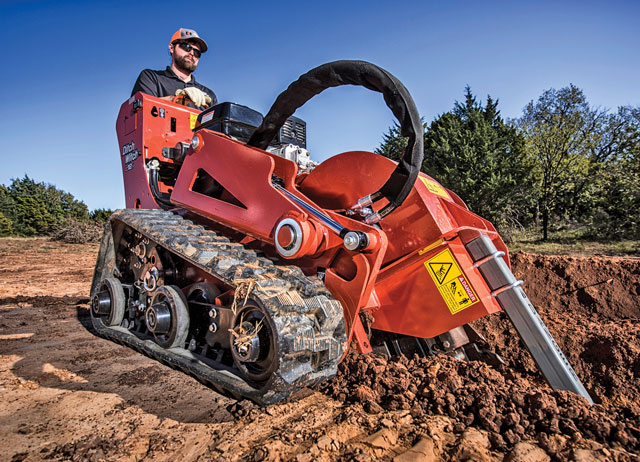 How many models of trencher/plows does a manufacturer really need to cover the market? After looking at three competing lineups, the answer is not obvious. Ditch Witch, which invented the industry, offers models ranging in engine size from 12 to 121 hp. It has seven walk-behind units, one stand-on unit, six seated-operator rubber-tired units, three seated quad-track models and a couple of micro machines. Vermeer’s lineup is slightly smaller. The manufacturer has just 11 models including “pedestrian” (walk-behind) and walk-beside units, rubber-tire and rubber-track models, a steel-track-only unit and a remote-controlled vibratory plow.

Toro’s showroom is less crowded, comparatively speaking. It offers three walk-behind trenchers, a rubber-tired riding trencher, a quad-track trencher and an articulated rubber-tired model dedicated to vibratory plowing — six in all. Chris Thompson, Ditch Witch compact equipment product manager, was asked if 19 models of trencher-plows verged on too many. “We try hard to cover the whole market, and that’s why we have the range,” he says. “The newest, the RT125, came from listening to the market and seeing what needs to be out there. Will we need a bigger one than the 125? We’re watching the market.”