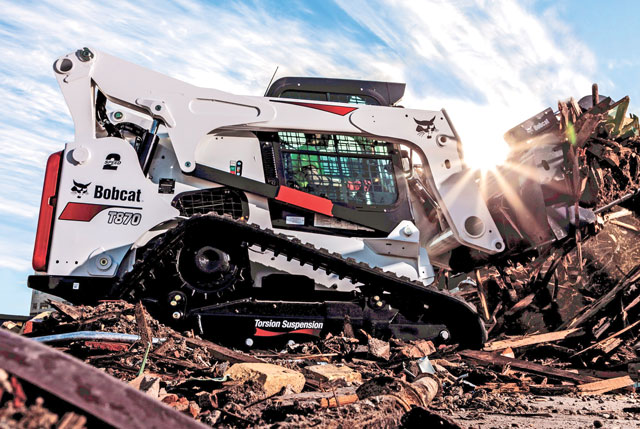 The biggest Bobcat loader, the T870, is a best-seller in the ag market, according to Eric Dahl, loader product specialist at Bobcat. “That surprises a lot of people, but there really is not another loader on the market that can fill this niche very easily.” Good for demo work too.

Bigger is, well, bigger, but it can be better, too. “Big” compact track loaders are still compact compared to many other machines in the equipment yard, but the super-sized models are proving a better fit for some construction and landscape tasks.

“The bigger track loaders are best in high hydraulic capacity applications,” says Jim DiBiagio, chief operating officer for ASV, the Minnesota manufacturer of compact track loaders and skid steers. “On the construction side, they’re used in land clearing, raking, digging foundations — anywhere a contractor needs a lot of hydraulic flow and runs the machine for hours on end.”

The manufacturer’s largest track loader is the RT-120, a 5 1/2-ton, 120-hp Cummins diesel-powered machine that can pump 45 gpm of hydraulic fluid and zip along at 10 mph. A special version, the RT-120F, is purpose-built for end-users taking down trees and creating fire breaks. The Forestry model weighs a half-ton more because of reinforced protective framing for harsh, overgrown work environments.

The biggest Bobcat loader, the T870, is a best-seller in the ag market, according to Eric Dahl, loader product specialist at Bobcat.

“That surprises a lot of people, but there really is not another loader on the market that can fill this niche very easily,” he says. “Customers move a lot of bales and materials with the 870.”

The 100-hp unit features a five-link torsion suspension undercarriage not found on smaller Bobcat models. The system is said to lessen vibration, dampen sound and reduce the rocking motion common during lift and extension work phases.

“When the grade varies,” Dahl says, “a loader tends to dive on you. But this system is more independent and doesn’t rock as much on rough ground. It’s something we are pretty excited about.”

These bulked up compact track loaders have begun to do the work of small dozers. This encroachment on the traditional turf of crawler dozers might be especially sensitive for Caterpillar, a manufacturer that has built a bulldozer or two through the years. But Kevin Coleman, Cat product application specialist, says important distinctions remain between the products. 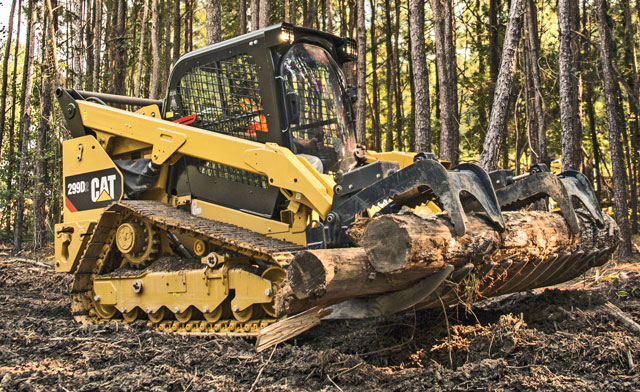 In big track loader sizes, Cat and Bobcat offer only vertical lift; company representatives say radial is just not demanded by their customers.

“Because of its size, width and weight, a small dozer shines in applications where more aggressive below-grade excavation is needed,” he says. Whereas compact track loaders can do so much more than blade dirt. “The Cat compact track loaders are some of the most versatile pieces of equipment on the market. Besides grading, they can also power trenchers, brooms, grapples, cold planers and mulching heads.”

Lee Padgett, a product specialist at Takeuchi, puts it simply: “These compact track loaders can be used in some places for some applications now done by dozers, but they are not dozers.” Takeuchi’s entry in the large compact track loader category is the TL12. At 110 hp, it is almost as powerful as the big ASV loader and its auxiliary hydraulic flow is comparable at 40 gpm. Unlike most of its competitors, however, the machine is offered in either radial (TL12R2) or vertical (TL12V2) lift configurations.

Radial arm loaders are deemed best for excavation and grading, and vertical lift excels in material handling, though each design can do both after a fashion. Cat and Bobcat offer only vertical lift; company representatives say radial is just not demanded by their customers. On the other hand, ASV offers only radial units for its larger loaders because vertical is not demanded in its bigger sizes. Takeuchi, meanwhile, sells radial and vertical units, just recently introducing a vertical model. “Both are popular,” Padgett says. “It’s all based on application, on what you need a machine for.”

Another distinction among the competing units is in tracks. Only Caterpillar offers steel tracks for its loaders. Both ASV and Bobcat used to offer steel tracks as an option, but retreated from steel because most customers preferred to run on and across paved roadways, which they can do with rubber tracks without damaging the road surface. Furthermore, track replacement is a big-ticket item when tracks are made of steel, so replacement costs are higher.

Padgett says Takeuchi customers seldom query about putting steel tracks on their machines, so the company is not considering it. But Cat offers steel tracks for both its 299D2 and 299D2 XHP models, as well as two tread patterns for rubber tracks. “Steel tracks offer a solution for customers that require improved traction due to working on slopes or in challenging underfoot conditions that contain high concentrations of protruding objects such as boulders, stumps and demolition debris,” says Coleman.

Basically, any work site where the ground being traveled by a loader can damage or accelerate wear on rubber tracks is a good place to be riding on steel. Replacing rubber tracks is not cheap either.

Different manufacturers approach emissions controls on these diesel-powered units differently, offering various solutions using fluids and filters, regen and no regen, and so on. End-users seem to have accepted the whole Tier 4 regime as a cost of doing business. “People are getting used to it. If you run a machine correctly, you don’t have a lot of issues. Everyone has the same requirements,” says Padgett.

With the exceptions mentioned above, the larger track loaders are, generally speaking, indistinguishable from smaller units in a manufacturer’s lineup. That is, the cabs are of similar design and finish, the proprietary features in one model run throughout the lineup. Mostly the difference between small- and mid-sized track loaders and the bigger models is in horsepower and resulting hydraulic and workload capacities. 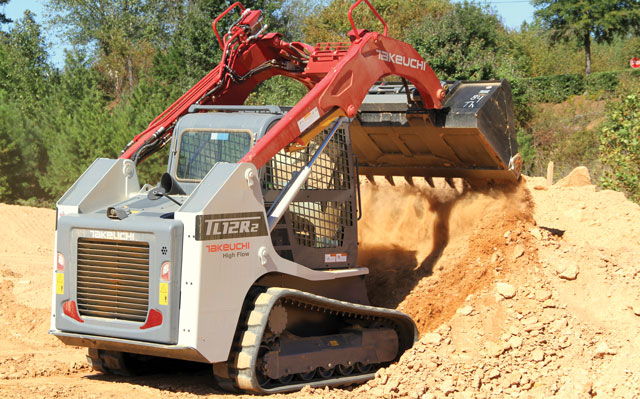 Contractors and other end-users are buying the largest of the compact track loaders because they have large jobs (big bales of hay) or have need of greater productivity, that is, higher lifts and heavier loads. They are utilizing attachments such as cold planers and mulching heads that require the big units’ high-pressure, high-flow hydraulic systems. They are moving enough dirt in landscaping or site preparation tasks that while employing a small bulldozer is a conceivable option, buying a large track loader is the more versatile solution.

But how big can compact track loaders become without morphing into another machine? Asked if a 200-hp track loader is a possibility, manufacturer reps hem and haw. “It’s hard to say where manufacturers are going to go,” says Bobcat’s Dahl. “It won’t go to 200 hp in the near future certainly. At some point, size becomes too large, and you aren’t going to be able to use it.”

“I would never say never,” says Bill Wake, director of product development at ASV, “but 200 hp seems pretty big.” He noted that track loaders of that size definitely could spell the end of small dozers. DiBiagio, his colleague at ASV, added that the company always is “toying with new ideas” such as new applications and alternative fuels. “But the next big thing is probably going to come on the attachment side.”

Coleman at Caterpillar believes customers will dictate size. “It wasn’t that long ago that very few envisioned compact track loaders of the size and horsepower that are available today. I’m not sure we’ll get to 200 hp, but customers are always looking for larger models with higher rated operating capacities. If customers demand a higher horsepower solution in a so-called compact machine, I’m sure manufacturers will find a way to fill the need.”

Dealers can provide valuable advice and guidance on choosing the right track for your machine.

Buying a New Set of Tracks

The normal wear and tear on your compact track loader’s tread or inside rolling path of your track has become evident. Time to replace it. Where do you begin? Applications are so diverse it’s difficult to find a one-track solution. Find the right track that responds to the surface types you’re working on —  from lighter applications such as dirt, sand, gravel and asphalt to heavier ones such as concrete, rocks and debris. The frequency with which your machine will be used is also a critical factor. If you anticipate a high usage frequency, you need a high-performance track. Consider the terms of the manufacturer’s warranty as your protection against defects in materials and workmanship. If you have experience, a track can be switched out with the use of minimal tools in just about an hour. If you’ve never done it before, seek out the help of an experienced mechanic or dealership. Remember to always put new sprockets with new tracks, ensure proper tension and keep the undercarriage clean and in good working condition.