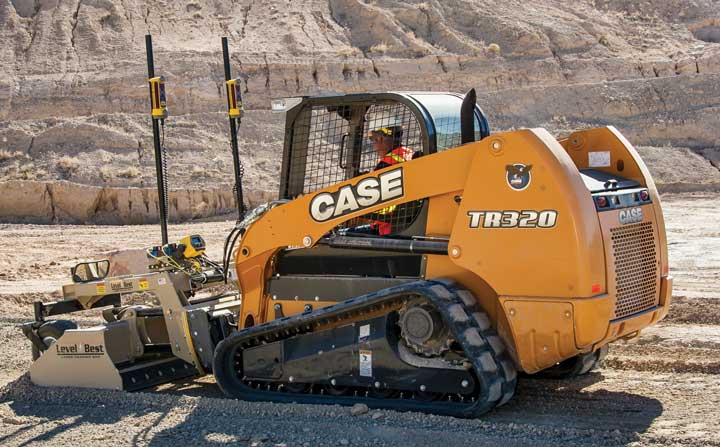 The human eye is a magical thing, but when it comes to leveling dirt for an athletic field or a basement subgrade, eyeballing loses much of its magic. For such exact purposes were machine control grading systems developed. Coupled to a track loader, the systems have removed the guesswork from small leveling jobs. The question is how much a contractor must invest to regularly deliver a precision leveled plane instead of a squint-eyed, more-or-less-level surface. Answer: tens of thousands of dollars. The good news is that today’s quickening pace of construction means a contractor can recoup such an investment sooner rather than later.

A skid steer or, ideally, a track loader is the machine of choice for these small grading jobs. The compact machines are proving their mettle as graders. So, if a track loader is not already in the equipment yard, the cost of machine control for a contractor begins with procuring a machine — $40,000 to $80,000 — but there are plenty of trade-in late generation track loaders on dealer lots for sale or lease (many at half the price of above).

The real decision for a contractor becomes how best to upfit a track loader and blade with a control system. Several types of machine control systems are on the market. Choosing among them is a matter of evaluating jobs and cost. That is, what precision work is envisioned and how sophisticated (costly) a system is required to do the work?

Please note that track loader grading systems are not bulldozers. They are neither heavy enough nor rugged enough to be digging into firmament, that is, the foundational soils on a jobsite. In fact, grading by track loaders might more accurately be called spreading. The machines are well-engineered to spread top soil or stone or other aggregate that has been dumped for smoothing. They are less suited for gouging out virgin soil, which should be left to heavier machinery.

The entry level system for machine control grading employs laser beams, which have been around for half a century and are found in everything from barcode-reading devices to data-streaming systems. For fixing a grade, the monochromatic laser beams are transmitted in a 360-degree broadcast from a stationary platform on the jobsite. Receivers on a machine-controlled blade take their cue from the beam to steadily maintain the elevation of a blade. 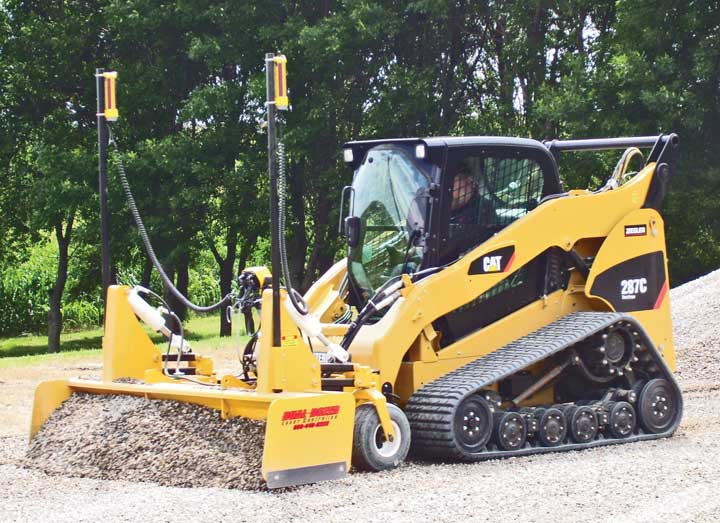 The pathway to 3D is smoothed somewhat by the fact that track loader blades employing lasers are easily upgraded to more complex systems.

Besides being the least expensive grading system, the laser method has the additional virtue of being the most accurate. “That is correct,” says Jon McKendry, senior product manager at Trimble, a leading positioning technology firm. “GPS is not as accurate as laser, but neither is it the same as it was 10 years ago.” Laser units can routinely produce a surface within a quarter inch of uniformity, but McKendry says a precision option now available for 3D positioning units can true a surface to within 2 or 3 mm.

A contractor opting to use a laser transmitter also has options on the receiving end of the beam. A blade can be operated with one mast (the upright stand holding the laser receiver) or two. If the leveling work is rudimentary — say, spreading gravel on a restaurant parking lot with a box blade — a one-mast system probably is sufficient. On the other hand, if a subsurface is being fine-tuned for a baseball diamond, two masts is the better choice.

The main difference is how the blade is lifted. Having a single receiver on a mast will raise or lower the entire grading blade, even if just one end of the blade is too low or high. That can produce more irregularity in the finished surface. A two-mast system raises or lowers each end of the blade as needed, producing more gradual transitions and a more uniform surface. Multiple sensors also can be affixed to track the angle or rotation of a blade.

In addition, if a contractor plans to grade surfaces next to curbing, a sonic system is a good add-on. A sonic tracker is affixed to the end of a blade nearest a finished curb and uses sound impulses to keep the blade end at a fixed level below the curb reference point. This ensures a full depth of pavement can be laid next to the curb.

“Sonic sensors are integrated with paving solutions,” says McKendry. “A smaller contractor uses them to do a parking lot, or maybe to work an area next to a foundation. Sometimes the contractor will tie back into a laser on one end of the blade and use the sonic on the other end, a sonic-laser combination.”

Laser 2D projects typically include parking lot prep, smoothing a basement subgrade, preparing pathways and sidewalks, developing or reworking sports fields and similar work. All involve flat planes or slopes that essentially are unchanging from end to end. Contractors who anticipate more complex grading work — that is, finished surfaces with contours and complicated slopes — probably will need to fork over extra money for a 3D machine control system.

The pathway to 3D is smoothed somewhat by the fact that track loader blades employing a laser system are easily upgraded to more complex systems. Therefore, a beginning contractor can move into GPS as a business develops. “Most customers go with entry-level systems,” says Chad Mohns, vice president of HitchDoc. “Down the road a year or so, they upgrade. Probably 80 percent of sales are for entry-level laser applications, but some go with GPS right off.”

To upgrade, a HitchDoc blade is plugged into Trimble, Topcon or Leica Geosystem hardware and software for satellite connections. McKendry notes that “over the last couple of years, a growing number of customers are using both laser and GPS solutions. It is easier now to go back and forth between 2D and 3D systems.”

But costs of 2D and 3D systems are still widely divergent. The cost between an entry level laser system and a top-of-the-line GPS can be as much as $50,000. McKendry says Trimble is trying to close the gap. “We have tried to make 3D a lot cheaper so people can experience it at a lower price point — for about $25,000.” To that end, the company has, for example, introduced repeaters more suitable for compact equipment. “We can really get pretty high performance for about half the cost.”

The rest is up to operators. Laser systems come with control boxes that allow the person in the driver’s seat to switch from manual to machine control. This recognizes that operators sometimes need to employ the blade without outside interference. On the other hand, operator interference can be a problem, too.

“The most common mistake beginners make is trying to help the system,” McKendry says. “They want to help by manually lifting the blade a little here or there, but that only destabilizes the platform. It is best to let the machine control grading attachment do the work for you.”

At CONEXPO-CON/AGG in March, Topcon Positioning Group announced an update to its entry-level machine control system for excavation — the X-52. The 2D system is designed to offer cost-effective indicate grade control. The X-52 system features the all-new MC-X1 controller, which offers compatibility with all brands and models of excavators. Operators with limited exposure to machine control systems will find the system intuitive and very easy to use. Its reliable and rugged TS-i3 tilt sensors detect the precise positioning of the boom, stick and bucket at all times. The system is designed to provide a forward-thinking investment for contractors who want to enhance their capabilities in the future. Later this year the X-52 will be upgradeable to a full 3D system, which allows it to expand along with business needs. The system is designed to pair with the GX-55 touchscreen control box to offer sunlight-readable indicate grade reference in any climate condition. For more info, visit topconpositioning.com.