With newly-minted Compact Equipment associate publisher Keith Gribbins out on assignment this intrepid assistant editor was afforded the opportunity to visit the JLG Industries world headquarters in McConnellsburg, Pa., in October. The two-day media event served two purposes: 1) it brought about 30 members of the media from the United States and Canada to McConnellsburg for a plant tour and hands-on training, and 2) it unveiled the newly expanded JLG Ground Support training center and the JLG virtual training program.

Let’s start at the beginning. JLG co-founder John L. Grove started the company in McConnellsburg 45 years ago and built his first chain-driven aerial work platform in 1970. Like many an automobile manufacturer, that unit was sold but JLG later bought it back, and it greets visitors to the nearly-spotless manufacturing facility. 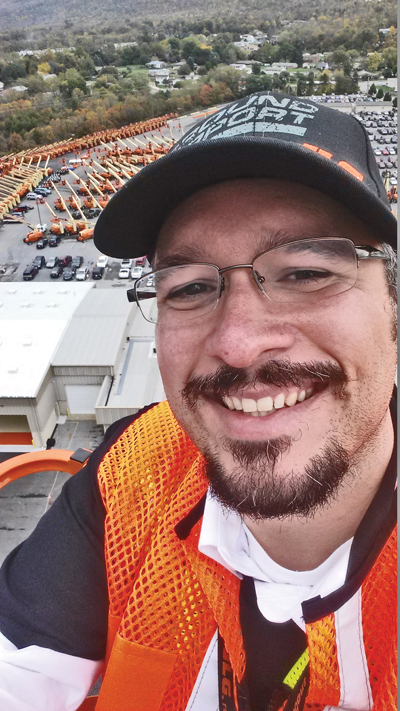 I don’t always do selfies, but when I do, I prefer to do them at 185 ft. The view of McConnellsburg and the surrounding area was breathtaking. On one side you could see a storm rolling in.

For Compact Equipment purposes, the highlight of this tour was seeing the JLG and Caterpillar telehandlers in various states of construction. The facility produces the JLG G Series 6,000-, 9,000-, 10,000- and 12,000-lb telehandlers and the Caterpillar TL Series of the same class.

JLG is noted for being on the cutting edge of the lift and access equipment industry and nowhere was this more evident than the JLG specific boom tube welding machines, which welds both the inside and the outside of the booms at the same time. The sheet metal comes in as four specific sheets, is placed in the machine and, under the watchful eye of a JLG employee, the welder does its work. The first unit was installed in 1973, welder No. 2 was installed in 1990 and there were nine total by 2014. The latest edition is specific to the gargantuan JLG 1850SJ Ultra Boom Lift.

As informative as the tour was, the highlight of the trip was the training center visit on day two, which included hands-on experience with JLG’s equipment, including the 800S telescopic boom lift and the JLG G6-42A telehandlers, with the help of trained and certified JLG employees. It marked the official media unveiling of the 17,000-sq-ft training facility, which quadruples the size of the original facility.

This state-of-the-art building features 7,000 sq ft of classroom, dining and office space and 10,000 sq ft of service bay area, with tall ceilings to accommodate the JLG product lines. The $2.5-million expansion was complete in August and the first classes have already graduated. In all, JLG trains about 4,000 people a year. In 2014 they have already trained 2,000 in the classroom and 1,800 via e-learning opportunities.

“This facility is a testament to safety,” Richard “Rick” Smith, senior director of product training for JLG Industries, told the assembled media. Smith is responsible for all aspects of JLG training from program development and curricula design to management of all JLG’s U.S. training facilities.

Like a parent showing off their newborn child, Smith gave us a tour of the facility and laid out the groundwork for our hands-on activities including a competition he devised that separated the media into three distinct teams. Unfortunately, team Black Attack finished second, but we all learned valuable lessons about JLG’s access equipment.

“Whether it’s classes for equipment operators or service technicians, or our Train-the-Trainer program, this new facility will make it easier for students to learn because they’ll have more multimedia resources, more equipment, more space and more comfort,” Smith said in a press release. “The proving grounds give students in operator training a chance to take what they’ve learned in the classroom and apply it in a setting that duplicates many of the scenarios they’re likely to encounter on the job.” 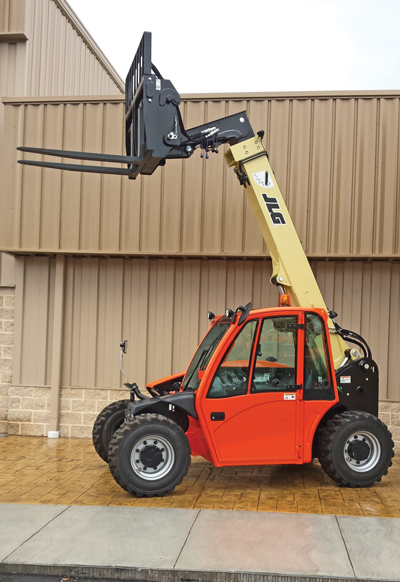 The new training facility also featured a hands-on demonstration of JLG’s lift and access equipment simulator. Those familiar with computer and gaming consoles will feel right at home familiarizing themselves with the controls and operation of the JLG 800S telescopic boom lift. It offers three training sessions, including controls familiarization and two operation scenarios. The JLG G10-55A telehandler is also available.

“Everything is to scale, and the module offers two views: one from the operator’s perspective and a second external side view of the equipment,” Smith said. “The simulator helps reduce the learning curve when a user first operates a piece of JLG equipment, as it replicates working with an actual machine on an actual jobsite.”

The scenarios take the operator and equipment on to the 4-acre proving grounds and the action of this simulation software is spot-on — think “Gran Turismo 6” or “Forza Motorsport 5” — but with heavy machinery. The equipment simulator is one part of JLG’s training offerings at McConnellsburg, which also includes e-learning and “Train-the-Trainer” programs. Users registered with JLG University can also access the equipment simulator remotely via personal computer and, by the end of 2014, using an iPad.

Mike Kezdi is a contributing editor to Compact Equipment, based in Brecksville, Ohio.