It’s difficult to imagine walking into an equipment dealership or onto a construction site and not finding an industry staple like the portable air compressor. The history of pneumatic power dates back to the 19th century, and the popularity of compressors and air-powered tools such as hand-held breakers suggests pneumatics won’t be leaving us anytime soon. 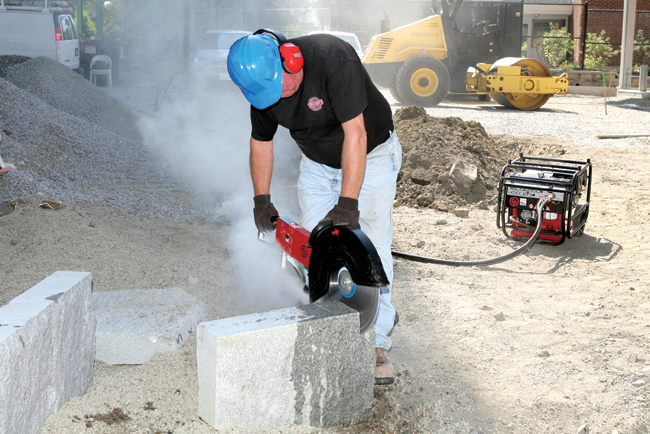 But that’s not to say that contractors don’t have alternatives. An electric tool is generally a safer option for interior projects, and gas-powered equipment allows for more freedom of movement to increase efficiency in remote work locations. But both electric- and gas-powered equipment are better suited to their specialties, with neither being able to match the overall performance of pneumatics in most applications. Therefore, it’s hard to consider either a true alternative.

To discover a real contender, contractors need look no further than other equipment commonly found on their jobsites — specifically those units operated by hydraulic power. While it’s basically a given that a majority of workers are using pneumatic breakers for handheld applications, some jobs require more breaking force. In such cases, a common and effective solution is a rig-mounted breaker. A breaker attachment of this sort is usually powered (or at least assisted) by the hydraulics of the skid steer loader, backhoe or excavator to which it is mounted.

The use of hydraulic power for attachments like breakers is universally accepted, so it shouldn’t seem like a drastic leap for hydraulics to become a popular power source for hand-held equipment. However, even though hydraulic hand-held equipment has been around for more than three decades, pneumatics are preferred and used far more — by approximately a six-to-one margin over hydraulics. And some believe even that ratio is overestimating the penetration of hydraulics into the handheld equipment market.

While reliability and performance certainly factor into equipment selection for contractors, cost can play a heavy role as well. When comparing the initial purchase price of an air compressor to that of a hydraulic power pack, there really is no comparison. Power packs are much less expensive — in many cases less than half the price of a comparably performing air compressor. This purchase price differential alone allows the initial investment to be paid off more quickly. It also immediately frees up additional money for a contractor to add more equipment to his fleet, such as a second power pack or a few hand-held breakers.

Along with a higher price tag, air compressors tend to carry other associated costs that are not incurred by power packs. One such cost is license plate registration, which is generally required for towable air compressors but not for a hydraulic power pack. This type of cost may be small, but is the type that is often overlooked when calculating the total cost of owning equipment.

In addition to costing less, hydraulic power packs are far more compact than air compressors, giving contractors an added element of convenience. Power packs can be picked up and placed in the back of a truck or van, while comparable air compressors must be towed behind or mounted on a vehicle. Once on the jobsite, power packs can be manually wheeled or lifted into any necessary position, while compressors usually require mechanical assistance to be moved from one location to another — and still could be limited in where they can physically go.

Not all contractors will see a need for a smaller, more convenient package, but most should have an interest in the performance advantages a hydraulic power pack can provide. Hydraulics simply work more efficiently than pneumatics, which helps to explain how a 13-hp power pack can match the performance of a 60-hp air compressor. Compressed air has an efficiency of about 18 to 25 percent, while hydraulic efficiency is roughly 50 to 60 percent. This makes sense when considering the basics of each system.

What the more efficient hydraulic system means for a contractor in practical terms is a higher power-to-weight ratio. For example, a 40-lb hydraulic breaker usually will deliver at least the same blow energy as a 50-lb pneumatic breaker. This higher performance allows a contractor to complete more work in less time. In some cases, this is an added luxury that allows a contractor to get on to the next task or the next job. In deadline situations, it could be a critical factor in completing work on time.

In addition to accomplishing a task faster, hydraulics can also contribute to decreased downtime. Grease is a dirty word to many, not because of its grimy connotations, but because contractors are all too familiar with the work stoppages necessary to ensure that equipment is properly greased or lubricated at various intervals and the consequences of neglecting this necessary task. 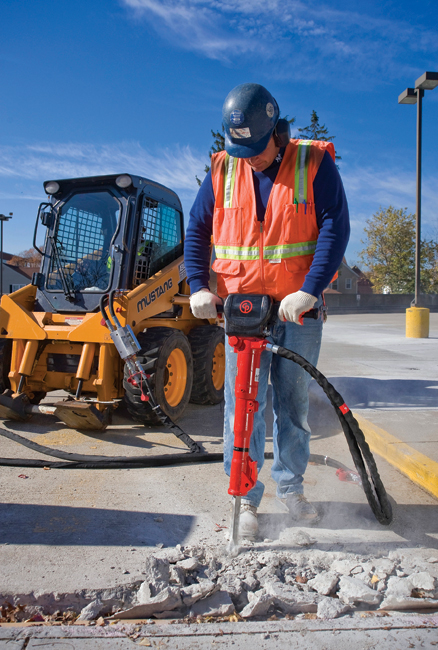 Fortunately for the operator of a handheld hydraulic breaker, the hydraulic oil providing the power is also supplying constant lubrication during operation, taking the task of greasing out of the operator’s hands. A similar pneumatic tool would need to be regularly oiled during use. Not only does this difference maximize uptime, but it also minimizes the risk of equipment being unnecessarily damaged due to inadequate lubrication.

Hydraulics also reduce downtime on jobs during the winter. While the oil powering hydraulic tools will quickly warm to working temperature, condensation on pneumatic tools can sometimes cause the exhaust ports to freeze up in cold weather, if some sort of antifreeze is not used.

Hydraulic tools also have the flexibility to be powered by other machines in situations where a power pack isn’t available. In such a case the operator could connect the tool to another hydraulic power source, such as a tractor or backhoe loader. Power packs are more convenient because they are already rated to the proper oil flow and pressure to match the tool they are powering, but an oil flow divider could be used to regulate pressure and flow for powering a tool with a backhoe. This could come in handy in many situations, such as if a contractor owned just one power pack but wanted to run breakers in two different areas of a jobsite. The power pack could be used in one spot while the backhoe supplies hydraulic flow to a breaker in a second location.

Hydraulics also provide benefits for interior or confined space work. Pneumatics are not a good choice under either of these circumstances, due to the exhaust ports on air-powered tools creating both dust and noise pollution. With hydraulics working in a closed circuit, exhaust fumes and sound are kept to a minimum, making work conditions much safer.

While hydraulic tools are generally friendlier from an operator’s perspective, they are also environmentally friendly. Fuel consumption is drastically lower on a hydraulic power pack compared with an air compressor, which has more cylinders and requires higher horsepower to produce sufficient air to operate pneumatic tools. In some cases, air compressors will use up to eight times as much fuel as comparable hydraulic power packs, which affects the financial side of a contractor’s operation in addition to the environmental aspect of the job.

Eudes Defoe is the product manager for CP handheld and light compaction at Chicago Pneumatic Construction Equipment, based in Independence, Ohio.