A Skid Steer for All Seasons

Being a landscaper in Wisconsin requires flexibility … and a bit of grit. A true four seasons state, Wisconsin landscapers must diversify in order to remain profitable year-round. For Aron Rodman, owner and founder of Extra Mile Landscape in West Bend, Wis., there may be no more important piece of equipment in allowing him to do this than his skid steer. Extra Mile started as a small installation company, transitioned to hardscapes and eventually become one of the largest snow removal contractors in southeastern Wisconsin. Skid steers have helped trace the evolution of the company.

Rodman’s business philosophy is reflected in his company’s name. Now in his 12th year of business, Rodman truly goes the “extra mile” to give his customers extraordinary value. That attention to service has helped grow his business. Rodman claims that 90 to 95 percent of his new business comes from referrals from satisfied customers.

“As the economy changes, we’ve found the skid steer loader is more and more important,” Rodman explains. “One skilled operator can use it for just about anything — putting new lawns in during the spring, mulching garden beds, drilling holes for trees, tree spades and brush cutting in the fall. Come winter, we rely on skid steer loaders for plowing snow and loading it into trucks. I can move more snow in eight hours with a skid steer loader than I can in 20 hours with a truck. There’s no need to back up or make Y-turns. We just run circles around the competition. We not only work faster at each site, but we can quickly drive from site to site without a trailer.” 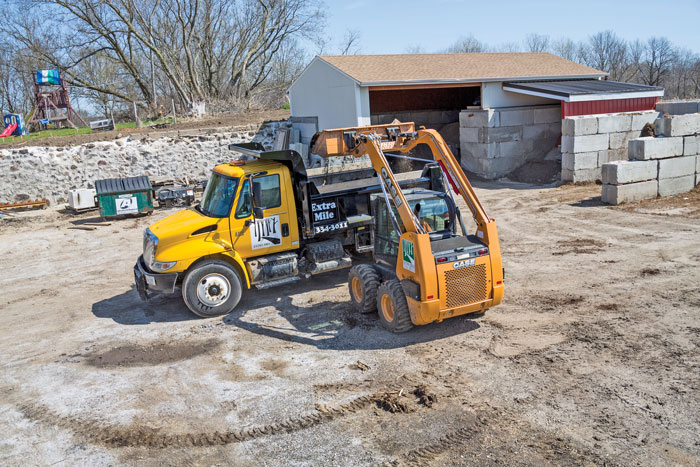 Aron Rodman and Extra Mile Landscape are dedicated to going the “extra mile” to serve customers, whatever the season.

As electro-hydraulic controls were introduced to the industry and began replacing mechanical linkage, Rodman added a new skid steer to his fleet from a leading manufacturer. After some time, he and his operators had concerns over the sensitivity and responsiveness of the controls.

“With the competitor’s model, there was just such a loss of sensitivity with the electro-hydraulic controls on their product,” Rodman says. “We would drive up to where I had an operator, I would stop and it would coast forward a couple more [feet]. We felt that was dangerous. I need to be able to stop immediately, and we were having trouble with a competitor’s model.”

“We had a salesman [Miller-Bradford & Risberg] who’s been stopping by our shop for about six years and finally stopped by on the right day. I told him about the problems we were having. He brought one [of the Case skid steers] up. He let us test it for about a week, and we found we weren’t experiencing those same problems. They were more comfortable. They were more sensitive. We purchased the machine and ran it for the winter and had no problems whatsoever. It did its job for us. The following fall, going into the next winter, we ended up purchasing two more.”

Electro-hydraulic controls use electronics and hydraulics to control machine function and allow for new and more intuitive ways to dial in skid steer performance to the preference of the operator. For example, an operator can slow down the responsiveness of the curl on the bucket and lift of the arms without slowing down every other function. Case skid steers come with nine pre-set settings as part of its EZ-EH control setup.

“With the Case system,” Rodman says. “We’re able to maximize the speed, agility and responsiveness of the tires, yet slow down the curl, which means we can drop the plows more gently, without the slamming and jarring we had with other loaders. With competitor’s models, we found that the only way to slow down the curl and the bucket speed sometimes is to slow down everything — the turning, the acceleration.”

EZ-EH controls also allow more flexibility in the summer. Depending on the application, hydraulic flow can be increased for the attachment, such as a brush cutter, while slowing down the flow to the drive system for lower operating speeds. Rodman also likes the ability to adapt controls to each operator. “We can make it less sensitive for new operators who are just learning on the job and speed it up for our experienced guys to maximize productivity. “

Better Visibility All Around

“Radial lifting gives us a better view all around, especially behind us. Since we don’t load that many quad-axle trucks, the extra visibility with radial lift outweighs the extra height we’d get with a vertical-lift machine,” Rodman adds. “We don’t have fenders blocking my visibility, looking down to the ground, in front of me, in front of my knees. I’ve got glass going almost all the way down to my feet. I can see the load I’m picking up. I can see about 1 ft in front of the tires. Looking back, the downward curve lets me see objects closer to the machine; and looking above me, the windows curve upward towards the top. It’s just all around a wonderfully visible machine.”

Plowing snow means working in the dark most of the time. Rodman appreciates the additional visibility from the standard side lighting. “I never thought a light bulb would steer me to buy a machine,” Rodman laughed. “But our operator on the first machine we purchased couldn’t stop talking about it. To be able to see 30 ft to the left and right as well as straight ahead and behind is critical. I would not have a loader without it. We didn’t realize what we’re missing until we got it.”

Skid steer loaders today can be outfitted with connect-under-pressure hydraulic systems. This means the operator can disconnect hydraulic lines by bleeding the pressure off at the fitting rather than dumping the pressure from the cab.

Rodman says, “This is a real time saver in winter and summer. It’s also a knuckle saver, and we’re not ruining fittings by tapping them with a hammer to loosen them.”

Dan Brunner, shop foreman, helps keep Extra Mile machines in top working condition. “I like the forward-tilting cab on the skid steer,” Brunner says. “Everything is easy to access — oil filters, hydraulic filters, air filters, hydraulic lines and couplings. I would say that the Case Alpha Series is the simplest of all the skid steer loaders I’ve worked on.”

Rodman is dedicated to going the “extra mile” to serve his customers whatever the season. He’s found the right skid steer loaders to help him do that. “The real difference between machines is not always on paper,” he concludes. “With our skid steer loaders we get all the power and lift capacity we need, plus the electro-hydraulic controls, visibility, comfort and easy serviceability. You have to use one to really appreciate the advantages.”

Warren Anderson is a brand marketing manager with Case Construction Equipment, based in Racine, Wis.