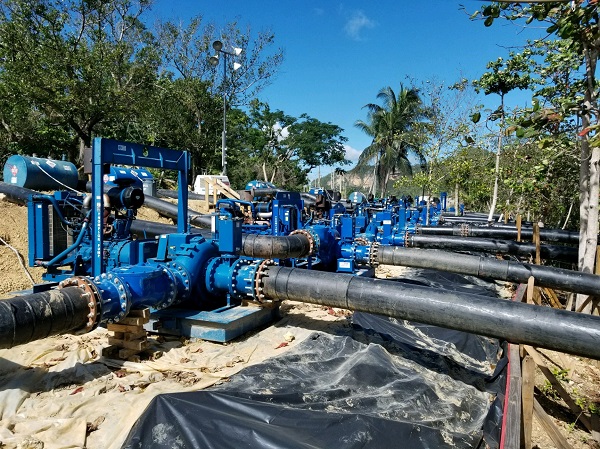 More than five months after Hurricane Maria decimated Puerto Rico, local company Thompson Pump and its workers are still on the island helping citizens recover from the aftermath of the worst storm in the country’s history. Thompson Pump’s tireless efforts helped save an entire community from a potentially catastrophic flood and provided safe drinking water to more than 200,000 citizens.

Hurricane Maria’s sustained winds of more than 150 mph and 30-plus in. of rain left behind a shocking path of destruction. In the immediate aftermath of the storm, Thompson Pump was among the companies contacted to place bids on a relief contract from the United States Army Corps of Engineers. Thompson subsequently was given the go-ahead by the government agency and immediately mobilized a team of workers, traveling to Puerto Rico to formulate a strategy to help save a large community of residents living downstream from the Guajataca Dam.

When the dam’s spillway failed, it caused an outpouring of water resulting in major erosion that necessitated the evacuation of 70,000 area homes. During and immediately after the storm, there was a real fear they could lose the dam entirely.

“We were going into a situation with a lot of unknowns. We hadn’t seen the jobsite yet, other than in photos from the Corp and satellite images. The area was remote, with no cellphone coverage and few supplies available. We planned to be one hundred percent self-sufficient, to the point that we were prepared to camp at the site,” said Bobby Zitzka, National Sales Manager for Thompson Pump. “Because of the experience of the team, we were confident we’d be able to overcome any obstacles.”

In less than 24 hours, a team of 13 Thompson Pump workers were on the ground in Puerto Rico. All told, 35 Thompson staff members have been in the area at least once during the crisis.

“The selflessness of our people has been remarkable,” said Chris Thompson, President of Thompson Pump. “The number of our employees who volunteered to put their own lives on hold to help the people of Puerto Rico is outstanding. I’m really proud of the way our team came together to accomplish this challenging project.”

Ten complete systems consisting of 18” pumps, suction and discharge lines, and elbows and fittings were needed to provide relief. The process of staging this equipment and delivering it to the jobsite was an arduous one. Ultimately, due to the volume of equipment necessary to complete the job (approximately 25 truckloads of equipment and supplies, including fusion trailers, skid steers and service trucks), the decision was made that two systems would be flown over to expedite the implementation, while the rest would arrive by barge.

As Thompson Pump began the job of lowering the dam’s water level, thus alleviating the possibility of major flooding, the U.S. Army Corps of Engineers realized Thompson’s workers and equipment could be utilized for yet another vital purpose — providing drinking water for almost a quarter of a million people desperate for it.

Within days of the equipment’s arrival in Puerto Rico, the first two pumps were used to reroute water from the Guajataca lake reservoir to a canal feeding three water treatment plants. The remaining eight pumps were deployed in a similar manner shortly thereafter, allowing clean water for the community’s citizens for the first time in weeks.

Thompson Pump is still providing an integral role in the recovery process. Their pumps continue to operate non-stop. Workers continue to be on the ground providing ongoing maintenance and around-the-clock pump operation assistance. Their working agreement was recently extended by the US Government, assuring Thompson Pump’s presence in Puerto Rico for at least six more months.