Allmand Allmand Bros Back 9 Night-Lite Golf Fundraiser by CE | on September 9, 2014 | 0 comments | in Light Towers | Like it 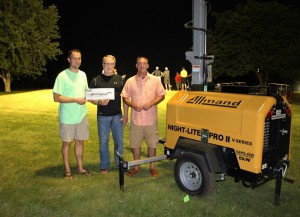 Golfing at night is no problem if you’re playing under 63 Allmand light towers. That’s what it took for 200 duffers to play the night away Aug. 15 and 16 at the Holdrege Country Club.

This was the second year Allmand hosted the Back 9 Night-Lite Golf Fundraiser tournaments in Holdrege, Nebraska. The proceeds of the tournaments benefited Tiny Hands International and Give2Grow Phelps County.

With the help of many generous participants and sponsors including CAT Power and Bosselman Energy, the tournaments raised a combined total of $21,577.60.

The Lincoln, Nebraska-based organization is committed to finding the greatest injustices in the world and working toward bringing relief to those living under its oppression – especially orphans, street children, and the victims of sex trafficking in Nepal, Bangladesh, and India. 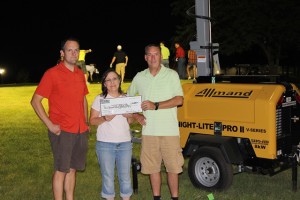 The non-profit organization, sponsored by the Phelps County Community Foundation and a host of generous match partners, supports and grows the non-profits that provide valuable services in Phelps County.

Give2Grow happens in November and for twenty-four hours, people, organizations, and business can donate funds, which are then distributed to participating local non-profit organizations.