AEM Association of Equipment Manufacturers CONEXPO-CON/AGG coronavirus COVID-19 home by Keith Gribbins | on March 16, 2020 | 0 comments | in covid-19 | Like it 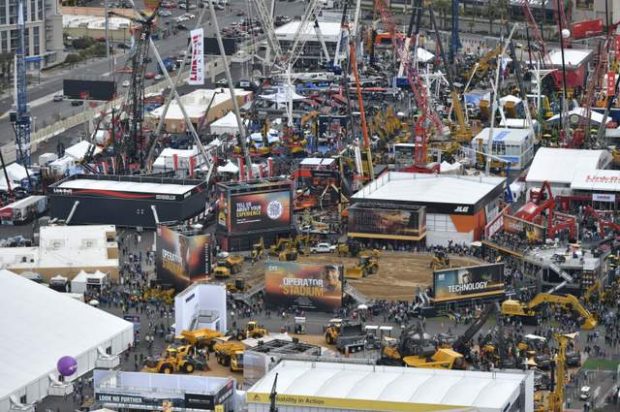 Compact Equipment covered CONEXPO-CON/AGG from the ground last week. Would you expect any less? It was a great show in part because of the extremely cool machines and technologies released and because of the way show organizers AEM navigated concerns about COVID-19 as the situation broke across America. It also rained — in the desert.

The Association of Equipment Manufacturers (AEM) said total registrations for the show was over 130,000, but the attendance felt lighter, which everyone expected. According to almost every manufacturer I talked to (20 +), booth traffic was lower, but quality was much higher. While many booth crews were slimmed down, almost all of the exhibitors showed up despite a few big last second dropouts like Volvo Construction Equipment and Miller Electric. For some reference: There was a record 2.7 million + net square feet of exhibits featuring 2,300+ exhibitors from multinational giants to small firms with specialized products.

There, of course, was a metric tonne of cool equipment released, ranging from Case and John Deere’s new dedicated dozer and grade control track loaders to JLG’s Davinci all-electric scissor lift and Kubota’s SCL1000 compact tool carrier. I will discuss all that in an upcoming feature hopefully posting this week. We will also continue to post about new products released at the show all week long.

Of course, all the coolest exhibits were outside in a Festival Lot that you had to take a bus to get to, which often had an intimidatingly long line, but once you got there the booths were worth the rest of your day — like Cat’s crazy Global Operator Challenge arena (video below) and JLG’s Elevating Access booth with its extremely awesome virtual elevator. All along the way, AEM did a great job of making everyone feel safe. Daily e-mails were sent out assessing the changing situation, hand sanitizer stations were everywhere, booths and attendees sported “No Offense, Just Makes Sense” no handshake signs and buttons and the elbow/chicken wing became the preferred method of greeting.

Perhaps most memorable was simply attending.

Everyone you met knew you had skin in the game. Most folks had an opportunity to back out, so people knew you were going above and beyond to not miss CONEXPO 2020. Every hand you did shake was an extremely important one, and the overall sentiment was that we still need to meet to do business and even a pandemic wasn’t going to stop the construction industry from moving forward. More to come soon. Until then, here are some quick stats on the show and some photos to give you a sense of what it looked like if you didn’t get to attend. All photos courtesy of AEM.