John Deere Crowns Winner of ‘Small Machines. Big Impact.’ Contest, And We’re There to Cover It 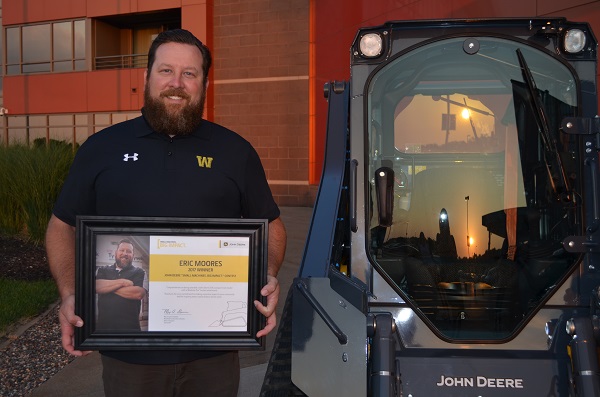 And then there was one. After all the online votes were counted, Eric Moores, a high school building trades instructor in Woodbine, Iowa, was crowned the grand prize winner of the inaugural John Deere “Small Machines. Big Impact.” contest on July 10 at the 2017 John Deere Classic pairings party. CE was on hand to watch Moores receive the award, as well as talk to all of the finalists. Take a look at the official release from John Deere below (as well as some photos we snapped), but be sure to check out the September issue of CE for full feature story coverage of the event.

As the winner, Moores will take home a new 333G compact track loader (CTL) with a WorkSite Pro bucket attachment to help with his project “Teaching Tomorrow’s Builders,” which includes hands-on learning in his building trades high school class, as well as other community improvement projects.

“The thing I love most is building homes, and this is a wonderful opportunity to teach kids all I know. Many of these kids come into the class not even knowing how to use a hammer,” said Moores. “But through hands-on learning, they come away with skills they can use for the rest of their lives. And quite possibly, use to find very lucrative and rewarding careers.” 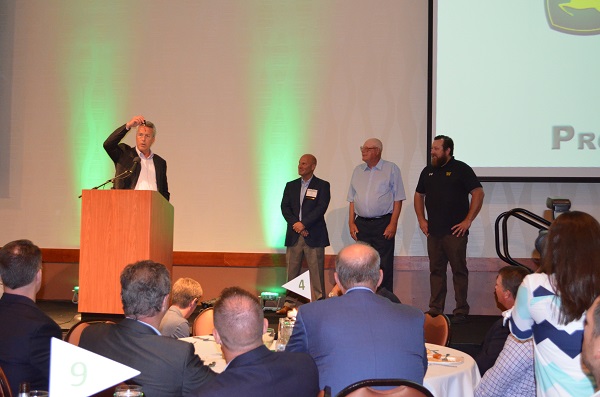 The three finalists are anxiously waiting to hear who won.

As a result of the overwhelming response to the contest, John Deere also announced that it will help the two runner-up finalists complete their community projects with a yearlong lease on a skid steer or CTL from John Deere Financial. The runners-up are Daryl Bridenbaugh of Putnam County, Ohio, and his project “Building Houses and Hope”; and Tom Noble of Oklahoma City, Okla., and his project “Fielding Student Success.” Additionally, each of the finalists’ local dealers — Horizon Equipment in Woodbine, Iowa; Northwest Tractor Company in Ottawa, Ohio and CL Boyd in Oklahoma City, Okla. teamed up with John Deere to make a $2,000 contribution to each project.

“We are thrilled to help all three of these inspiring people make a difference in their communities by using John Deere G-Series machines,” said Graham Hinch, division manager, John Deere Commercial Worksite Products. “We can’t wait to follow them on their journey and watch them complete their projects.”

John Deere launched the “Small Machines. Big Impact.” contest on March 7, 2017 at CONEXPO-CON/AGG. From March 7 to April 30, individuals from the U.S. landscaping, agriculture, and construction industries were invited to submit an entry detailing what kind of impact they would make in their community with a G-Series machine. 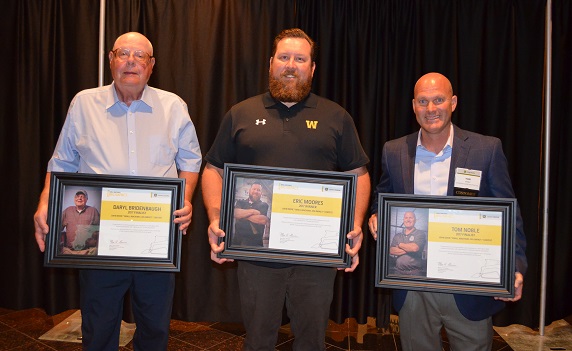 Daryl Bridenbaugh, Eric Moores and Tom Noble stand with their plaques after the announcement was made.

Out of 665 contest entries, three finalists and their projects were selected by John Deere based on the following criteria: community impact; alignment with one of the John Deere Corporate Citizenship priorities; and the value a John Deere skid steer or compact track loader would add to the project.

From June 15 to July 5, the public was then invited to vote online to help choose which of the finalists’ community projects would become a reality with the power of a G-Series machine.

For additional information, including official rules and regulations, visit Deere.com/Impact.