Under the pure blue skies above suburban Milwaukee, a man in a bright orange safety vest seemed to bounce between dumpers, excavators, telehandlers and wheel loaders. The folks at Wacker Neuson invited me and some other media members out for the unveiling of some prime pieces of iron and to show off its revamped facility in Menomonee Falls, Wisc., just up I-45 from where Laverne and Shirley once capped bottles rolling through Shotz Brewery.

Since introducing its skid steer and compact track loader line in 2014, Wacker Neuson has brought manufacturing of those products to the United States. The Menomonee Falls facility rolls out about four new skid steers or compact track loaders per day. The company focuses on high-efficiency and keeping pace with demand, to avoid backlog as well as inventory glut.

Everything you see in the factory seems to scream efficiency, from the computer guided assembly to the lighting, from the layout of the floor space to the automated paint facility. And every piece of equipment — that is, 100 percent — is tested in house to ensure quality. As soon as the equipment rolls off production, it’s right into the shipping container waiting at the end of the line, ready for delivery to those awaiting customers.

Over the last year, Wacker Neuson has been focused on sharpening its brand and expanding the industries it serves, building up its presence in Ag and oil and gas. The company has unveiled a new logo, with the tag line “all it takes,” a new motto to highlight the manufacturer’s dedication to customer service and quality.

“We’re a company on the move,” said CEO Chris Barnard, who will be retiring in December. “I’ll be leaving behind a company that is poised for growth.”

Since 2012, Wacker Neuson has expanded its North American presence, and is complementing that growth in Latin America. Part of the company’s big push in the agriculture market includes offering customized models of its skid steers with an anti-corrosion coating fit for working with fertilizer. The company is also working to introduce equipment to new markets with features tailored to the customer base. 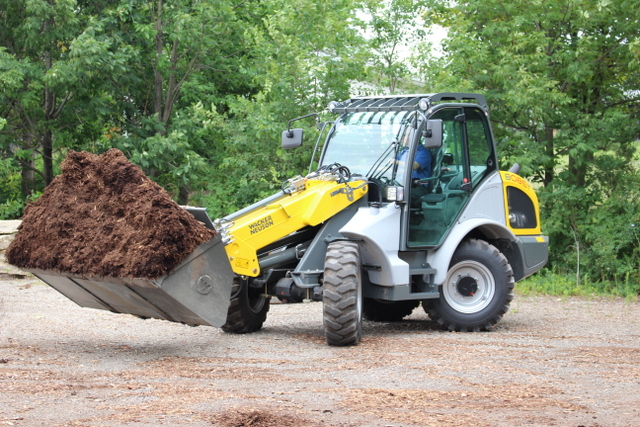 Wacker Neuson also unveiled two new wheel loaders, the articulated 8085 and telescopic 8085T, both with all-wheel steer for improved maneuverability and stability on the jobsite.

“In the past when we brought new equipment to market, we didn’t necessarily customize it,” said Johannes Schulze Vohren, regional president North America. “A wheel loader in Europe has different needs than in North America.”

Outside, under the shadow of “Mount Wacker,” the company’s demo grounds, a tag team duo of Wacker Neuson equipment trainers took an assortment of machines through their paces before the assembled media. The company unveiled updates to a number of machines, introduced some new offerings to the North American market and provided a glimpse of the future with a slate of all new machines from the company.

Exciting newcomers include the TH522, the company’s first telehandler for the North American market, which offers unique ground-engaging capabilities to allow the machine to act like a wheel loader to dig and carry, a skid steer capable of using multiple attachments and a telehandler with a lift height of 16 ft, 7-in. and operating capacity of 4,100 lbs.

The company has unveiled a new logo, with the tag line “all it takes,” a new motto to highlight the manufacturer’s dedication to customer service and quality

Wacker Neuson also unveiled two new wheel loaders, the articulated 8085 and telescopic 8085T, both with all-wheel steer for improved maneuverability and stability on the jobsite. The 8085 has a lift reach of more than 10 ft, while the telescopic boom of the 8085T extends to more than 15 ft.

Perhaps the crown jewel of the new machines was a compact excavator that pushes the envelope of what it means to be compact. Coming in early 2016, Wacker Neuson will release the 14-ton ET145, which takes the company into a weight class that is typically filled with larger crawler excavators. Yet the ET145 offers the same features that operators of compact excavators have come to know and love, including rubber tracks, a heavy duty dozer blade helps with backfilling and grading jobs while adding stability. The 127-degree boom swing allows operators to dig along walls and trenches, work around pipes and even dig along traffic lanes. The ET145 is powered by a 75-hp, Tier 4 Final Perkins turbo charged diesel engine. The machine produces a breakout force of 20,500 lbf and a digging depth of 18 ft.

Brad Kramer is a contributing editor to Compact Equipment.