The Pros of Plasma 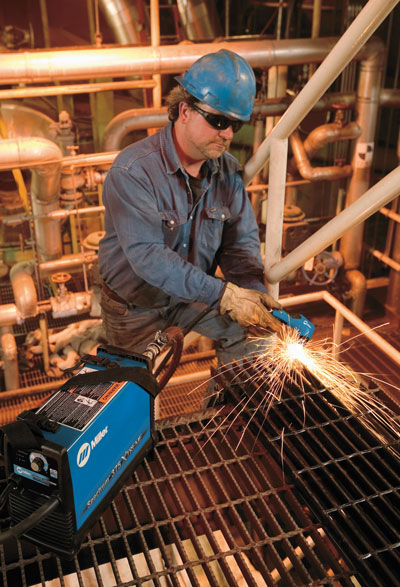 On a lot of construction jobsites, metal cutting is a necessary step before many applications can be started, so choosing a cutting process that offers versatility and portability is important for productivity. Two popular metal-cutting options — plasma and oxy-fuel — both have advantages and disadvantages. Determining which process is the best fit for the job depends on numerous factors, including the type and thickness of the metal being cut.

As materials such as aluminum and stainless steel become more common in construction applications, plasma technology has a leg up, since it can be used to cut any metal that conducts electricity, while oxy-fuel cuts only steel. Technology advancements also have made plasma a more portable option than in the past. The reduced size and weight of the machines improves the convenience and ease of use of plasma cutting on construction jobsites. The simple setup and operation of plasma systems — most just require flipping a switch and then turning a knob to the desired amperage for the thickness of metal before pulling the trigger — are additional benefits that make plasma a good alternative for construction applications.

The Basics of the Process
Plasma, an ionized gas that conducts electricity, is created by adding energy to an electrically neutral gas. The energy is electricity, and the gas is typically compressed air. These two ingredients are combined in a chamber between an electrode and nozzle, causing the gas to become imbalanced, creating plasma gas. Air pressure forces the plasma gas through an orifice in the nozzle, creating a concise, constricted flow that is electrically conductive. By increasing air pressure and intensifying the arc with higher voltages, the arc becomes hotter and more capable of cutting through thicker metals and blowing away the cuttings. One of plasma’s greatest advantages is its ability to cut non-ferrous metals, such as aluminum and stainless steel. This makes it a good alternative for construction applications, since a variety of materials are often used on jobsites.

Portability Improvements
Plasma cutters are much lighter than they were 10 and even five years ago, which has helped boost the popularity of the machines on jobsites. A machine with the ability to cut material up to 1 in. thick weighed about 500 lbs 10 years ago, and about 90 lbs five years ago. Today, manufacturers offer that machine at about 50 lbs. Smaller plasma cutters, such as those rated to cut up to ½-in.-thick material, weigh about 20 lbs and are about the size of a loaf of bread, making them highly portable.

Some portable plasma systems are capable of cutting a maximum metal thickness of 2 in. Plasma systems that cut thicker metal — 1½ to 2 in., for example — are typically portable by using carts or wheeled units on a jobsite, while plasma systems that cut thinner metals can be hand-held. The higher the amperage of the machine, the thicker the metal it can cut. These size advancements are made possible through improvements in inverter technology. As inverter technology has progressed, many jobsite tools, from generators to plasma cutters, have gotten smaller, lighter and more powerful. 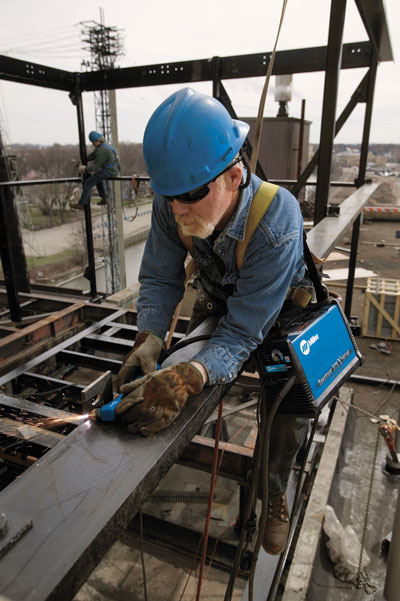 While plasma cutters do require electrical power and a source for compressed air, that is not typically an issue that hinders their use in construction applications, since air compressors and generators are common equipment on jobsites. A plasma cutter can be powered using an engine-driven welder/generator or a standalone generator. The same technology advancements that have made plasma cutters smaller and lighter have also made them able to run on less generator power than in the past, so generators necessary for the job can be smaller. Generators on construction jobsites typically provide at least 9,000 or 10,000 watts of power, which is enough for most plasma cutters.

No Gas Needed and Easy to Use
Another key to the portability of plasma is that it does not require the use of oxygen or other explosive gases. That means there are no heavy gas cylinders or containers to store or move around a jobsite. This also results in a safer jobsite. There is no need to deal with an open flame or to string and maneuver gas hoses that could be damaged or leak, which are additional safety benefits of plasma.

The lack of gas tanks also helps make plasma a quick process to set up and start using. There is no preheating required with plasma, since the flame gets hotter than it does with the oxy-fuel method, which also helps make plasma quick and easy to use. With plasma, an operator can pull the trigger and go, rapidly and precisely cutting, gouging or piercing any electrically conductive metal. Plasma also can be used to cut expanded and stacked metals. Plasma machines in the past had high-frequency startup, which could interfere with electrical equipment in the area, such as computers. Those concerns no longer apply to plasma technology, since units are now built without high frequency startup.

Minimal Distortion and Cleanup
Several factors contribute to operators having less cleanup of the metal after cutting with plasma. Faster speeds on thinner metals can be achieved with plasma cutting, and this can result in less distortion. This can make the cut look better and cleanup quicker. There is also a much smaller heat-affected zone (HAZ) with plasma, so there is less worry about warping, distortion or damage to the metal. Also, the higher heat produced in the plasma process results in hotter slag that doesn’t fuse as much with the base material, so it’s easier to chip off. All of these factors combine to result in less time spent on cleanup, which equals more time dedicated to other work on the jobsite.

Cost Considerations
The initial investment in plasma machines is often more expensive than other cutting methods. However, the electricity required to power plasma cutters likely will offer lower costs in the long run compared to the gases needed to power oxy-fuel torches. Both systems do require consumables that need to be occasionally replaced — gas and cutting tips for an oxy-fuel system and tips and electrodes for a plasma torch. Those costs over time are comparable between the two methods.

Despite the higher up-front cost, plasma can be used to cut more types of metals on a jobsite, and therefore can be used for more jobs, which can equal a greater return on investment over time. Many plasma machines also offer benefits outside of cutting metal, including gouging capabilities. Gouging is a common practice on jobsites when old welds or imperfections need to be removed. Gouging with a plasma machine produces less smoke and noise and offers more control over the arc than carbon arc gouging. The higher the amperage of the machine, the thicker the metal that can be gouged with it.

Consider the Benefits
The biggest benefits to keep in mind when considering plasma cutting for a construction jobsite is the ability to cut many types of metals, the ease of use of plasma systems and the portability of the newer, lighter machines. Plasma continues to gain popularity on jobsites as the equipment advances and becomes less expensive while still offering the ability for precise, clean cuts with minimal cleanup.

Tim Lux is a technical service manager for metal cutting for Miller Electric Mfg. Co., based in Appleton, Wis.