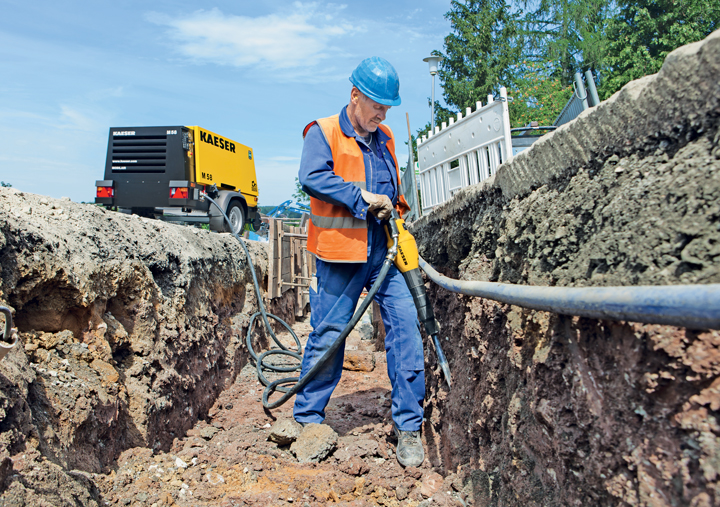 From Hammers to Tampers, Learn How to Diversify Compressor Operations

Before there was Air Jordan, there were air tools. Long before “Rosie the Riveter” cradled an air hammer on a World War II-era magazine cover, there were air tools. In fact, air hammers date clear back to the 1890s. This is a mature industry, in other words. Yet today’s tools and the air compressors that power them continue to be refined. The industry has for the moment settled on an optimum-sized portable compressor to support most applications, but tools are being employed in brand-new ways.

Chicago Pneumatic’s presence in the market for more than 100 years stems from CP tools riveting the steel beams on the Golden Gate Bridge, the Empire State Building and other iconic structures. Nowadays, bridges are bolted, but all those flattened rivets need to be removed during repairs. Enter the modern rivet buster. Two CP models can convert 45 cu ft per minute of airflow into 700 to 900 blows per minute (bpm). The busters feature hardened steel pistons and a “teasing” throttle that lets an operator regulate the battering. The units have the hitting power equivalent to a 60-lb breaker, yet weigh only half as much.

Because of these handy characteristics, rivet busters have been repurposed, says Gus Armbruster, CP’s manager of handheld construction tools. Breaking concrete is the tool’s most common application today, a necessary job if not as ennobling as erecting the Golden Gate. 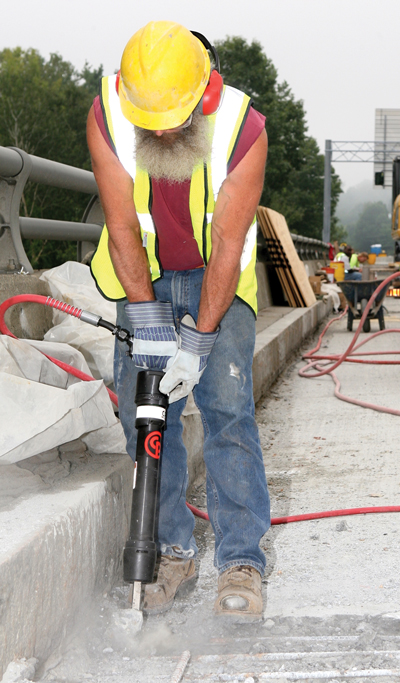 Most rivet buster manufacturers feature a range from 6 to 11 in. However, the standard and most popular rivet buster options are 8- and 11-in. cylinder lengths.

Doosan Portable Power’s sales volume leader is its 185-cfm towable compressor. Most manufacturers tell the same story: 185 cfm is the norm in the North American market. There are bigger and smaller towable units, but a 185-cfm with a 50-ft-long, three-quarter-inch ID hose is the standard. It can power two 90-cfm breakers, which gives a contractor flexibility. Buyers of Doosan’s 185-cfm models have a choice of engines — Deutz or Doosan 49-hp Tier 4 Final diesel engines or a Kubota gasoline power plant. Each compressor is housed in a “virtually indestructible” canopy.

“Buyers should keep in mind the importance of reliability and the cost of ownership,” says Jeremy Bailey, Doosan Portable Power’s air products manager in the Americas. Doosan may not offer the lowest priced compressor, but it has heavier-duty components that play into cost of ownership. The machine will last longer and have a better ROI over the years.

Kaeser Compressors has a slightly different take on the optimum size of a towable compressor. The family-owned German manufacturer’s most popular model is the Mobilair M58, a 210-cfm compressor. Chance Chartters, Mobilair sales manager, says it is all in the engineering.

Adds Kaeser marketing services manager Michael Camber: “Getting more air from a given amount of horsepower is a characteristic of Kaeser throughout its product line. It’s not from luck but by design.” Armbruster observes that it is not possible to hurt a tool by connecting it to a compressor with abundant cfm, so long as it delivers only the recommended psi. “A tool will only consume the amount of air needed to work. Too much pressure is where you are in danger of breaking it.”

Neither Doosan Portable Power nor Kaeser offer a line of pneumatic tools. Doosan’s Bailey says his company consequently works extra hard to keep abreast of the tool market. “We keep tabs on nozzles and breakers and trends and what direction they are going so the air compressors can meet any evolving tool needs.”

Sullair, on the other hand, has been designing and selling air tools for most of its half-century of existence. “We’ve been offering them since the early 1980s,” says Luis A. Torres, Sullair’s senior manager of retail operations. “Our products are original Sullair designs, but we partner with a manufacturer to build them. We are primarily a compressor manufacturer and know what we’re good at.”

A breaker, or hammer, is the most often employed air tool, and Sullair’s breakers reflect the company’s design concept of “power through simplicity” with many high-wear parts eliminated to reduce maintenance and downtime. Sullair also uses standardized components that are interchangeable among its 10 breaker models. Chipping hammers are another tool frequently utilized. They are used when a 60- or 90-lb jackhammer would be overkill, such as doing overhead work or in trimming away grout or concrete veneer. Torres says the light-but-hard-hitting hammers have become versatile tools of choice.

Chicago Pneumatic offers 20 chipping hammer models. The smallest — model CP0012 — weighs just 12 lbs and requires only 20 cfm for operation but can deliver up to 2,600 bpm. One Sullair chipper, the MCH-2, is slightly heavier at 16.5 lbs and needs 34 cfm but produces 3,600 bpm. Pneumatic rock drills also are go-to tools. Sullair’s MRD-50 is the brand’s “all-purpose, heavy-duty” drill for sinking holes as deep as 10 ft. It has variable speed control and is kept oiled with an inline oiler. Chicago Pneumatic has a line of rotary drills that can double as chipping hammers. In some of them, the operator just pushes a button to change modes.

CP especially is open to developing new tools. “It doesn’t happen every year, but when we hear of a customer with a special tool need, we try to produce a tool to meet it,” Armbruster says. “When we find someone using one of our tools in a way we didn’t know it could be used, we modify one or two parts and market it. We are a force for innovation of tools.” 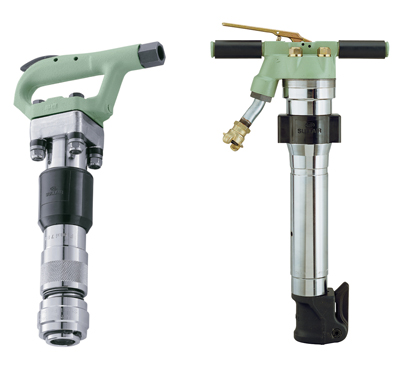 Pictured are a Sullair chipping hammer and paving breaker.

Besides breakers, tools frequently used by Doosan Portable Power customers include power tampers for repacking excavated soil and bores for tunneling beneath pavement. “And sometimes it is just nozzles,” Bailey says, “especially in the north, for blowing out sprinkler and irrigation systems so they don’t freeze up and burst over the winter.”

So what’s new in the old pneumatic tool business? Sullair is introducing a kit to change over a breaker from a traditional T-handle to a “flex” handle that spares an operator some of the breaker’s violent movement. Communities have begun to require that ergonomic feature.

Chicago Pneumatic has a line of wrap-around sound buffers — “mufflers,” Armbruster calls them. “A jackhammer produces about 160 decibels. With a muffler, you can reduce that by about 10. A customer who runs a hammer without it and then with it thinks the muffled tool is not working well because it doesn’t sound the same.”

Finally, Armbruster sees growing market share for compressors that are smaller than the standard 185-cfm. Blame emissions control regulations. “The trend is toward 100-cfm compressors because of Tier 4 price increases. Contractors and rental houses can’t absorb that extra cost, so they’re moving toward the smaller units.”

Giles Lambertson is a contributing writer to Compact Equipment.