Sidewalks have always been among the most challenging applications for snow and ice management professionals. Although the industry has made tremendous advancements in clearing more snow using less labor and de-icing materials, many facility managers and contractors still struggle with their walkways. For The Henry Ford complex, however, the grounds maintenance personnel decided it was time for a change. And finding a better solution meant having them drop what they were doing … literally.

Based in Dearborn, Mich., The Henry Ford is a national historic landmark, consisting of five different attractions: the Henry Ford Museum, IMAX theater, Ford Rouge Factory Tour, Benson Ford Research Center and Greenfield Village. The five attractions are nestled throughout an expansive, 240-acre campus, which is painstakingly maintained by John Kulka, manager of grounds and garages, and his groundskeeping crew.

During the winter months, Kulka typically has about 10 employees helping with snow and ice management, and their jobs are exceptionally challenging to maintain the driving and walking areas. “Due to our type of operation, the expectation is to always have snow and ice cleared right down to the cement,” he says. “We’re held to very high standards.”

Depending on the amount of snow that falls in an event, Kulka uses a couple of different tactics for clearing the 1.5 miles of sidewalks throughout The Henry Ford campus. For heavy snow, he plows the sidewalks and follows up with a rotary broom. If it only snows lightly, he may just use the rotary broom. 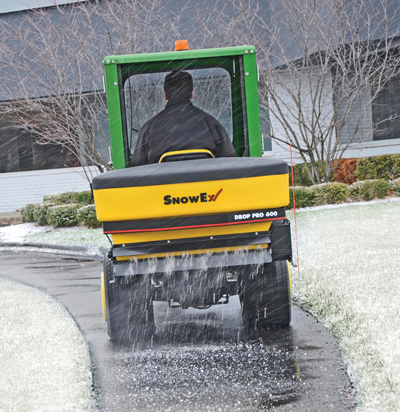 Kulka also applies a variety of de-icing products after plowing and sweeping. Bulk salt, ice melt and calcium chloride are the three he most commonly chooses. To spread them, The Henry Ford’s groundskeeping crew traditionally used walk-behind rotary spreaders or, in some circumstances, spread the material by hand. The main problem with these methods of ice management was the amount of grass kill in the spring. Every year the facility would spend a significant amount of time and money to re-sod the areas where salt was over-applied, burning the grass along the sidewalks.

Kulka had 15 years of experience maintaining sidewalks for a golf course prior to coming to The Henry Ford, so he was fully aware of the consequences of spreading salt near grass. But rather than be complacent with replacing sod every year, he began searching for alternatives.

“I started doing some internet searching to find other ways of managing ice on sidewalks, and I discovered the drop spreader concept,” says Kulka. “However, I also needed something affordable, so I wouldn’t be out a lot of money if it didn’t work.”

After getting an idea of what he wanted, Kulka visited his local Weingartz dealer to discuss equipment options. What appealed to him most was a Drop Pro spreader attachment from SnowEx. The spreader holds 14 cu ft of material and has an auger feed system that drops material in a consistent, 48-in. wide line behind the spreader. Kulka believed that by dropping salt in a tight pattern, rather than throwing it with a rotary spreader, he could keep the de-icing material on the sidewalks and off the grass. He says, “I’ve had good experience using SnowEx spreaders in the past, and this one fit my price point, so I felt confident it would work for me.”

Because the new spreader seemed to fit his needs and budget, Kulka purchased the unit in January. Additionally, he got a mounting kit to attach it to the back of a John Deere Gator. Since the purchase came in the thick of the snow and ice season, the machine was put right to work on sidewalks, in place of the crew’s existing rotary spreaders.

The results were surprising. Unexpectedly, the new spreader appeared to be more effective at melting ice on sidewalks, due to the way it applied salt to the surface. The groundskeeping crew was able to lay a higher concentration of material in one pass vs. using a rotary spreader with a spinner that can throw material 10 ft wide or more. This higher concentration helped melt the ice quicker than ever before. “Our sidewalks were clear almost immediately,” says Kulka.

Even though a higher concentration of salt was placed on the sidewalks, the groundskeeping crew reduced the overall amount of material it was using. This benefit was yet another surprise for Kulka. In fact, he estimates his drop spreader uses 30 to 40 percent less salt than rotary spreaders to cover the same area. The reason the drop spreader proved to be more efficient is that it places material exactly where he wants it without flinging extra salt into unwanted areas.

In addition to the unexpected advantages of the drop spreader, Kulka achieved his main goal in the spring, when he discovered there was less grass kill. That year he reduced the amount of sod the facility had to replace by about 50 percent. “Going into this, my only expectation with the drop spreader was to kill less grass,” he says. “We did that and so much more.”

As impressive as the results were, Kulka is even more excited for next year. By using the drop spreader throughout the whole winter, rather than half of it, he anticipates there will be less grass kill, meaning more money saved on sod replacement. “Seven pallets of sod in the spring is typical,” he says. “But next season, we might get down to one.” If this goal is accomplished, it will save The Henry Ford hundreds of dollars each year, not including the labor to install and maintain.

It’s not a secret that he keeps to himself. As an industry veteran, Kulka is happy to share tips with other facility managers to help them be more effective and save money. He says, “If anyone tells me that they’re frustrated with over application of salt, I’ll tell them they’re crazy not to consider a drop spreader. I strongly recommend it for sidewalks.”

Bryce Goodell is a writer for The Promersberger Co., based in Fargo, N.D.