Cat Caterpillar Engcon home Komatsu Trimble by CE Staff | on June 24, 2019 | 1 comment | in Business and Software | Like it

Just north of Denver, Colorado, in the small town of Berthoud, the Dirt Ninja, aka professional contractor Tom Gardocki, and professional FMX rider James Carter found some common ground between machine control and motocross. Gardocki had the unique experience to build a freestyle motocross (FMX) practice track for Carter using a 3D design, and the Trimble Earthworks Grade Control Platform for Excavators with tiltrotator automatics, providing both individuals with unexpected insight into the ups and downs of building a track using construction technology.

The track — constructed in a space about the size of a football field — incorporated small hills and curves, or whoop-de-dos, and several jumps, often with up to 30 degree slopes. In general, jumps are a minimum of 45 feet long, 12-14 feet high and 12 feet wide at the top with a 20-24 foot wide bottom, depending on slope of dirt pile.

Once designed and conceptually approved by the rider and his team, Cyrus exported the design to the Trimble Siteworks Positioning System and, ultimately, the Trimble Earthworks Grade Control Platform. 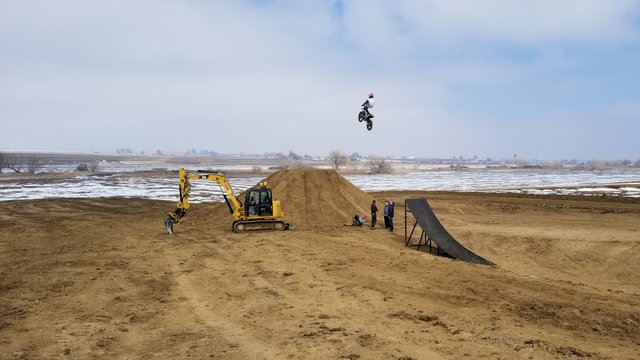 Gardocki says, “I’ve used 2D machine control systems for years for the excavation of traditional infrastructure, but this was my first time testing an excavator with 3D grade control and tiltrotator automatics. I was a little nervous because of the tight timeline, but it turns out, it was a pretty easy adjustment. It took about an hour of use to be fully comfortable, and we were off.”

Meanwhile the dozer and motor grader, operated by McKendry and Cyrus respectively, generated material from the frozen ground (Spring in Colorado) for Gardocki to shape/mold into the finished design.

Over the course of two long days, the Dirt Ninja built the track per the design specifications.

Gardocki further noted that the “Autos” functionality on the excavator and the tiltrotator were particularly beneficial for grading speed. He adds, “It was quicker and more accurate than conventional methods for getting us closer to final grade. We could easily see how far away from grade we were during the excavation. Without Autos and machine control, this same job would have taken us a week and required two more people to survey. We did it with two people in two days.”

To ensure slope and curve accuracy, the team used the Trimble Siteworks Positioning System and Trimble SiteVision to compare the 3D models with actual work completed.

“It was super cool to walk around looking at the device on my phone and see the finished layout and how close we came to the design specs,” says Gardocki. “This job did require that we get the curves, banks and slopes accurate.” 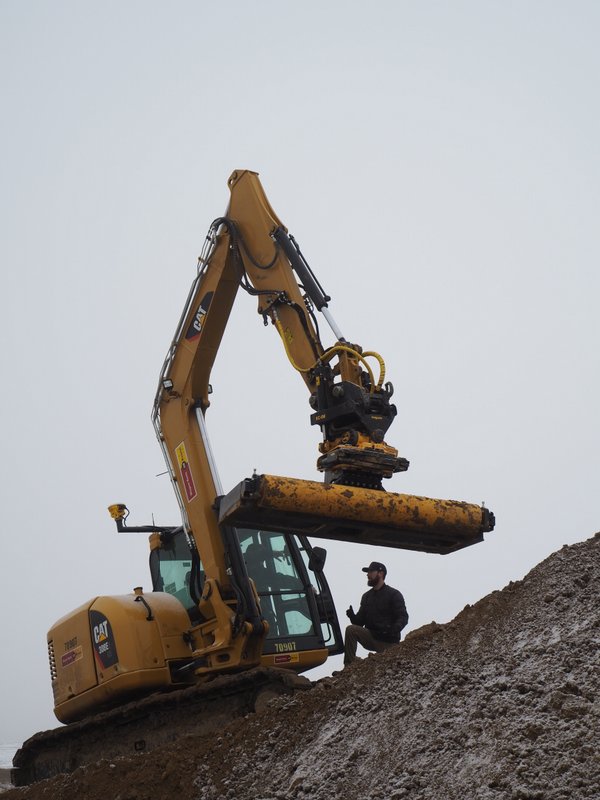 On the third day, Carter arrived with his bike and test rode the newly constructed track. At his request, Gardocki further adjusted the jumps, curves and landing spots with the grade control equipped excavator.

“The problem with whoop-de-dos was maintaining speed,” explains Gardocki. “We smoothed out a few areas and reshaped the backside of a jump to improve landing angles and achieve necessary dirt bike speeds.”

After the work was done, Gardocki even took a few minutes to demonstrate the fine motor skills of a large machine like an excavator. With a grabber mechanism attached to the tiltrotator, he was able to pick up a glass beer bottle and hand it to James Carter without breaking the bottle.

He concluded, “I just can’t believe the precision and fine work capabilities that are possible on today’s heavy equipment. With advances like machine control automatics, we can dig virtually any site from roads to racetracks with speed and accuracy, and pick up 1000-lb equipment or even a glass bottle.” 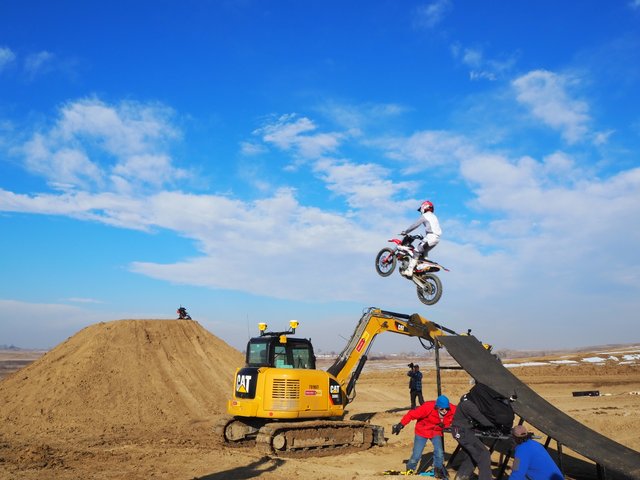 For more info on Trimble, click this link. No dirt biking required.