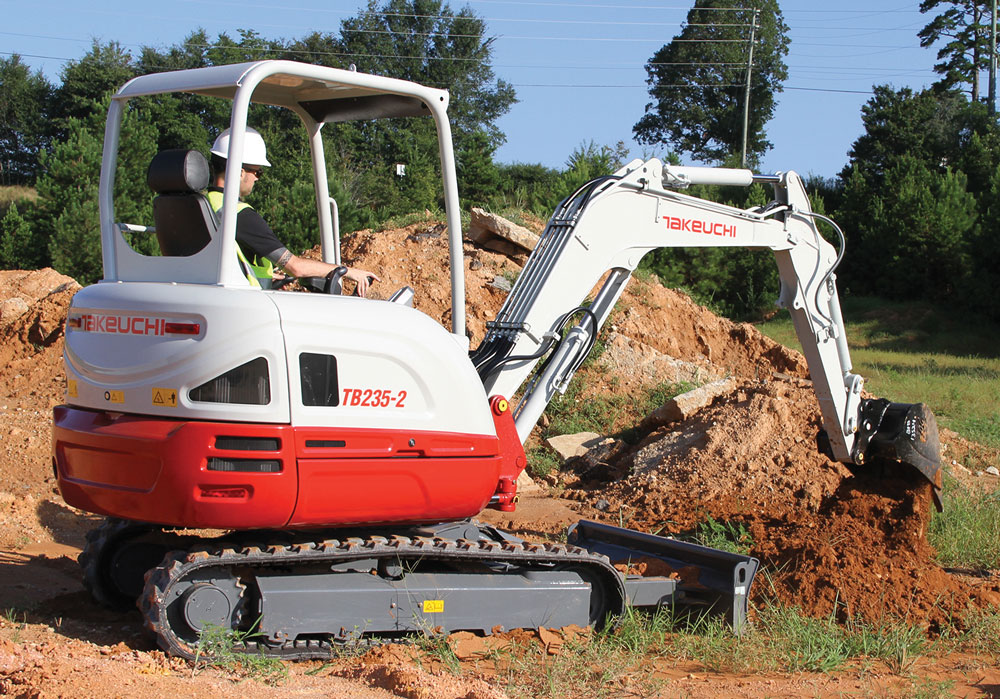 Takeuchi Mfg. began in 1963 and has been a pioneer in the compact equipment industry ever since. Takeuchi developed one of the world’s first compact excavators in 1970, and the company’s innovation continued again in the mid-‘80s with the introduction of one of the first compact track loaders. Today, Takeuchi is a world leader in the manufacture and service of compact construction equipment, including track loaders, wheel loaders, conventional excavators and zero tail swing excavators.

According to Takeuchi, its compact excavators are designed and engineered to be powerful, efficient and durable, providing a high level of quality and performance. Takeuchi products are the result of extensive research, testing and refinement and feature a standard two-year, 2,000-hour full machine warranty. Takeuchi compact excavators have feature sets that include a pattern change valve, pilot controls, proportional auxiliary hydraulic controls, long arms with integrated thumb mounts, spacious operator’s stations and maintenance access. Takeuchi customers are looking for dependable, productive excavators that deliver great performance and value. Takeuchi says it incorporates solutions into every component and feature for greater uptime.

Takeuchi offers buckets, couplers and thumbs from the factory. All Takeuchi excavators come standard with auxiliary hydraulics plumbed to mid arm that can operate a variety of different attachments that are available through its dealer network. All Takeuchi machines from its 6-ton weight class and up feature boom holding valves that will stabilize the boom and arm in case of a loss in hydraulic pressure as well as an over load alarm that alerts the operator when hydraulic capacity has been reached. Takeuchi machines are purpose built with extremely high build quality and attention to detail. The size of components and materials used across the entire line provides greater durability and extends the life of the machines, says Takeuchi.

“With the versatility of today’s excavators, it is important to find a machine that provides the greatest value and feature sets,” says Lee Padgett, product manager at Takeuchi-US. “Also, determining the right class excavator based on weight, width and dig depth is a key first step.”