When I arrived in Peoria last week for Caterpillar‘s spring press event, I was not anticipating the release of a completely new category of construction equipment. I blame Tier 4 diesel engine emissions for my lack of expectations from equipment manufacturers. Because machine makers have concentrated so much on after-treatment systems for off-highway diesel engines, big new innovations have been few and far between of late. When I sat down in the indoor arena at Cat’s Edwards Demonstration and Learning Center near Peoria, I was ready to yawn and watch some new updated machines with a few higher specs and a lot of focus on electronic-driven operation and service technologies for payloads, machine automation and safety and eco functions.

Instead of yawns, Cat dropped some jaws with the release of its Cat 304.5E2 XTC mini hydraulic excavator — the first model in the Xtra Tool Carrier (XTC) lineup. The closest comparison might be Ditch Witch’s old XT1600 excavator tool carrier, which is no longer produces, but these are totally different machines. Built on an E2 platform, the 304.5E2 XTC is a Cat mini hydraulic excavator with an innovative attachment coupler interface engineered into where the dozer blade normally sits. It’s a universal, skid steer-style coupler (manual only) that allows for use of compact loader tools including a general purpose bucket, multi-purpose bucket, forks, dozer blade, brooms, power box rakes and trenchers. Coupler operation is controlled through a flick of the XTC switch on the right hand console in the operator station. Then the standard right hand joystick becomes your loader. I operated the XTC extensively, and it’s the real deal.

“Did the customers ask for this? No, they didn’t. This is us,” explained Greg Worley, senior project engineer for Caterpillar global mini hydraulic excavators, at the event. “It’s our concept, our thought process. We go out and visit customers all the time, and part of our job is to look at the customers’ job applications and think of how we can invent something to help them be better. Some customers are very good at inventing things themselves, and sometimes we partner up with them, but in this case we looked at customers and came up with the idea of versatility, taking two machines, an excavator and a skid steer, and making them into one.”

The result is something quite unique. While it was a learning curve to place dirt into the XTC’s attachment bucket for transport, which entails bringing the boom very close to the unit, I got the hang of it fairly quickly. A clam-shell-style bucket is definitely needed to dump the spoils, as the excavator doesn’t really have enough lift height to dump a normal bucket, but despite that, I could definitely see its many benefits. The 304.5E2 XTC is aimed at eliminating two machines when possible, allowing operators to achieve improved productivity in material carrying applications and reduce backfilling times with just a mini ex. Imagine an urban construction situation where you need to dig for a pool and have nowhere to place the spoils. An XTC can dig, hold and carry that dirt back to the truck. Consider a utility project that requires lots of pipe. Attach a set of pallet forks to the XTC and save time and extra machinery by transporting pipe with the digger. Once you’re finished with the project, attach a broom to the XTC and clean everything up. 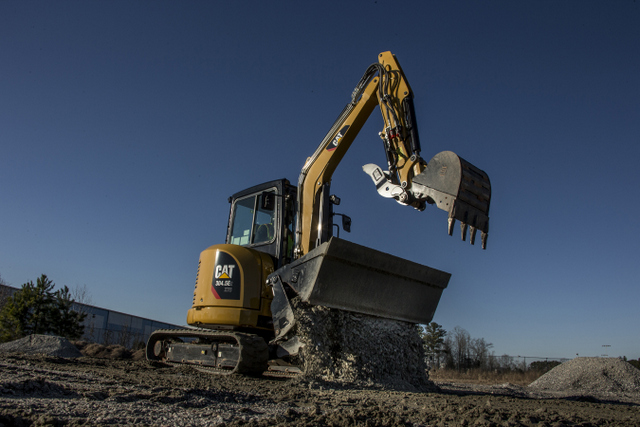 A clam-shell-style bucket is definitely needed to dump the spoils, as the excavator doesn’t really have enough lift height to dump a normal bucket.

“Now, this isn’t a skid steer,” said Worley. “I’ve been asked already, how many different skid steer work tools work on this? I’m going to say everything, but we do have an approved list … As far as I’m concerned, the sky’s the limit. The question is: Does it meet your expectations or no? That’s what we’re going to find out. We’re going to market very differently with this machine. It doesn’t go into production till August, won’t hit the ground till September, we’ll have customers on it at GIE+EXPO in October. So for the next six months, we are creating a market. But I’ll tell you this, every time I get on it I find a new way to use it.”

The 304.5E2 XTC also includes the standard features and benefits of the E2 model lineup — automatic two-speed, 100 percent pilot controls, great bucket rotation, blade float and the safety built into every Cat mini excavator. Also, the unit includes the excellent COMPASS monitor system, which includes a passcode protected security system, adjustable auxiliary flow control and a site reference system all as standard. There is also a rear view camera option. When it comes to the undercarriage, the unit has been re-engineered for added stresses.

“We’ve beefed up the entire framework,” explained Worley. “The last thing we need is to take something to market that fails, so we’ve spent a long time doing all the structural side of that. You’re going to have increased wear on the rubber belt because you’re going to be using it more. You might run 800 to 1,000 hours on a normal mini excavator belt, but on the XTC you might run 400 or 500 hours, depending on your load-and-carry operations. We have also increased the rollers as far as longer life and higher quality because, once again, while we’ll have increased wear on the belt, we don’t want anything failing and wearing out prematurely on the undercarriage.” 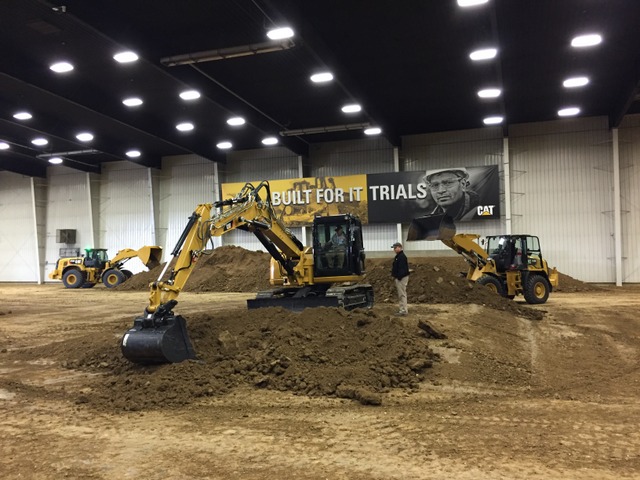 Using both the joysticks and variable angle boom foot pedal, I discovered new and inventive angles to dig with minimal practice required.

Of course, the 304.5E2 XTC wasn’t the only machine Cat released at its spring press event. Just as impressive to me as the XTC was the Variable Angle Boom (VAB) for the Cat 308E2 excavator (above). I spent most of my time operating the VAB, and I loved the versatility it adds to the digging process, allowing operators to dig closer and further away from the machine using a foot pedal. While providing a maximum dig depth of 169 in., the VAB extends the 308E2’s maximum reach by 30 in. to a total of 306 in., compared with the standard boom-and-stick configuration; dump clearance is extended by 56 to 239 in. In addition, the VAB allows the 308E2 to work closer to the blade and tracks, resulting in added lift capacity when working in confined areas. Using both the joysticks and VAB foot pedal, I discovered new and inventive angles to dig with minimal practice required.

“You’ll get greater reach of about 2.5 ft and greater height of about 4.5 ft,” explained Jennifer Hooper, marketing development engineer with Cat. “In addition to the reach and height, you can get closer to the machine, so the whole working envelope is impacted. The dig-to-blade component is pretty substantial, so a lot of people use them for like broom-and-dustpan-style cleanup. If you want to work in one lane of traffic or work near the verge when brush cutting, you can maintain that closeness to the machine itself with a Variable Angle Boom.”

Cat’s indoor arena at Edwards. The new XTC is in the foreground.

Lots of other equipment were released and open for operation at the event — it’s a Cat event we’re talking about here — including wheel loaders, soil compactors, material handlers and the cool new 630K Series wheel tractor-scrapers (we’ll cover the latter in a big way soon), but Cat’s small excavator options stole the show. Unfortunately, you’ll need to have some patience with these machines. The VAB is available to order in April with shipment in August (on the ground at dealers in September), and the XTC will be available to order in May with shipment in September (on the ground at dealers in October).