Brian Hefty, host of RFD-TV’s Ag PhD and a South Dakota farmer, was in the market for a new high-horsepower tractor. Like many farmers, Hefty had a number of questions about the new Tier 4A-compliant engines mandated for 2011 production, including, “What are the options for meeting the government’s emissions mandates?” and “How will the changes impact my bottom line?”

As the moderator for the Case IH BE READY Discussions on new engine emissions, Hefty got these and other questions answered by experts from across the agriculture industry and Case IH.

According to panelist Leo Bose, Case IH commercial training manager, farmers have two options for meeting Tier 4A emissions regulations — Selective Catalytic Reduction (SCR) or Exhaust Gas Recirculation (EGR): “With SCR technology, we’re taking an extra urea component and injecting it into the exhaust stream after the combustion process to reduce nitrogen oxides,” he said. “EGR technology brings exhaust gas back into the engine and uses a particulate filter to capture pollutants.” 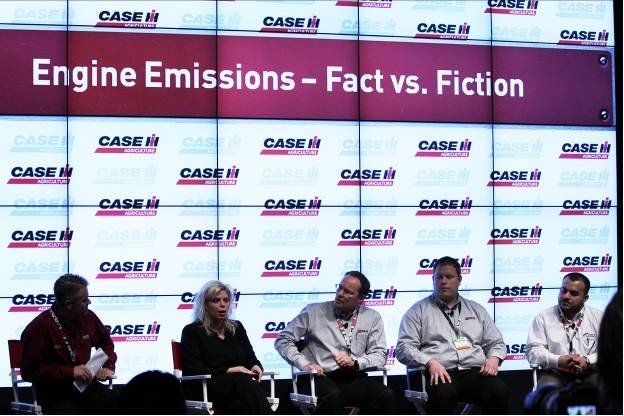 He explained that Case IH will employ SCR technology in high-horsepower equipment and EGR technology in low-horsepower tractors to meet new Tier 4A emissions mandates. “For Case IH, we took the approach of using EGR on the lower-horsepower tractors because, by nature, those tractors use less fuel. With SCR technology, farmers can get more power out of an engine because the engines are tuned to use all the Btu [British thermal unit] content that the fuel can deliver, thus improving performance and fuel economy, which is critical in high-horsepower applications.”

Bose indicated that farmers can expect to save at least 10 percent owning and operating costs with SCR technology. “By not bringing dirty air back into the engine, the engine is able to maximize power and lower fuel usage. It also lengthens oil change intervals from about 300 hours to almost 600 hours, as seen in the Case IH MagnumTM and Steiger tractors.”

David Stark, Case IH commercial product trainer, added: “The problem when you build an engine for horsepower, especially high-horsepower diesel engines, is that it pollutes. The SCR system treats these pollutants after they leave the engine, so the engine itself has no emissions components. They’re tuned for power and performance.”

“The key to treating pollutants after they leave the engine is Diesel Exhaust Fluid, or DEF,” Leo Bose explained. “DEF is injected into the exhaust stream after the combustion process to reduce or eliminate nitrogen oxides and particulate matter.” Bose noted that only a relatively small amount of DEF is required. “If you burn 100 gallons of diesel fuel, you would use 3 to 5 gallons of DEF,” he said. “Operators can maximize uptime because the DEF tank only needs to be filled every other fuel tank fill-up.”

Reflecting on Europe’s experience with SCR technology in the medium- to heavy-duty trucking industry since 2006, Manfred Pfleger, commercial training manager for Case IH International, said, “The SCR solution is the most common and the most efficient because you can really save fuel and really extend the uptime.”