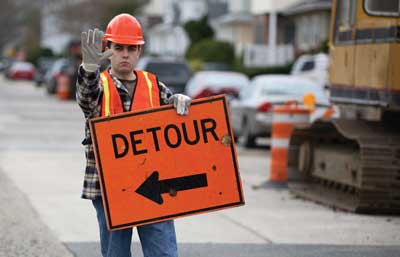 The biggest public segment — highway and street construction — is down 2.4 percent year-to-date.

Solid and stable economic improvement looks to continue in the overall construction industry. In May, the construction consultants and analysts at FMI released a revamped forecast for 2017 that predicted an increase of 6 percent for total construction put in place. Although this is a drop from the accelerated growth of 2013 through 2015, it’s an interesting indicator that may mean the recovery spike is over but more normal growth is in store for 2017 and beyond.

In a further sign that the housing market continues to strengthen, builder confidence in the market for newly-built single-family homes rose two points in May to a level of 70 on the National Association of Home Builders (NAHB)/Wells Fargo Housing Market Index (HMI). This is the second highest HMI reading since the downturn, which is definitely good news. The report shows that builder optimism is steadily growing even as the industry deals with higher building material costs, shortages of lots and labor and shrinkage in multi-family construction. And although sales of newly built, single-family homes dropped for the first time in 2017 this April, falling 11.4 percent to a seasonally adjusted annual rate of 569,000 units, total new home sales in 2017 are up more than 11 percent from this time last year, according to NAHB.

Construction spending hit a record level for the second straight month in March and is up 4.9 percent for the first three months of the year compared to the same period in 2016, according to an analysis by the Associated General Contractors of America (AGC). Construction spending in March totaled $1.218 trillion at a seasonally adjusted annual rate, essentially unchanged from the month before, said AGC. The year-to-date increase of 4.9 percent for January through March 2017, compared with the same months of 2016, shows demand for construction continues to experience robust growth.

Associations, contractors and manufacturers continue to push the government to offset that decline in public construction spending. New infrastructure proposals like the one being developed by the Trump administration could provide significant investments in roads, bridges, water and sewer that would boost overall economic activity, but the administration has yet to release satisfactory details. And while commercial markets are still registering solidly positive numbers, FMI did indicate that lodging, office and commercial construction could take a sharp downturn next year — especially lodging — which is dealing with a surplus of rooms and new competition in the market from the likes of Airbnb.