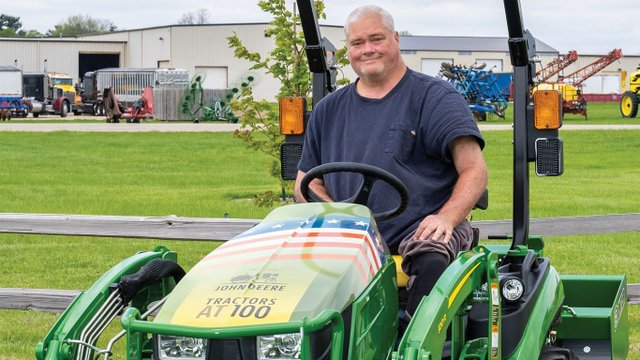 It began with writing his name on an entry form nearly one year ago. Now, Mark Newell of Sparland, Ill., proudly owns a new John Deere 1025R Compact Utility Tractor equipped with loader and a Frontier Box Scraper, courtesy of John Deere and dealer Kelly Sauder Rupiper (KSR) in Lacon, Ill. Newell won the tractor after his entry was chosen from thousands entered in the 2018 John Deere Drive Green grand prize drawing.

Last spring, the retired farmer entered the drawing at his dealer’s Drive Green event held at KSR, less than 10 miles from his home.

KSR partner/sales manager, Matt Aeschleman, said the event lets customers see and test drive many pieces of equipment in one stop. “Between our three north-central Illinois locations we have a few hundred people stop by every year,” he said. “Zero-turn mowers, compact utility tractors and our Gator utility vehicles are among the most popular machines. It really depends on what customers are looking for.”

Newell’s entry was drawn in December, but he almost missed out. After being declared the winner, representatives from John Deere called to notify him of the good news. However, the call was almost completely ignored. “I didn’t answer at first because I thought it was spam. Then, they left a very detailed message that I also ignored. Next, they sent me an email,” he explained.

Newell found the call hard to believe. “I called my dealership and they agreed it was probably not true. But, thankfully, they checked into it for me. The dealer called me back and told me I won,” he said.

Newell said the 1 Series Tractor will be a useful addition to his family’s property, especially for mowing, gardening and snow removal. “We have a good-sized garden. We will probably add a tiller and we can also spray and mow with it,” he said. It won’t be his only tractor on the farm. Newell also owns a pair of vintage John Deere two-cylinder tractors, model M and a model 320.

KSR formed after joining together in 2003 to create one company with three locations. The company has 75 employees working in three stores located in Lacon, Pontiac and Streator. During the past few years, Aeschleman said they’ve hosted several Drive Green events.

“Our events usually last about three or four days. We encourage customers to come in and test drive our equipment. We have an obstacle course where people can drive our Gators. We let them run our zero-turn mowers and operate some small, compact construction equipment,” Aeschleman explained. “We advertise to pull in new customers and try to bring people in who haven’t experienced our equipment or service.”

According to Aeschleman, his new customers often have different knowledge levels regarding tractors and attachments. “The majority are corn and soybean farmers, but along the river there are several duck hunting clubs, and cattle and hog farmers,” he said. “Our stores carry all the turf products, Honda generators, Stihl products, skid steer loaders, mini-excavators and farm equipment of all sizes including the largest tractors and combines. It’s a diverse portfolio of products.”

Before selling any equipment to a customer, Aeschleman said he makes sure to match customer needs to the right machine. “After the sale, we make certain the tractor and attachments are properly set up and we orientate customers, so they better understand the machine’s capabilities and operation,” he said.

KSR’s next Drive Green events are slated for May 16-18 at its Lacon, Pontiac and Streator locations. The public is invited to attend. To learn more about future events visit the JohnDeere.com Drive Green website.