Economized Tractors — Get a Great Machine for an Affordable Price

home John Deere Kioti Kubota Massey Ferguson May 2016 Print Issue by Giles Lambertson | on May 10, 2016 | 0 comments | in Compact Tractors | Like it 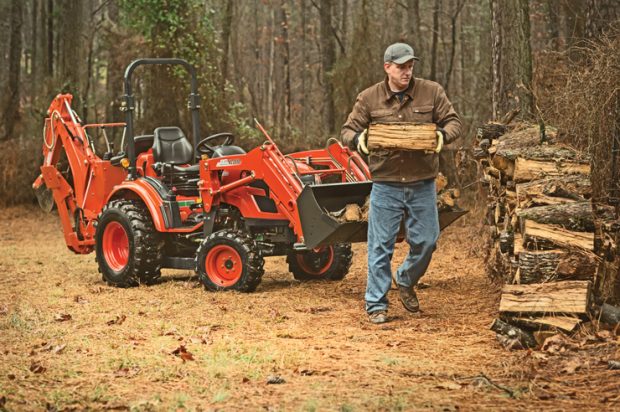 “Industry wide, it isn’t what it once was,” says Richard Kershner, product manager for John Deere compact utility tractors. “Customers today who use the tractors to mow once or twice a month, you don’t see them opening up their wallet and buying premium tractors like they did, though I think the market can come back.”

On the other hand, buyers may be getting used to buying economy work tractors that are as rugged and dependable as luxury models. Today’s market offers numerous models that are fully capable of getting a job done though they lack certain amenities and features. They are best-sellers even though they don’t deliver a premium model’s ergonomics or ease of use.

“Many commercial, rental and first-time buyers gravitate to the Standard L Series line versus our deluxe Grand L Series tractors,” says Robert Cockroft, Kubota product manager for tractors under 100 hp. “Commercial and rental purchasers tend to be less concerned about advanced features and more concerned with price and simplicity. As for the first-time buyer, they often feel they won’t use those advanced features or need the additional comfort.”

He adds that when customers end up needing a second tractor, they often opt for more perks and upgrade to a deluxe model. In terms of utility tractors, “compact” is a fluid term. It can be roughly defined as tractors with horsepower ranging from 25 to 60 hp. Within that category, buyers have real choices that vary far beyond the glossy color of the machine. Aside from price, other factors in the decision center on how a tractor will be used, day in, day out. A mowing tractor has certain power take-off (PTO) requirements depending on the type of mower unit. A tractor that will be used for front-end loading generally functions more surely with four-wheel drive. Plan to use a backhoe? Some models can’t accommodate one. 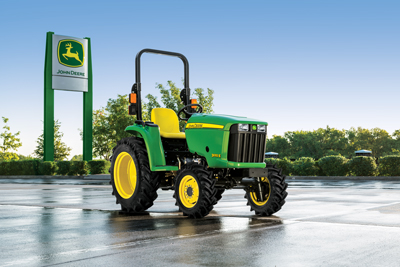 John Deere has electronic hydrostatic transmissions in the five models of its 3E Series, connected to Yanmar engines rated from 31 to 45 hp.

AGCO’s Massey Ferguson tractors offer eight series in the compact field — “three of them fully dedicated to the economy space,” says Warren Morris, tactical marketing manager for AGCO’s under-100-hp tractors. Two of the economy series are the 1700E and 2700E, “one the little brother to the other.” The 1700E Series tractors weigh 2,600 to 2,800 lbs with engines from 24 to 39 hp. The 2700E lineup each weigh 1,000 lbs more with engine sizes from 49 to 57 hp.

“These are designed to be price-point tractors,” Morris says. “What you don’t get in the E Series are comfort and convenience items like tilt steering, additional lighting and cabs. But the durability is the same. The five-year powertrain warranty is the same regardless of economy or premium.”

Kioti’s CK10 Series of compact tractors are “great for the value-minded customer,” says Christina Propst, Kioti Tractor’s creative director. Each of the four tractors in the CK10 Series (25- to 40-hp Daedong engines) can be equipped with either a manual transmission (six forward, two reverse) or a hydrostatic transmission. The choice of manual or hydrostatic is wholly subjective, according to Cockroft. “For customers who want the most basic model, the gear transmission is a time-tested, reliable option at a lower cost. For customers who want a tractor without bells and whistles but who still want ease of use and additional operator efficiency, the hydrostatic is the way to go. It also is a great option for first-time buyers or those who may not be familiar with tractor operation. It’s just press the pedal and go, a lot like your car.”

John Deere has electronic hydrostatic transmissions in the five models of its 3E Series, connected to Yanmar engines rated from 31 to 45 hp. The models have either 12-forward, 12-reverse PowrReverser or E-hydro transmissions, with customers finding a comfort zone in one or the other. “There are a large number of buyers who are scared of electronics on small tractors. They fear that if you have wires on a small tractor, that is a bad thing. That the more electronic it is, the more likely it is to break down. Our machines are very reliable.”

The reliability claim is backed by a six-year warranty — four years “bumper to bumper” and four additional years of drive-train coverage. Unlike some competing tractor warranties, the Deere warranty doesn’t distinguish between heavy commercial use and occasional residential use.

A manufacturer’s compact utility tractor lineup can range from barebones models costing $14,000 to premium models topping out at $35,000. Option choices make a difference, too. Kershner says prudent buyers of one of Deere’s economy compact models can save about 10 percent by choosing basic options. “That’s what we try to hold the line to.” Hydraulic flow rates vary from maker to maker and from machine to machine within a lineup, with a higher rate sometimes reserved for more premium models. Power take-off options also vary. Most economy models offer rear-mounted PTOs, which limits attachments that need a drive under the belly or at the front.

Kubota has two PTO options on the L2501 models, depending on the transmission. Gear-drive transmissions have a transmission-driven PTO with an over-running clutch.  “Although this system is not as user-friendly as some other systems, it still is easy to use,” says Cockroft. Hydrostatic models have a live power take-off so an operator can change the speed and direction of the tractor without having to use the clutch pedal. 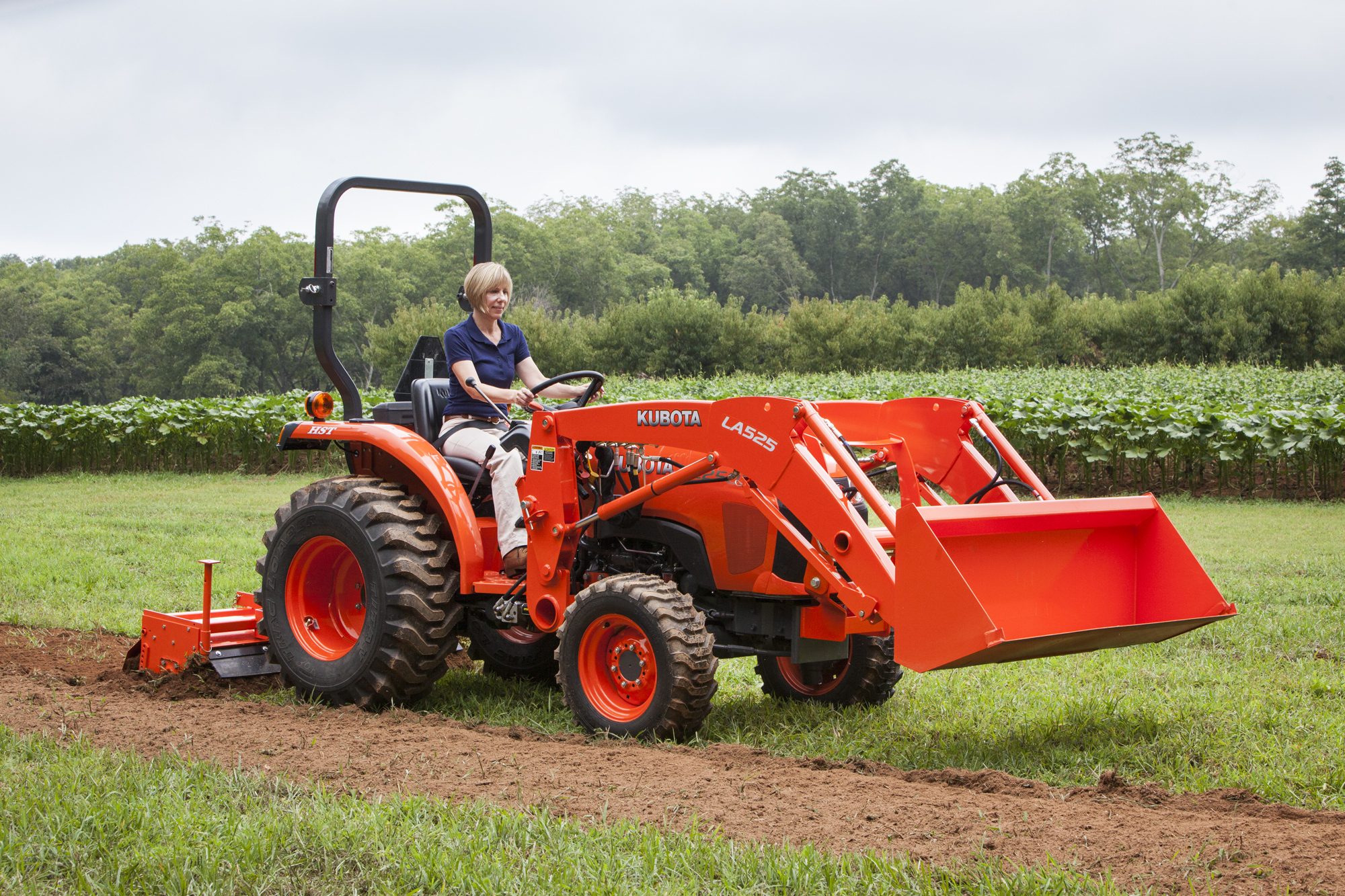 Tire options also can affect price. Choices include the traditional bar-type agricultural tire, the versatile industrial tire and various turf tires. According to Kershner, U.S. buyers of compact tractors think big when it comes to tires. “Americans like beefy tires, the bigger the better.” Cabs are not a frugal choice for dollar-conscious buyers. However, sunshades are relatively economical, with choices running from plastic to fiberglass to metal. Ten to 20 percent of Massey Ferguson utility tractor buyers buy a shade, according to Morris.

In the end, manufacturers insist there is no correlation between “economy” and quality. “Price does not necessarily dictate durability,” says Kioti’s Propst. “In the case of the CK10 Series, you can expect the same durability and dependability of a premium model.”

“Some things we don’t compromise on,” says Kershner at John Deere. “We do not distinguish between our standard and premium models in terms of quality. The horsepower typically is the same, the lift capacity of the three-point hitch and front-end loader are really close to the same torque, power steering — there’s not a lot under the hood that isn’t the same.”

“One thing that remains constant when buying a Kubota,” says Cockroft, “is top-of-the-line quality, durability and reliability. All Kubota tractors are built to last.”

“From a durability standpoint, there are no distinctions made between basic and premium Massey Ferguson tractors,” says Morris, “only comfort and convenience.”

Giles Lambertson is a freelance writer for  Compact Equipment.