The Hot Markets and Popular Equipment of the 2016 Rental Industry 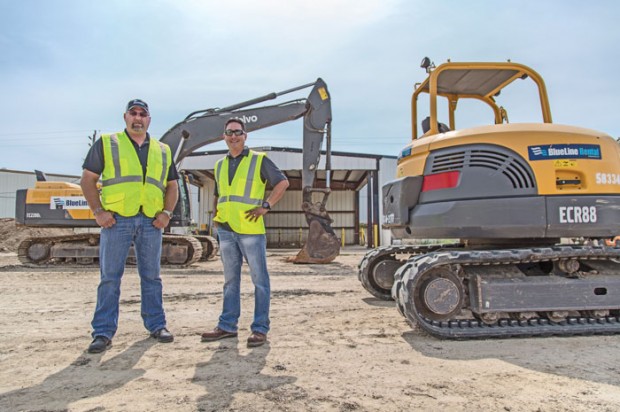 “Rent” is a four-letter word that nevertheless continues to spark good feelings among equipment company executives and their customers. In 2016, compact machinery will again lead the economic swerve toward renting instead of buying construction and industrial machinery. Equipment rental revenue was up 7.6 percent last year, according to American Rental Association data collectors, and is expected to climb by similar increments in each of the next three years. Economic uncertainty is still making renting attractive — and compact machines tend to leave the rental lot before larger ones.

“Compact machinery is among the first equipment deployed on a jobsite, allowing us to get on a job in the early stages and remain throughout the duration of the project,” says Shane Waguespack, senior vice president for rental operations at H&E Equipment Services, adding that compacts offer other positives. “Because the cycle of compact equipment use on a job is pretty fast, the return on assets is there, and we have a product line we view as very attractive.”

The “attractive” compact line is exhaustive and includes Bomag and Hamm compactors, Bobcat, Doosan, Komatsu, Yanmar, Gehl and Takeuchi compact earthmoving equipment, and Polaris and Cushman specialty vehicles. Waguespack calls compact rentals “a significant component of H&E business. We have 77 stores and 73 of them will offer compact equipment.”

The past year saw the largest-ever annual growth for Baton Rouge-based H&E, but across the country the rental market still is uneven. In the New York-New Jersey market, for example, 2015 was “sort of a flat year,” according to Mike Anderson, vice president and general manager of New York operations for Hoffman Equipment. “We did do more compact business than the year before, though, with increased housing starts helping business.”

Anderson credits the “tenuous” economy with sustaining Hoffman’s JCB and Case equipment rentals. “People are hesitant to buy. I am not exactly talking to a ton of guys who say they are booked for the next two years. Things are more difficult in this recovery than in other recoveries. That’s the feeling that permeates this market.”

Hoffman does not see much changing in 2016. “I can only speak to my markets around here, but I think the economy is going to contract a bit with the elections and all,” he says. The country’s economic weakness is not a general benefit, of course, but it clearly has helped move compact equipment off rental lots. This is even true in places like Houston, which has been a resilient equipment market thanks to downstream oil and gas economic activity and commercial and industrial construction.

“Houston definitely held its own a lot better than other places in the country,” says Ben Arbeiter, BlueLine Rental’s Houston sales manager. BlueLine is the new name for Volvo Rents, after an ownership change came in 2014. The company’s $1.4 billion inventory is spread among 140 locations and includes such compact equipment manufacturers as Ditch Witch, John Deere, Volvo, Bobcat, Vermeer, JLG and Allmand Brothers.

According to the Rouse Rental Index, rental rates nationwide have climbed about 25 percent since January 2011.

So what is moving compact machinery? Arbeiter believes that brand names vie with service in attracting equipment renters. “Our customers are not so much brand-loyal as loyal to a place where they can rent quality equipment and good service. If equipment failure keeps a customer from completing a job in a timely fashion, the rental transaction is not a good value proposition for him or her.”

“Quality equipment” sometimes means newer equipment. Age in this case is defined as the number of months a piece of equipment has been in a fleet. According to the November Rouse Rental Report, the industry average age is 41.8 months, or almost three and a half years. The fleet average at H&E is 32 months, leading Waguespack to claim the company has “the youngest fleet age by far among our competition, which means greater reliability and safety for customers.”

The 27,800 pieces of H&E inventory are shifted as needed among the 77 locations. Waguespack says the toughest to keep in the yard are compact excavators in the 3.5- to 5-ton range. He also says renters of compact loaders are favoring tracked machines over skid steers. “We’ve seen good growth in the ratio of track loaders versus skid steers. It is 70/30 now and was closer to 40/60 in favor of skid steers five years ago.”

Rental cost ultimately depends on a regional marketplace, the type and size of a machine and length of a rental. The rate schedule “declined dramatically going back to 2008 to 2009,” says Waguespack. “Since then, the entire rental industry has done a good job of raising rates to keep up with the increasing cost of machines. Is there still room to grow? Absolutely.”

According to the Rouse Rental Index, rates nationwide have climbed about 25 percent since January 2011. Anderson confirms that Hoffman Equipment’s New York market “has seen some easing of downward pressure on rents. Rents improved for us last year, with compact excavators rented for about $350 a day and skid steers for $300.”

BlueLine’s Arbeiter says price fluctuation “can depend upon construction cycles during the year. There is, but it is supply and demand. It is economics. When there is a lot of fleet to be rented, a renter has a better chance of getting a lower rate. Arbeiter adds, “We also work with individual customers. Pricing can depend upon the volume of business a customer brings.” 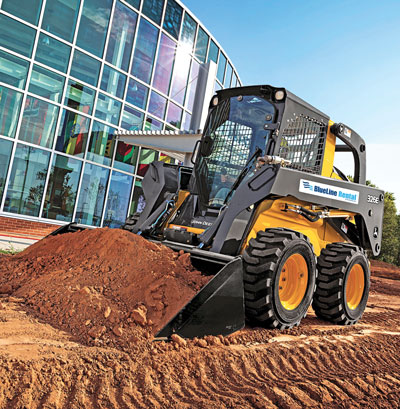 Clearly, not all customers are created equal. Property owners wanting to rent a skid steer for a day are not a favored category among commercial rental companies. BlueLine “does a little bit of renting to property owners,” Arbeiter says. Hoffman Equipment and H&E do none. Most equipment rental efforts target midsize-to-large contractors and companies that want a machine for a week or a month or more.

Some customers end up buying a machine, which certainly isn’t discouraged. In fact, says Bob Slay, H&E senior vice president for earthmoving equipment, “We sell a majority of what we rent. We buy equipment, rent it and then sell it out of the rental system. Where we are a dealer for a specific brand, we tend to see more rent-to-own business from customers.”

BlueLine just entered the sales side of rentals so it could respond to impulse sales opportunities. “A lot of time a renter is demoing a machine, working with it, giving it a good run-through and making sure it operates to his or her satisfaction and suddenly the person is ready to buy it,” Arbeiter says. BlueLine found that deferring such sales was a bad idea. “We do a mix of auctioning equipment and selling it directly to a customer. We have found that, typically, there is a little bit higher return for us if we sell it ourselves.”

As for the customer who not only doesn’t want to buy a machine, but — oops! — has dumped it in a pond, that’s a whole different story. “We have a limited damage waiver. There is a checklist when a machine leaves the yard and a customer inspects the machine upon delivery and agrees to its condition. We want it returned in the same condition,” Arbeiter says simply, adding that “such things don’t happen often. Our BlueLine customers are very stand-up people, and we always reach equitable solutions.”