How important is service at Southeastern Equipment Co.? The company’s 18 locations throughout Ohio, Indiana, Michigan and Kentucky are situated mostly for service convenience rather than sales territory penetration. Here’s another: Training of service technicians is one of the biggest ongoing company expenses.

“I know it sounds like a cliché, but if we can’t maintain equipment well, our customers aren’t coming back,” says John Mahon, Southeastern’s general service manager. “It’s always been that way. We’ve always put customer service out front.”

Even with service shops within an hour of most customers and a fleet of service trucks constantly rolling, Southeastern still is pressed to service what it sells. Its lineup for compact equipment alone includes products from Case, Kobelco, Kubota, Hyundai, New Holland, Genie and JLG, with popular machines ranging from skid steers and track loaders to compact telehandlers.

The increasingly sophisticated equipment has spurred growth of service work, according to Mahon. “Technology hasn’t made anything easier on the service department. In fact, it has made it more difficult for everybody. Customers have to come back to us for a lot of work they used to do on their own.”

That’s good for Southeastern’s revenue picture, of course, but costly for customers. Equipment owners either upgrade their own shops or rely on dealers. Southeastern has dedicated itself to being the most attractive service option. Southeastern field technicians respond to trouble behind the wheel of one of 35 utility-bodied service trucks — including 19,000-lb gross weight Ford-550 units with crane, compressor, welder and torches. On a recent morning, senior field service tech Jay Hager left the Brunswick, Ohio, shop headed to a worksite to see why there was smoke in the cab of a Gradall.

“It’s something about the gauges, something burning,” Hager guessed before heading out. “More than likely something broke through a wiring harness, something electrical. It’s always a challenge to see what the problem is.” 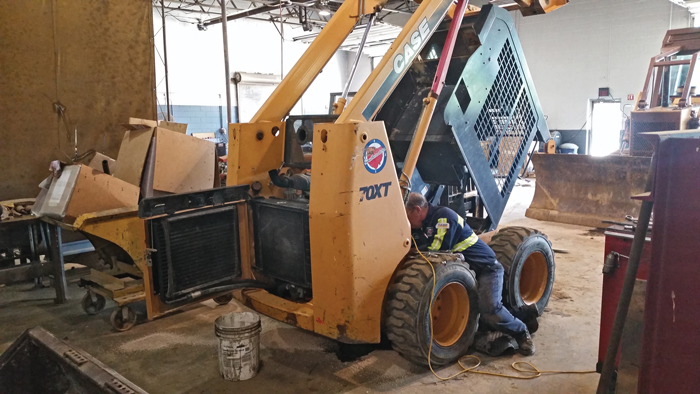 Hager has been investigating malfunctions for 28 years, mostly at Southeastern. The nature of a problem doesn’t really matter to him, though he admits to relishing electrical issues, which can be a “brain-teaser.”

Trouble-shooting is a skill, partly instinctive, partly learned. “To be a consistently good investigator,” says Hager, “you have to have a lot of basic knowledge in the [technician] field, know a little bit about each piece of machinery and learn to follow a trail. I always had a good thinking process, but mastering schematics was a learning process. And it used to be an engine or system had one page of schematics; now there are three or four.”

Southeastern is intent on helping its technicians master schematics, as well as machine settings, hydraulic analysis, undercarriage function and all the rest. Some 3,000 man-hours of training are annually invested in 60 technicians. A small training building was replaced a decade ago with an 8,000-sq-ft standalone facility near company headquarters in Cambridge, Ohio. It contains a classroom that seats 200 technicians (or customers) and several working bays, noting that training sessions are usually limited to 25 people.

“Rather than send technicians to the factory, we have factory trainers do the training at our facility. It’s a lot cheaper,” Mahon says, adding that the stand-alone center is within driving distance of each Southeastern location. “Some senior technicians go three times a year, but everyone goes at least once each year.”

The emergence of compact equipment as core machines in a fleet hasn’t greatly altered the service regimen at Southeastern except to claim a larger share of it; some months, about 15 percent of work at Brunswick is on compacts, for example. Mahon describes the small machines as “high maintenance” because they are “high production” equipment. Company service techs also maintain some 300 compact machines in Southeastern’s rental fleet.

The technicians are generalists, fixing whatever needs fixing. “I guess we specialize in everything we have,” is how Dan Vale, service/operations manager at Southeastern’s Brunswick location, puts it. “Technicians here work on anything that comes in the door.”

Cross-training is the norm, Mahon agrees, but a tech who expresses a preference or shows special affinity for one task or another may be assigned accordingly. The day is fast approaching, Mahon adds, when maintenance and repair will require pairing of techs to individual machines.

“Whether we like it or not, we are going to have to go to more specialization. Equipment is getting more complicated all the time.” 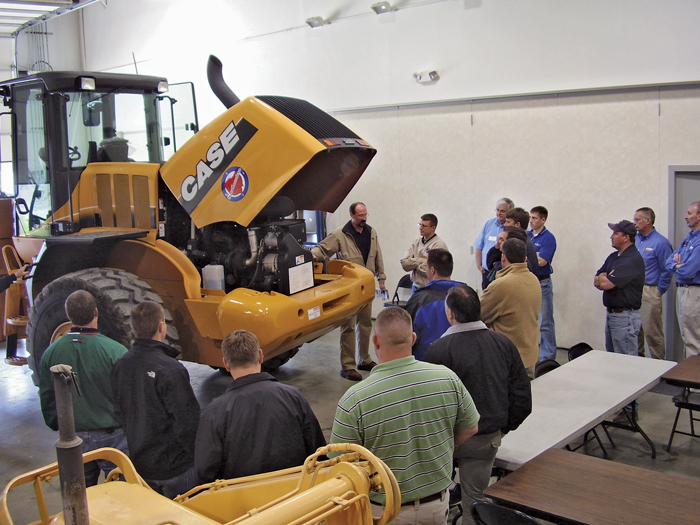 Couldn’t a future measure of “progress” mean a new machine is less complicated? Mahon laughs at the idea. “That hasn’t happened.”

Southeastern’s Brunswick location — where three-quarters of service is repair work — has three full-time technicians and one part-timer. Vale says his first responsibility as manager is to ensure that technicians are qualified and trained. “If you have that, it doesn’t matter as much about the shop facility.”

A typical Southeastern shop has a half dozen equipment bays and a full complement of diagnostic equipment to penetrate today’s electronics. Nearly every tech — certainly each field tech — has a laptop with an electronic service tool on it. The portable computers were utilized even before Tier emissions protocols demanded it.

“The biggest problem working on machines is diagnosing, not fixing,” says Mahon, who started out as a mechanic 32 years ago. “Computers can pinpoint a systemic problem,” he says, “but they don’t tell you what part to change. You have to have a lot of skill in diagnostics.”

The company shops have “a pretty stable group of technicians,” Mahon says. “You can tell when techs are not happy. They leave. They don’t hang around, and we have some really senior guys.”

Senior field service tech Jerry Seib has been fixing machines since 1977 and at Southeastern since 1996. “I work on cylinders one day and gaskets the next, an electrical system the day after, a transmission down the road. It keeps things interesting. I don’t get bored. The best feeling is to be given a machine that’s down and get it running.”

Most projects are completed in one day. In his years at Brunswick, he has seen tools get easier to use, truck-mounted equipment handier and utility truck bodies tighter to keep out rain. “And managers have learned to schedule things a little better,” says Seib.

Compact equipment has grown more numerous, of course, and Seib acknowledges the smaller machines bring their own headaches. “Space limitations are the biggest thing,” he says. “Manufacturers put everything into such a small space. It makes them very difficult to work on.”
The old mechanics’ trick of fabricating a needed tool sometimes comes into play. “If you can’t get in there, you make a link, or get out the torch and bend a tool around till it works.”

The good news is that some manufacturers — Seib cites Case and Kobelco — are responsive to complaints about tech access and other issues. Southeastern’s factory-training sessions have proven to be good exchange points for company technicians and manufacturer engineers. Another surprising tool is the smartphone. Hager pulls out his company phone and takes pictures of a machine in various stages of dismantling and reassembly. The visual record helps him stay organized, especially if he is back and forth between two projects.

He also relies on an old technology — books. “When I am stumped on the road or in the shop, I’ll just take the book home at night and study it. We have a lot of customer base paying an hourly rate, and I want to give them the best bang for the buck.”

Telematics are not yet a game changer at Southeastern, according to Vale. “We probably have 10 machines that have telematics equipment on them, maybe 50 or 60 machines at all locations,” the Brunswick service manager says. All of the telematics-equipped machines are monitored from a company shop at Mansfield, Ohio. “It is going to have to be a game-changer in the sales department first.”

Regardless of technology, Vale doesn’t see a day when service will cease to be essential. “You always are going to need someone to repair equipment. As long as you have people who, I’ll put this as nicely as I can, people who don’t really care about their equipment, who don’t own it, you will need someone to service the equipment and keep it running.”