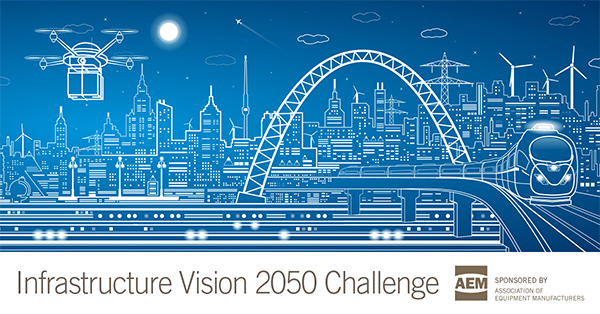 The Association of Equipment Manufacturers (AEM) recently announced the Infrastructure Vision 2050 Challenge — a three-phased, crowd-sourced competition to award a total of $150,000 in prizes for innovative ideas to overhaul the crumbling infrastructure that Americans rely upon to move people, materials, products, services and information.

“The United States is the strongest and largest economy in the world and yet the overall quality of our infrastructure is falling dramatically behind our global competitors,” said Dennis Slater, AEM president. “AEM’s members thought it was time to break the cycle of patchwork fixes and deferred maintenance and lead the conversation in a different direction.”

“We need to engage innovators who we haven’t heard from before and who have the ability to imagine how people, freight, energy and information will move in the country of tomorrow – even as far out as the year 2050,” Slater added. “With the HeroX crowdsourcing model, we’re confident we can bring these solutions to life.”

“HeroX was founded on our conviction that the crowd — everyday people with great ideas — can and will solve the world’s most pressing problems,” said HeroX CEO, Christian Cotichini. “The Infrastructure Vision 2050 Challenge moves the U.S. infrastructure conversation beyond traditional political channels for the first time and gives everyone affected by these issues a chance to voice their opinions and find solutions.”

The American Society of Civil Engineers’ 2013 Report Card for America’s Infrastructure gave the U.S. a combined grade of D+ for the condition of its infrastructure. The report cites the nation’s 70,000 (one-in-nine) structurally-deficient bridges, the fact that 42% of America’s major urban highways remain congested, costing the economy an estimated $101 billion in wasted time and fuel annually, and an estimated 240,000 annual water main breaks as examples for why rebuilding the country’s infrastructure is such a critical issue. The report further estimates that it would take a $3.6 trillion investment by 2020 to bring U.S. infrastructure up to exceptional standards.

Finalists and winners of the three-phased Infrastructure Vision 2050 Challenge will be determined by a judging panel and crowd voting. The first two phases launch today. The third phase is scheduled to launch in mid-summer, 2016.

First phase: The “Complain Phase” will engage the public to describe the biggest infrastructure challenge facing their community.

Second phase: The “Dream Phase” will seek to solicit new thinking and solutions, especially from non-experts.

Third phase: The “Build Phase” takes the second phase a step further and solicits plans to implement those solutions on a larger scale.

For more great coverage of AEM, click this link. You’ll be sorry if you don’t.