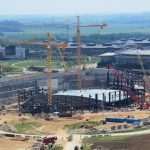 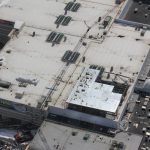 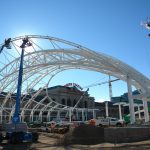 LPR Construction Co., Loveland, Colo., was named the winner of the Class I (Under $500,000) Project of the Year category for the Denver Union Station Train Canopy.

An independent panel of judges selected the four companies whose project received the Steel Erectors Association of America (SEAA) 2013 Project of the Year awards.

“Since the contest’s inception more than 10 years ago, SEAA has recognized complex and unique steel erection projects throughout the world. Past projects demonstrated successful completion while overcoming unusual conditions, tight time constraints, or other challenges. The 2013 winners reflect the importance of safety while sticking to the job’s schedule,” says Tom Underhill, executive director of the Winston-Salem, N.C.-based organization.

The visual centerpiece of Denver’s transit center project in Lower Downtown’s residential and nightlife district is the canopy of Train Hall. The sculptural canopy is supported by a skeleton of steel tubes, a curving structure that is 70 ft tall at each end and 22 ft tall in the center. Its length is nearly 1.5 football fields long.

LPR Construction worked within a 10-month long erection process that had to be precisely orchestrated as the project involved extremely tight site constraints, and concurrent construction of the RTD bus station within the footprint of the Train Hall below grade. The canopy is held up by 32 arched cantilevered steel trusses of various lengths and 11 arched steel trusses that span 176 ft and are raised about 18 ft above the pedestrian level. The trusses are held together by thousands of pinned, bolted and welded joints and are supported by A-frame “kickstand” column pairs that cantilever out of the ground and carry the loads down to the pile foundations.

To erect the interior-most trusses, LPR Construction utilized a single shoring post and guy cables to stabilize and erect the first truss in two halves. The remaining nine trusses were erected in a single full length piece. Each subsequent full span truss was tied back to the preceding truss with permanent bracing prior to release of the crane and the two were stabilized as a pair. By combining this well-thought out strategy with careful execution, LPR was able to control direction and flow of erection by utilizing permanent bracing and eliminating the need for additional temporary bracing.

Regal Entertainment Group wanted to add IMAX and RPX theaters to the company’s 17-screen complex in time for the premier of Superman: Man of Steel. Remaining on schedule was a priority in order to meet with the release of the movie. The challenge was to complete work while the mall remained fully operational during the harsh, winter months. All steel was erected in the blind. Many pieces weighed 11,000 pounds and the crane was lifting at close to maximum capacity at its 300-ft radius.

JPW worked closely with mall management and security to coordinate traffic (22 million people annually visit the sixth largest mall in the U.S.) where a 300-ton Link-Belt crawler crane with 400 ft boom was assembled, operated, and disassembled.

The project consisted of removing 16,500 sq. ft. of roof, raising it 50 ft, and adding two additional floors. In addition to the challenge of working in close proximity to the public, severe cold weather threatened to hinder production. Wind chill was such that, at times, workers were limited to one-hour shifts to avoid frost bite. Snow and ice formed on flanges, in webs of beams, and on decks making an already dangerous job even more so, requiring the areas to be cleaned before work could begin.

Deep Space is an 11,400 seat auditorium for Epic Systems Inc., a medical software company in Verona, Wis. The auditorium was built for the company’s Annual User Group Meeting, monthly staff meetings, and events on the 811 acre campus. The 830,000 sq. ft. auditorium contains more than 17,000 tons of structural steel.

Epic wanted the auditorium to look invisible, as if it were a cave carved into a hill. Deep Space stands five stories tall, but from the southeast it appears to be below ground. From the west, a glass curtain wall with stone façade resembles a natural cave. Deep Space also features a 6-acre rolling green roof allowing people to walk on top of the building. The roof is a free span design measuring 110 ft. wide at the front and more than 650 ft. along the back radius with trusses spanning up to 280 ft.

JP Cullen’s team developed an unconventional solution for constructing the roof. Steel erection began with assembly of the auditorium’s long-span roof on the ground of the 80-ft deep “hole” in which Deep Space was constructed. That was followed by erection of the surrounding 5-story structure. The 9 million pound roof system was lifted vertically with strand jacks from the ground to its permanent location. Constructing the roof on the ground provided safer access to the work. It also allowed mechanical, electrical, plumbing, and fire protection trades to install all their systems within the roof, as well as steel for catwalks and audio-visual supports, prior to erection of the roof itself.

Scheduling proved to be one of the biggest challenges of the project, given its complexity and the owner’s timeframe. Integrated project delivery was used to supply the steel to the site in the quickest possible manner. At peak production, more than 1,000 trade workers were on site. Ultimately, detailed planning and coordination proved successful as the project was delivered in time for the Annual User Group Meeting, an event that brings thousands of Epic’s clients from around the world to Verona, Wis. The Greater Madison Convention & Visitors Bureau estimates the economic impact of User Group Meeting at $6.5 million, second only to the World Dairy Expo.

Central to Peterson Beckner being selected for the project was the development of a project specific safety plan that provided safe access for employees of PBI as well as ExxonMobile and General Contractor, Gilbane/Harvey. PBI’s safety plan featured a scaffolding system that enabled safe access to specific connection points and transport between work points. The entire system was engineered and the steel fabricator attached hundreds of clips for scaffolds, individual retractable reel safety devices, and horizontal life lines.

“Probably the most daunting task was to properly position the heavy node weldments, which in many cases had six members framing into them. If the columns weren’t kept close to perfectly plumb, and all bearing surfaces properly seated, the geometry of the framing of the heavy braced lines above would result in major problems down the line,” says Craig Peterson, project manager.

Careful attention to placement of mill to bear members and proper welding procedures resulted in final location of Cube trusses, including expected deflections, within 1-in. of theoretical in all directions.

Founded in 1972, SEAA is the only national trade association representing the interests of steel erectors, fabricators, contractors, and related service providers. The association promotes safety, education and training programs for steel erector trades, including its Ironworker Craft Training curriculum. The association works in partnership with other steel construction, design, and steel product organizations to protect the interests of those who construct steel structures. Learn more at seaa.net.