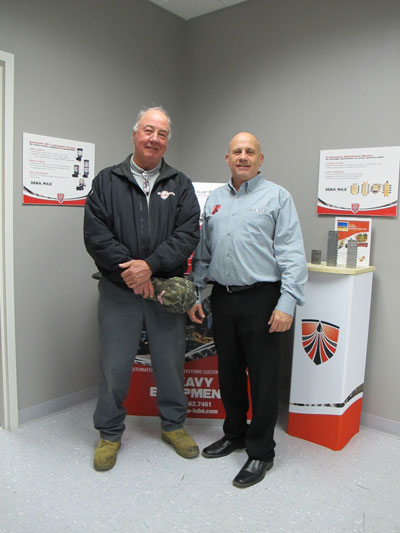 John Goodridge is on a mission to introduce farmers, contractors and municipalities to the dollar and sense of adding automatic lubrication to their equipment that runs day in and day out. “I got to know the Beka-Max system because of my past experience being a John Deere dealer,” he recounted. “They became standard equipment on the self-propelled forage harvesters, and during all that time, due to their reliability and robustness, we never had any service calls because the lube system was not working.”

Still in the field

After 30 years in the farm equipment industry, Goodridge is now working for his son as a salesman at George & Swede Sales and Service Inc., in the heavy equipment business. However he is still selling to farmers in addition to contractors and municipalities. George & Swede Sales and Service, in Pavilion, NY, serves 17 western and central New York counties and represents Hyundai, Link Belt, Yanmar, other short line manufacturers and Beka-Max.

Goodridge has always enjoyed the relationships he has built over the years with the farm community and gravitates to those people. Whatever the size of the farm, they all seem to grow, forcing them to be more efficient and to do more in the same amount of time. “As these are machines, there will always be downtime, but it can be minimized. The Beka-Max system is just another way to ensure as much “uptime” as possible. Maybe not for every machine, but critical for those key machines that cannot afford to be down,” says Goodridge.

“It really hit home the other day when I had to tell a farmer he needed $30,000 to repair the damage to his wheel loader from the lack of grease. I called Beka-Max and the sales rep came out and I figured out what the cost would be for a new loader. Based on his recent experience, at approximately $7,000 installed, the Beka-Max system was a ‘no brainer’.” Goodridge reports that together with Beka-Max, he recently delivered and installed autolube systems on three loaders, a manure spreader, a feed truck, and an Oxbo hay merger. “I’m sure more will come,” he concluded.

According to Dave McDougall, “Anytime you can take the human factor out of a task and have it done with automation, it saves valuable time for everyone. It also allows you to be more efficient and the payback adds to the bottom line.”